The plea was filed by Nisar Sayyad who lost his son in the 2008 Malegaon blast. In his plea before the special court, Sayyad had mentioned that a petition seeking cancellation of Thakur's bail is pending before the Supreme Court 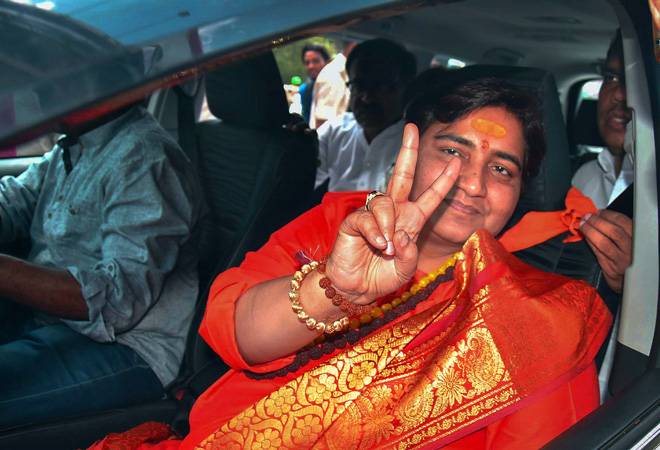 The special NIA court said that it was not the right forum for such a plea. Photo credit: PTI

A special National Investigation Agency (NIA) court in Mumbai rejected a plea seeking to bar BJP leader Pragya Singh Thakur from contesting the 2019 Lok Sabha election. Thakur, popularly known as Sadhvi Pragya, is one of the prime accused in Malegaon blast case and is out on bail. Thakur is contesting the General Elections on BJP ticket from Bhopal, where she is facing senior Congress leader Digvijay Singh.

The plea was filed by Nisar Sayyad who lost his son in the 2008 Malegaon blast. In his plea before the special court, Sayyad had mentioned that a petition seeking cancellation of Thakur's bail is pending before the Supreme Court.

Rejecting the application against Sadhvi Pragya, special judge for NIA cases VS Padalkar said lawyers were well aware that this was not the proper forum for such a plea. "This court has not granted bail... wrong forum has been chosen," he said.

In his application, Sayyad said Thakur got bail on health grounds. He said that if Thakur is healthy enough to fight elections in the crippling summer's heat, then she has misled the court.

Responding to it, Thakur's lawyer JP Mishra said that Thakur got bail on merit along with medical grounds. He added that she is contesting the poll, attending meetings and campaigning, but a doctor is always present with her round the clock.

"Thakur has not misled the court. After the court's order (on bail), she underwent an operation and was unable to walk in 2016. Her condition has improved now, but she has not fully recovered," Mishra said.

Six people were killed and over 100 injured in a bomb blast at Malegaon, a communally sensitive textile town in north Maharashtra's Nashik district, on September 29, 2008. The Maharashtra Anti-Terrorism Squad (ATS) arrested Thakur and others in the case, alleging they were part of a Hindu extremist group which carried out the blast. The NIA later gave Thakur a clean chit, but the court did not discharge Thakur.

It dropped charges against her under the stringent Maharashtra Control of Organised Crime Act (MCOCA), but she is still facing trial under the Unlawful Activities (Prevention) Act and Indian Penal Code sections.

ALSO READ:Ticket to Sadhvi Pragya answer to those who branded 5,000-year-old civilisation as terrorism: PM Modi