The sale of Ambergris is prohibited by law as the sperm whale is an endangered species which is protected under the Wildlife Protection Act. 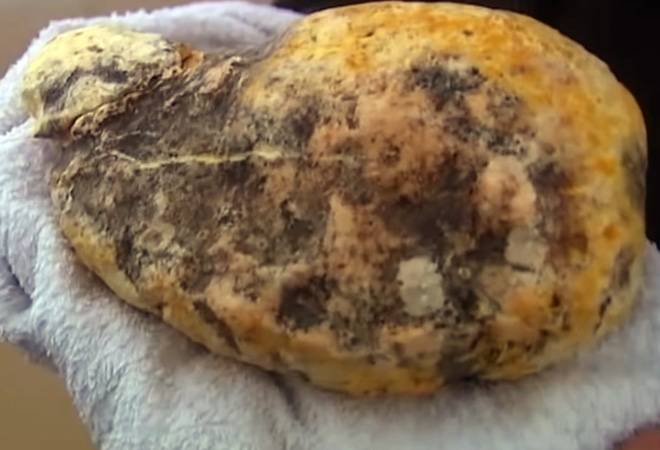 Mumbai police has arrested a 53-year-old man in possession of 1.3 kg of extremely rare Ambergris (whale puke) worth Rs 1.7 crore.

Mumbai police has arrested a 53-year-old man in possession of 1.3 kg of extremely rare Ambergris (whale puke) worth Rs 1.7 crore. The man had come to the city to sell it in the illicit market. A joint team of police and forest department officials got a tip-off and apprehended the man Rahul Dupare on Saturday in the Cama Lane of Suburban Vidyavihar area, police said.

"We seized 1.3 kg of ambergris, worth Rs. 1.7 crore, from him. It is a prohibited item. We have registered a case under relevant sections of the Wildlife Protection Act and have arrested Dupare," a police official told PTI.

Ambergris also called ambergrease, or grey amber is whale vomit which is a solid, waxy and flammable substance and is dull grey or blackish in colour. However, it is believed to be passed either as spew or faeces.

How is it produced?

It is a very costly wax that is produced as a secretion in the intestines (digestive system) of the sperm whale. The whale produces it to protect its gut from very sharp beaks of squid it prays on in the ocean. The substance acquires a sweet, earthy scent as it ages.

Where is it found?

The substance also described as floating gold is found afloat the tropical seas and is used as a fixative in perfumes as it is slowest in evaporating. Although Ambergris can be found on the ocean surface, the police suspects that it might possibly be secured by killing sperm whales. However, the substance is quite difficult to find and is normally exported to the gulf as it gets very high prices there.

What is it used for?

Since Ambergris is soluble in alcohol, chloroform, ether and certain volatile and fixed oils, it is commonly used as a fixative in the manufacture of rare perfumes and fragrances like musk. It makes a scent last longer. There also is a superstition that burning Ambergris for good scent makes a person rich. Dogs are known to get attracted to its smell and hence are sometimes used by ambergris searchers.

Why is it illegal?

Also Read: Maharashtra on high alert after blast near Mumbai; IED found on bus in Raigad