Most newspapers across the border have by and large accused India of provocation as well as exaggerating the scope and success of the IAF's -dawn raid on terror camps across the LoC yesterday. 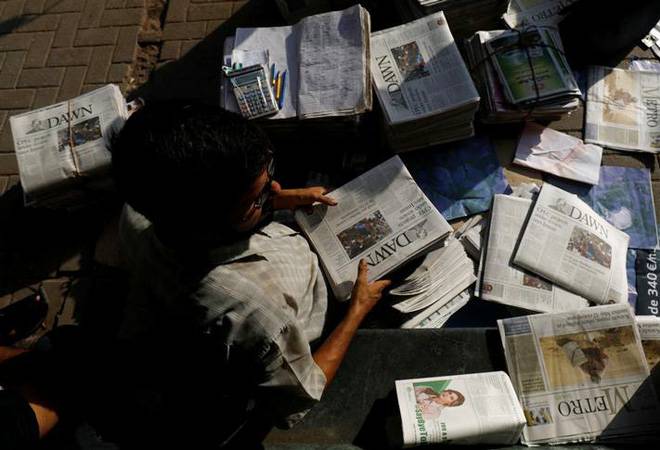 The Pakistani newspapers have put the blame on India for the escalation in tension with Pakistan following the Indian Air Force's punitive action against terror camps across the LoC.

"It is a wildly provocative and shockingly aggressive act - and the potential repercussions may extend to the hitherto unthinkable possibility of war itself between the two South Asian neighbours," read the editorial in Dawn, a leading newspaper across the border. "With good sense having failed to prevail in India, the whole region now stands on the threshold of the unknown."

Similarly, according to the Pakistan Observer, "Regardless of Pakistan's repeated peace offers, India is bent upon undermining the regional peace and security through its provocative acts and statements".

According to The Nation, the IAF "bombed an empty hilltop and hastily left once Pakistani jets were scrambled" but was quick to add that it represents "an escalation of another kind". The newspaper, one of Pakistan's most popular ones, also said that "This is the first time Pakistani airspace has been violated since 1971, and the territory targeted is in a province other than Azad Kashmir. It would be no stretch of imagination to construe this as an act of war."

For the Pakistan Observer, the IAF raid was a "clear act of aggression" that was "challenged by vigilant Pakistan Air Force", which prompted our jets to drop their payload near Balakot. "To cover up the disgrace it [was] meted out on the LOC, the Indian side is once again presenting a totally false and concocted story to hoodwink its public as well as the world," the editorial added.

Dawn is the only major publication that has acknowledged that "there are duelling official Indian and Pakistani version of events of what occurred on Tuesday morning", adding that "Few, if any, facts are publicly established  when there are claims and counter-claims of military action along the LoC."

The Nation claimed that "with the elections around the corner the government had to do something, anything to make it seem like they were responding" and that "Pakistanis have been waiting to see what manner of fictitious "surgical strike" will be launched this time".

But while the paper essentially accused India of lying, Dawn went a step further saying, "Surely, any remotely rational Indian policymaker or public figure would have recognised that Pakistan would reserve the right to retaliate against an attack on this country's sovereign territory, but it does not appear that there are any rational Indian policymakers or public figures left."

While several Pakistani dailies accused the Indian media of "virulent attacks" on their country and constantly pointing a finger at it, The Nation, without pulling in any punches, wrote: "As expected this one [surgical strike] was as ineffectual and token as the last; but in the eyes of the Indian media it morphed into an exaggerated fantasy complete with impossible numbers of causalities and claims not backed by any evidence."

Pakistan Today, however, forayed where few other publications wanted to go. "The embarrassing incident should make those who take decisions realise the danger posed by the presence of terrorist networks on Pakistan's territory," read its editorial today. "While supporting the indigenous struggle of the brave Kashmiri people politically and morally Pakistan has to urgently get rid of whatever terrorist networks still exist in Pakistan in a convincing manner. Everyone knows Pakistan has nuclear weapons. No country would however appreciate if we dangle the threat."

"The awful spectacle of the Indian state, overwhelming sections of its media and seemingly swathes of the population celebrating an attack on Pakistan suggests that much of India does not understand what it has potentially triggered," wrote Dawn. While acknowledging that "rational, right-minded and sensible denizens in both countries" would realise the perils of military action by either country, it went on to accuse the "Indian war lobby" of not appreciating or having any regard for "what the outcome of provoking Pakistan into militarily responding to India could be".

According to The News International, the "harsh rhetoric from New Delhi, warning of retaliatory action, has fuelled the fires and prevented a sensible response to the more rational approach taken by Pakistan" while The Nation feels that Pakistan "has been quite admirably stoic in the face of Indian provocations and has remained sagacious enough to urge de-escalation".

But Pakistan Today, once again took a different stand on the topic. "Imran Khan once again proved himself to be no more than a run-of-the mill politician playing to the gallery," said its editorial referring to his warning to Prime Minister Modi. "While he posits as a proud Pathan who always carries out whatever he says, he will have to eat the humble pie by going back on his impolitic statement."