Addressing a traders' convention at Talkatora Stadium in Delhi, PM Modi said that his government has worked to simplify lives and businesses of traders by scraping 1,500 antiquated laws 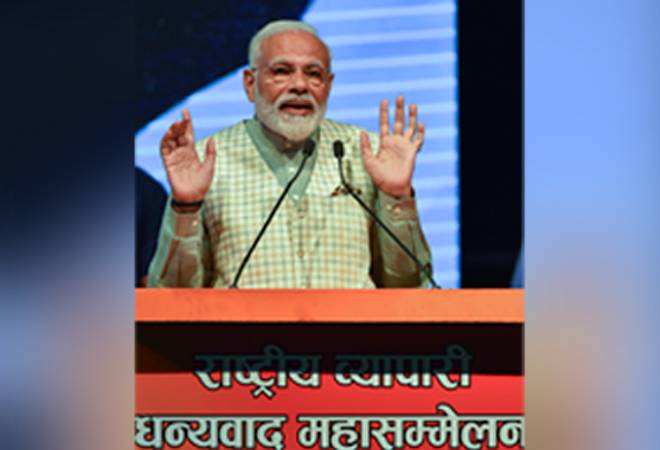 Appeasing the business community, Prime Minister Narendra Modi on Friday reiterated his party's promise to provide loans up to Rs 50-lakh loan without any guarantee to traders, along with credit card facility and a pension scheme for small shopkeepers. Slamming the Congress for calling businessmen "chor", the Prime Minister said the BJP-led NDA government has stood by traders in thick and thin, while the Opposition has abused businessmen by calling all of them thieves.

Modi's reference to "chor businessmen" is related to the verbal spat between the Congress and the BJP after the former called the Prime Minister a thief pretending to be a security guard.

Addressing a traders' convention at Talkatora Stadium in Delhi, PM Modi said that his government has worked to simplify lives and businesses of traders by scraping 1,500 antiquated laws. The government has also simplified the application process to provide easier and time-bound access to loans.

"I am impressed by the hard work of traders... their business has helped the economy bloom," he said. "I have tried to make your life and business easy in last five years."

Modi said that traders are "backbone" of the Indian economy and doubling the size of the economy to USD 5 trillion is not possible without their contribution.

Also Read: What the BJP manifesto promises on employment

"I consider you (traders) as the biggest stakeholder of the economy. Opposition parties remember you only on a special occasion," he said.

The saffron party in its manifesto for Lok Sabha Elections 2019 mentioned that it will set up a National Traders Welfare Board, Rs 10 lakh accidental insurance to all GST-registered traders, pension scheme for small traders above the age of 60 years and credit cards to traders on the lines of Kisan Credit Cards.

Why LoC trade ban with Pakistan doesn't mean much