Trump in Delhi: Senior advisor to the POTUS opted for formals today in keeping with the official events scheduled for Day 2. 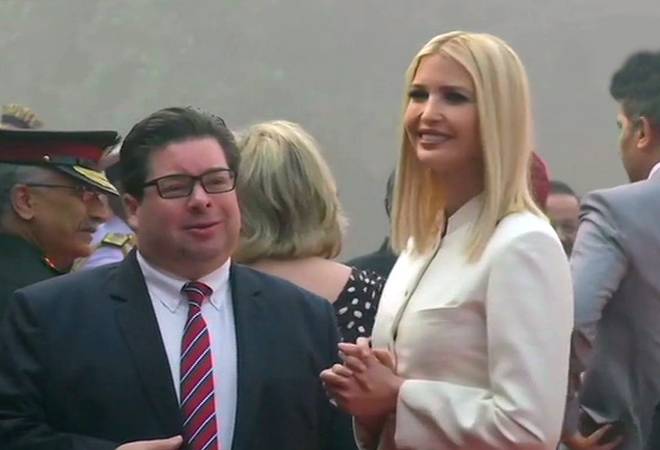 The senior advisor and daughter of the US President Donald Trump, Ivanka Trump was spotted wearing an Indo-Western fusion silk sherwani by designer Anita Dongre ahead of ceremonial reception of the POTUS and the First Lady at the Rashtrapati Bhawan.

The all-white ensemble worn by Ivanka is a tailored full-sleeved bandhgala sherwani made of handwoven Murshidabad silk. The 38-year old senior advisor to the POTUS completed the look with white ballerina flats and mid-parted hair. "Ivanka is wearing a sherwani made out of handwoven silk from Murshidabad, West Bengal. It is timeless, and such a classic," Anita Dongre told India Today about her creation.

Delhi: US President Donald Trump's daughter and senior advisor Ivanka Trump arrives at Rashtrapati Bhavan ahead of the ceremonial reception of the US President. pic.twitter.com/iTyjCRftf2

She wore a button-down white suit as she was spotted interacting with dignitaries at the Rashtrapati Bhawan. The senior advisor to the POTUS opted for formals today in keeping with the official events scheduled for Day 2.

The First Lady also landed at the Ahmedabad airport on February 24 in an all white jumpsuit from Atelier Caito for Herve Pierre. Melania Trump had paired this jumpsuit with a sash made out of green silk and gold metallic thread.

The US President and the First Lady headed to the Sabarmati Ashram to pay tributes to Mahatma Gandhi.  After this, Trump addressed a crowd of over one lakh at the Namaste Trump event held in the Motera stadium.

After touring Taj on the same day, the Trumps flew to Delhi. Today, the POTUS was given a ceremonial welcome at the Rashtrapati Bhawan following which the Trumps headed to Raj Ghat to pay respects to Mahatma Gandhi.  Donald Trump and PM Modi held delegation level talks at the Hyderabad House at around 11:30 am.