Not all institutions and quiet notably, the ones in engineering education hubs such as Telangana, Andhra Pradesh, Karnataka and Tamil Nadu, could fill all seats. Colleges have been shutting down too, a trend that began five to six years ago. 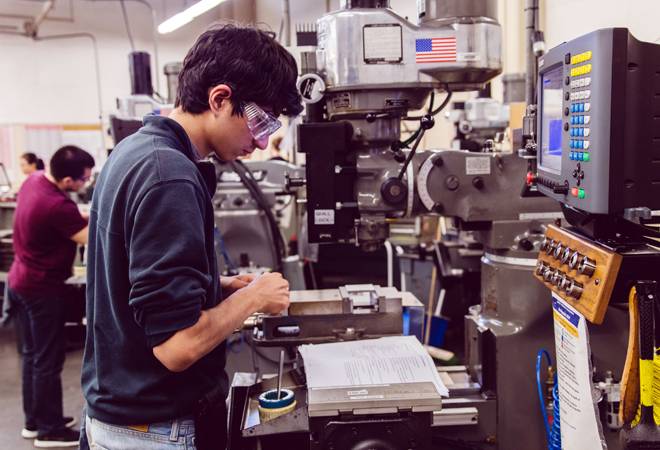 Almost half the seats in undergraduate and postgraduate engineering institutions remained vacant in 2017-18.

It is that time of the year when engineering colleges buzz with activities. The Joint Entrance Examination (JEE) results for entry into IITs and results of other leading Indian private colleges and state government institutions have just been declared. Bright sparks readying to realise their long awaited dream to enroll for a career in engineering are taking to the cyberspace to see where they stand before heading to the college campuses for counselling sessions. But, other than some of leading institutions and some long standing local colleges - both public and private - the mood is a bit sombre and far from comforting.

Not all institutions and quiet notably, the ones in engineering education hubs such as Telangana, Andhra Pradesh, Karnataka and Tamil Nadu, could fill all seats. Colleges have been shutting down too, a trend that had started unfolding about five to six years ago. BVR Mohan Reddy, chairman of the Indian Institute of Technology (IIT), Hyderabad and the founder of Cyient, who headed a government committee on a perspective plan for engineering education in the country submitted the report - Engineering Education in India: Short and Medium Term Perspectives - to government in January this year. He has quoted some worrying numbers. But, he is happy that the government - the All India Council for Technical Education (AICTE) - has started taking note of it.

Reddy points out that going by the AICTE data, all undergraduate and postgraduate engineering institutions put together had a total capacity of 16.62 lakh seats but the intake stood at only 8.18 lakh in 2017-18. Hence, 49.8 per cent of total seats went vacant. Reddy is also quick to remind that while the number 16.62 lakh seems high, it is not the highest number ever. "We touched a high of 19.2 lakh seats in 2014-15." One of the reasons for the decline is oversupply. Some in the industry link it to lowering of entry barriers. For instance, the minimum land required to set up an educational institution in rural areas over two decades ago was 25 acres. The limit has come down to 10 acres now. It is even lesser in metro cities. 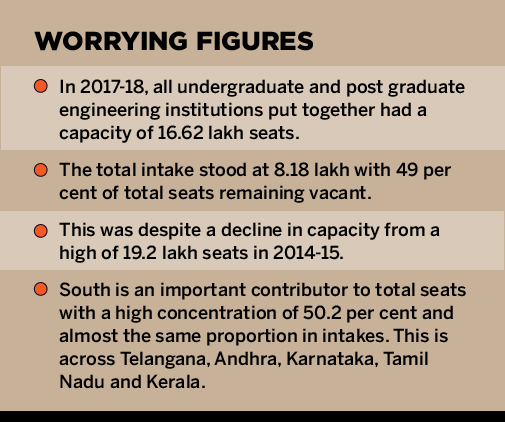 While these institutions are supposed to work as not-for-profit entities with corpus funds and a philanthrophy mindset, not many do it. On top of it, most of them fail to offer jobs or placements at the end of the course. Given the fact that many engineering entities could not attract students, some of those failed to renew their licences as well. If colleges fail to admit more than 30 per cent of their capacity for three consecutive years, they automatically stand to lose their licences and cannot admit more students. Besides, the land and the real estate they invest in would hardly yield any return. In most cases, there were no added attractions to be in the space. For example, incentives such as fee reimbursement for weaker section students under student sponsonship programme had been withdrawn by some states like united Andhra Pradesh (before bifurcation into Telangana and Andhra). All of this put a question mark on their financial viability, especially in cases where there was no corpus fund and a philanthropic mindset to start with.

In the space of engineering education, there is another distinctive feature: The larger play by South India. Reddy says, South is an important contributor to the total seats with a high concentration of 50.2 per cent and almost the same proportion in intakes. This is across Telangana, Andhra, Karnataka, Tamil Nadu and Kerala. The rest of seats are fairly well distributed across the country. Therefore, he says, the important recommendation, among others, was to halt further capacity creation in engineering. Why did this all happen? "What we have ended up with seems to have been a result of an unplanned and aggressive expansion in capacity creation without any focus on building quality faculty," he says.

Part of the reason for the concentration in South, some argue, has to do with the higher literacy rates and relatively higher share of children graduating from schools, at least in most Southern states, which in turn has been the trigger for the opening up of a large number of engineering, medical and MBA colleges there. There is also a captive audience with a lot of companies in the IT sector being concentrated in Bengaluru, Chennai and Hyderabad. "As many as 60 per cent of all engineering and MBA colleges in the country would be from this belt of Telangana, Andhra, Karnataka and Tamil Nadu and if you include Maharashtra, it could be as much as 70 per cent, if not more," says K V Vishnu Raju, chairman, Sri Vishnu Educational Society with its four engineering colleges with an intake of 3000 students with placements achieved for more than 2000 of them each year.

He should know having spent 25 years in this space and having his colleges figure in the ranking of MHRD (Ministry of Human Resource Development)'s NIRF (National Institutional Ranking Framework). He and others also quote US visa trends from Chennai and Hyderabad. They point out that a larger share of students from these regions heading abroad for higher education is another indication of the high appetite for engineering courses in this region.

Raju says roughly about 100 colleges have shut in the South over the past couple of years. He feels the primary reason behind a college failing to survive lies in its inability to offer any differentiation, value for money and most importantly, internships and industry connect, which is crucial for engineering and MBA institutions. Which is why, he says, he has decided to set up their own faculty development institute modelled on the lines of staff training colleges of banks along with a focus on internships.

Part of the problem could be solved, says Reddy, if state governments tighten the monitoring of the quality of engineering education. Telangana government has set an example. According to Reddy, thanks to an active involvement of the state government, most of the colleges in Telangana that were sloppy on quality and had inefficient faculty shut shops in last five years. "In the last five years, the number of engineering colleges have come down from 350 to around 172," he says. Even AICTE, which approves new colleges quite selectively, put out a ban on new capacity creation last year.