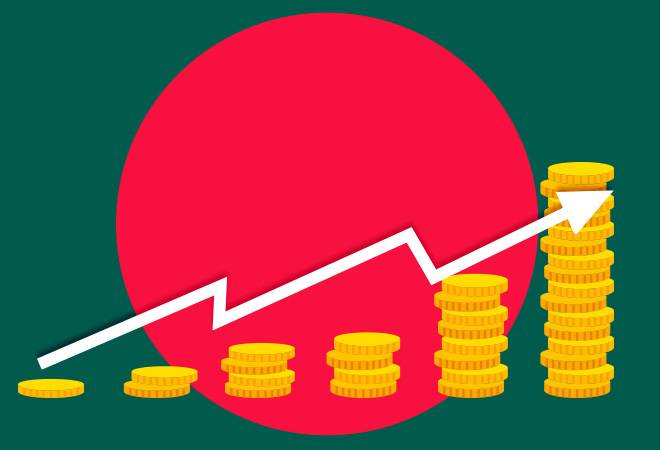 Bangladesh's microfinance operations began in the 1970s in which the Grameen Bank - which won the Nobel Peace prize along with its founder Muhammad Yunus in 2006.

Bangladesh has not only achieved structural transformation with manufacturing and exports driving its growth in output (GDP) and employment but, it has also seen a remarkable rise in social indicators, income levels and entrepreneurship in rural areas in which microfinance institutions have played a predominant role.

A World Bank study of 2014, which looked at the long-term impact of micro-credit programmes, concluded that they helped rural households earn more and consume more, thereby accounting for more than 10% of the total reduction in extreme poverty in a decade between 2000 and 2010. This has helped Bangladesh avoid an increase in income inequality that many developing countries have witnessed.

How did Bangladesh do it?

Bangladesh's microfinance operations began in the 1970s in which the Grameen Bank - which won the Nobel Peace prize along with its founder Muhammad Yunus in 2006 "for their efforts to create economic and social development from below" through micro-credit programmes - and BRAC (earlier known as Bangladesh Rural Advance Committee) played predominant roles and were later joined by others likes the Association of Social Advancement (ASA), transforming the rural social and economic landscape completely.

A Singapore Management University paper of 2008 sheds light on how the Grameen Bank and BRAC, in particular, did it.

For one, it says Yunus built a self-sustaining system of lending and borrowing without collaterals and with minimal default -achieving a repayment rate of 97% on an average. He focussed on village women and organised them to take collective responsibility for the business. Every member was not necessarily borrowing; some were depositing their surplus for lending.

Yunus went on to fund and establish a wide range of business enterprises, both for-profit and non-profit with a social mission - starting from knitwear to software. His efforts "ended up promoting a wave of entrepreneurial activity at the rural level, effectively changing the structure of the Bangladeshi economy". It is the Grameenphone, the telecom major that Yunus started, which brought telecom revolution to rural Bangladesh.

Similarly, the BRAC has played a critical role in transforming rural Bangladesh. Founded by the Magsaysay winner Fazle Hasan Abed, it progressed from rebuilding remotest villages where government aid did not reach to enter healthcare and contributed significantly to reducing child mortality. Abed also funded and established many enterprises running silk production, dairies, hatcheries and others to create employment and income for the rural poor.

Prof Selim Raihan of the University of Dhaka says more than 75% of the microfinance institutions have been found to be engaged in social development programmes with a major focus on education, healthcare, water and sanitation, women empowerment and (economic) development.

Why did no such transformation happen in India despite a huge presence of microfinance institutions?

That would call for a study. Prof Nisha Taneja of the ICRIER says it is remarkable the way these institutions connected at the ground level in Bangladesh, won people's trust and disincentivised default. It is replicable in India, she says, but that would require vision and commitment.

Women have been at the centre of Bangladesh's microfinance institutions.

Prof Kaushik Basu highlights this aspect while explaining Bangladesh's economic boom. He writes that starting with the efforts of microfinance institutions like the Grameen Bank and BRAC, and more recent work by the government, Bangladesh has made significant strides in educating girls, giving women a greater voice in the households and the public sphere.

A 2019 study by the World Bank says the country has made important strides in many dimensions of gender equality, creating opportunities for women and girl from all walks of life - reducing fertility rates, achieved gender parity in schooling and paved the way for millions of women to work in garments sector - in the past decade. So much so that today girls have a better chance than boys of completing school and survive to the age of 60.

It further says that the labour force participation rate for women (FLFP) of 15 years and above has risen from 26% in 2003 to 36% in 2016 "in contrast to most other South Asian countries, where these rates fell". For example, in 2017 the FLFP for India was 27.2% while that for Bangladesh was 33%, according to the UNDP's 2018 updated Human Development Indices and Indicators.

The share of women in Bangladesh's national parliament (with 50 seats reserved for them) has also increased and remains above the regional average of 19.4% in 2017 at 20.3%. Women's representation for the same year in India was 11.6%.

More women now own land and exert more economic control over agricultural land other assets like cattle, houses and non-agricultural land in Bangladesh. "There is marked improvement in society's attitude toward women's asset ownership, which bodes well for women going forward," says the World Bank report - reasoning that women's economic empowerment is linked to poverty reduction as they invest more in children and communities.

All these get reflected in the improvement in health and other indicators. 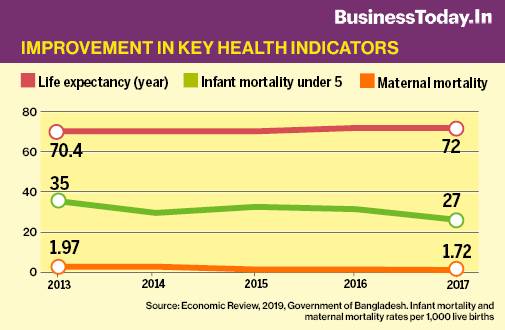 Even in key education indicators, Bangladesh scores over India. When the Global Hunger Index (GHI) by Severity report was released in October, Bangladesh continued to march over India. It scored 25.8 (and ranked 88 among 117 countries) while India's score stood at 30.3 (rank 102).

The GHI measures the level of hunger and under-nutrition on a scale of 0 to 100. Lower the score lower the severity of hunger and malnutrition. Both Bangladesh and India, however, continue to be in the "serious" category.

The graph below traces the movement of the GHI scores of Bangladesh and India since 2000.

Another important report came out in October - the World Bank's first human capital index (HCI) - in which too Bangladesh piped India.

This index measures the productivity of the next generation of workers relative to the benchmark of complete education and full health. An economy in which the average worker achieves both full health and full education potential scores a value of 1.

This is not surprising as Bangladesh has been devoting considerable resources for its social sector developments - on education, health, sports, women's welfare etc. - raising it from 4.4% of the GDP in FY10 to 9.8% in FY19. 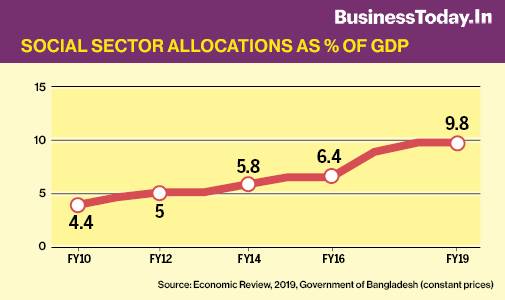 Remittance as a driver of growth

Another key driver has been remittances from Bangladeshis working abroad. This has grown three times from $4.8 billion in FY06 to $15 billion in FY18. It has remained above 5% of the GDP for the past many years as the following graph shows. These remittances are sent by the Bangladeshi migrant workers abroad (about 0.55 million), especially in the Middle East, the USA, the UK and other European and Asian countries. It has ensured stability in the balance of payment, which, in turn, has helped Bangladesh in maintaining healthy forex reserves.

Also Read:Bangladesh, Nepal ahead of India as growth in South Asia slows down: World Bank