An overall slowdown in key sectors like automobiles, consumer durables and decline in spending on infrastructure has impacted prospects of the Indian steel industry.

India's domestic steel production declined for the first time in 7 months and the steepest in almost four years as steelmakers produced about 9.09 million tonnes of steel last month that was lower by 3.4 percent over October last year, figures released by worldsteel.org revealed.

The last time steel production had fallen in a month was in March 2019 when the decline was 1 percent. Production had declined at a sharper clip in a month back in February 2016 at 3.6 percent.

October's decline comes after a sharp fall in the growth rate in September when production grew by just 1.6 percent, which was a five month low. Only in August, growth had hit a 4 year high of 6 percent.

An overall slowdown in key sectors like automobiles, consumer durables and decline in spending on infrastructure has impacted prospects of the Indian steel industry, which was at one point in time the fastest growing steel producer in the world. Production of automobiles in the first seven months of this fiscal so far has been lower by over 15 percent compared to last year. Growth in the construction sector also deteriorated to a seven-quarter low of 5.7 percent in Q1 FY20 from 9.6 percent in Q1 FY19. 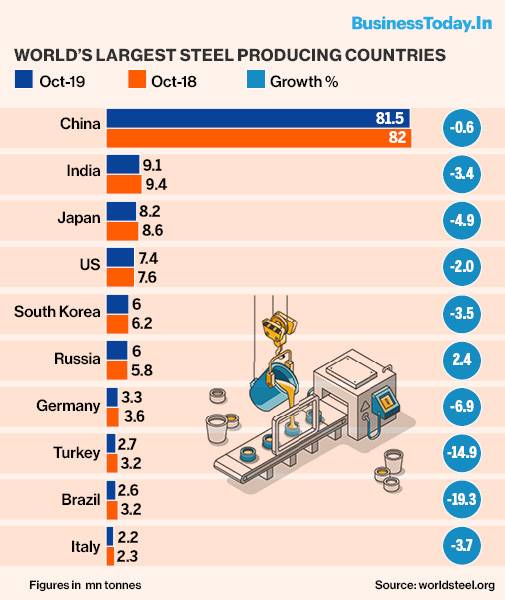 The production trend only follows the trend in consumption which is still growing but has declined sharply since the start of the fiscal. In April, consumption was growing at a healthy 6.4 percent which came down to 1.7 percent by August and just 0.2 percent in September. In the first seven months of this fiscal, the overall figure for steel consumption growth is 3.9 percent in sharp contrast to 7.5 percent of financial year 2018-19 and 7.9 percent in 2017-18.

As a result, steel prices have also fallen in the domestic market to a near three year low of Rs 34,250 per tonne of hot rolled coil in the second week of October below the threshold level of Rs 34,719 per tonne that invites anti dumping duty on imports. Prices have now fallen over 18 percent in this fiscal alone.

All the bad news has started to impact expansion plans of companies as well. Tata Steel and JSW Steel, the top two steel companies in India have both reduced capex for this fiscal. Tata had given a guidance of spending Rs 11,000 crore for this fiscal at the start of the year. It has now pared it down to Rs 8,000 crore. JSW has also deferred a capex of Rs 4,700 crore to the next financial year. It is now spending Rs 11,000 crore this fiscal against the earlier target of Rs 15,708 crore and will also produce about 3 percent less steel this fiscal than earlier anticipated.

"These numbers may see more reduction in the coming quarters," said Koushik Chatterjee, Group CFO, Tata Steel. "There is no money in rural markets and this time around there are no green shoots visible either."

The moderation in demand is not surprising. Steel consumption largely follows the country's GDP trendline which has come down sharply in the last few quarters. India's GDP growth in the first quarter of this fiscal slid to an over 6 year low of 5 percent. It is expected to slide even further in the second quarter of the fiscal. The index of industrial production (IIP) that monitors factory output across sectors in the industry also contracted for the third straight month in September by 4.3 percent, the lowest in 8 years.

All eyes are now on the Q2 GDP numbers that is expected to be released this Friday.