Chinese government-run newspapers used the events to step up its war of words against the United States, with bilateral relations already at a low ebb amid tensions over trade, human rights and the COVID-19 pandemic 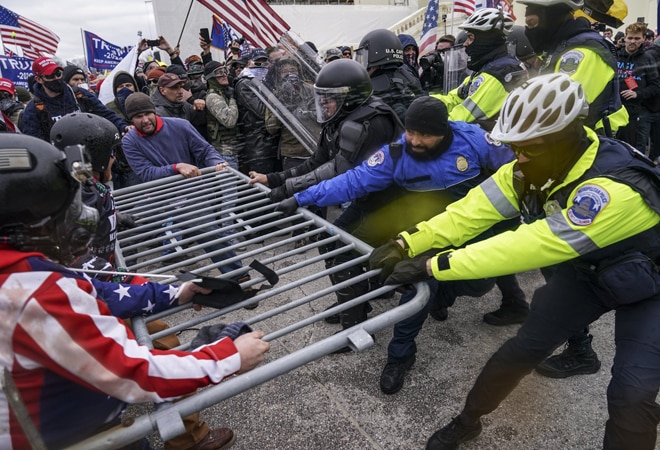 US Capitol violence: Hundreds of supporters of President Trump besieged the Capitol on Wednesday

The storming of the US Capitol by supporters of President Donald Trump reflects a failure of leadership as well as the deep divide running through American society, editorials in China's state media said on Friday. Hundreds of supporters of President Trump besieged the Capitol on Wednesday in what House of Representatives Speaker Nancy Pelosi described as "an armed insurrection against America".

Chinese government-run newspapers used the events to step up its war of words against the United States, with bilateral relations already at a low ebb amid tensions over trade, human rights and the COVID-19 pandemic. The Global Times, a tabloid owned by the People's Daily, the ruling Communist Party newspaper, described the riots as a sign of "internal collapse" in the US political system that could not easily be reversed.

"The unprecedented mob in the Capitol, a symbol of the US system, is the result of the US society's severe division and the country's failure to control such division," it said. "As time goes by and with abuses of resources by generations of politicians, the US political system has degraded," the paper added.

It also lashed out at what it described as "double standards" among US politicians, taking aim at Pelosi's description of the Hong Kong protests in 2019 as "a beautiful sight to behold". "In Hong Kong, violent actions are described as a 'beautiful sight,' in the US, people involved in this chaos are called 'mobs'," the Global Times said.

Pelosi's comments have been widely mocked on China's Twitter-like Weibo service, with the Communist Party Youth League also using the words "beautiful sight" to describe the unrest in Washington. Other netizens described the riots as "karma", and one joked that this was the first attempted coup in the Americas that happened "without the involvement of U.S. embassies", according to the Global Times.

State broadcaster CCTV used the crisis to lambast the US political system, saying "the figleaf of so-called American democracy has been torn clean off". "The United States, which has always promoted democracy and human rights, is now the country of riots, conflicts and curfews," it said.

The official China Daily newspaper said the "narrow nationalism" of President Trump had taken a toll on the United States. "The violence and chaos that have erupted in the US over the past year show what happens when a country's leaders lose touch with reality," it added.

Also read: 'US invades US': Twitter users react to reports of violence at US Capitol