News
LATEST
Economy Politics
CAA & NRC IV: NPR has no independent existence; it exists only in the NRIC context

Unlike the National Register of Indian Citizens (NRIC), Population Register (PR) or National Population Register (NPR) does not exist in Citizenship Act of 1955; it exists in 2003 Rules for preparing NRIC alone and hence, it is misleading to claim that the two are not linked or that NPR has an independent standing of its own in law - it doesn't

The NPR which is to be updated from April to September 2020 in all the states and union territories except for Assam exists in the Citizenship Rules, 2003 for preparing NRIC

A fresh debate has been sparked off over the link between the National Population Register (NPR) for which the Union Cabinet approved Rs 3,941 crore on Tuesday and the National Register of Indian Citizens (NRIC) which would require everyone to prove her or his citizenship. The Central government has asserted that the NPR is not linked to the NRIC in any way.

But this assertion is not borne out of the relevant law or rules that govern the NPR or the NRIC.

1. NPR-2020 notified under NRIC provision for NRIC, nothing else

The gazette notification of July 31, 2019, announcing the date for preparing Population Register, excluding Assam (NPR) - reproduced below - was issued under "sub-rule (4) of rule 3 of the Citizenship (Registration of Citizens and Issue of National Identity Cards) Rules, 2003"  (2003 Rules).

Rule 3 is about "National Register of Indian Citizens" (NRIC) - reproduced along with the gazette notification. Its sub-rule (4) merely empowers the Central Government to "decide a date" by which it would be done.

Thus the purpose of the gazette notification is clear: It is for preparing the NRIC. 2. Process for NPR same as NRIC

The process for the NPR-2020 is a replica of that for the NRIC.

The gazette notification says the NPR would be through house-to-house enumeration for collecting information relating to all persons who are usually residing within the jurisdiction of a local registrar.

The same method and same authority have been mentioned for the NRIC in the 2003 Rules. 3. Organic link between NPR & NRIC; the first leads to the second

The 2003 Rules say the NRIC "shall contain details of person after due verification made from the Population Register" (NPR) - reproduced below. The link is obvious. They are organically linked.

Prof Faizan Mustafa, Vice-Chancellor of Hyderabad's NALSAR University of Law, says: "NPR and NRIC are technically different but, in effect, very closely connected with each other because NRIC will be a sub-set of NPR."

4. NPR-2020 is for deciding citizenship; seeks birth certificates of parents

The questionnaire circulated to the district magistrates (DMs) and additional district magistrates (ADMS) during their training for the NPR-2020 - accessed by Business Today - seeks "Place of birth of Father & Mother if within India, write the name of the state and district if outside India. Write the country and (left blank) for district".

PDT Achary, former Secretary-General of the Lok Sabha (2005-10), says this information can only serve the purpose of determining citizenship. The purpose of the NPR-2020 is distinct from the Census-2021. That is why the Union Cabinet allocated separate sums last Tuesday.

6. Population Register or NPR not in Citizenship Act of 1955

"Population Register" (NPR) does not figure in the parent law - the Citizenship Act of 1955. It exists only in the 2003 Rules. Thus, it has a doubtful legal existence, according to Achary.

He also says: "Without a provision in the parent law (for Population Register of NPR), it can't be provided for in the rules."

Prof Mustafa agrees with the view. He says: "The sub-ordinate legislation (rules) can't go against the parent law. The parent law rather has a positive provision (Section 13) under which the government may issue a certificate in case of doubt about someone's citizenship."

He also says: "NPR should have ideally come under the Census Act of 1948, rather than rules under the Citizenship Act of 1955 because population is connected with the Census."

7. NPR to mark out "doubtful citizenship", which has doubtful legal status

Similar to "Population Register" (NPR), the concept of "doubtful citizenship" to which Prof Mustafa drew attention, does not exist in the parent law - the Citizenship Act of 1955. It only exists in the 2003 Rules.

Achary questions legal validity of this ("doubtful citizenship" provision) too, on similar grounds.

Worse, "doubtful citizenship" has not been defined, nor how to go about it is spelt out in the rules. The local officials have been empowered to do so on their own, putting life and liberty of millions of people in danger. 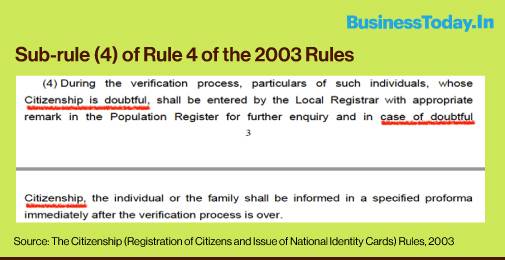 The NRIC was put in the Citizenship Act of 1955 through the CAA of 2003. A simple reading of the CAA of 2003 - reproduced below - makes it clear that the NRIC is meant for registering citizens to issue "national identity cards".

In fact, the title of the 2003 Rules for implementing the NRIC reads: "The Citizenship (Registration of Citizens and Issue of National Identity Cards) Rules, 2003". This should remove all doubts.

To sum it up then, four conclusions can be drawn: (a) NPR-2020 does not exist in the parent law - Citizenship Act of 1955 - but only in the 2003 Rules, raising doubts about its legal validity (b) NPR has no independent existence except for preparing the NRIC and (c) NPR-2020 has been notified under the provision for the NRIC and hence (d) delinking NPR and NRIC is misleading and wrong.

The fact that the NPR was first prepared in 2010 and then updated in 2015 - but stopped short of NRIC on both occasions - does not invalidate nor contradict any of the above conclusions.