Electricity generation from conventional power plants, which include thermal, hydel and nuclear, grew 5.4% on a month-on-month (m-o-m) basis in December 2019

Breaking the six-month spell, electricity generation from conventional power plants, which include thermal, hydel and nuclear, grew 5.4 per cent on a month-on-month (m-o-m) basis in December 2019. Power plants generated a total of 98.8 billion units of electricity as compared to 93.7 billion units generated a month ago. Power demand has been shrinking each month since June last year falling substantially (m-o-m) around 6 per cent and 5.5 per cent in the previous two months. It fell at an average rate of 2.6 per cent in the remaining four months. The respite came from thermal electricity generation which grew 8.3 per cent during the month. Electricity generation from thermal has been growing, m-o-m, albeit lower, since October 2019 by 0.2 per cent and 0.5 per cent in November. Generation from other two conventional power plants, hydel and nuclear is still down, but lower compared to November, it declined 11.4 per cent and 6.3 per cent, respectively. 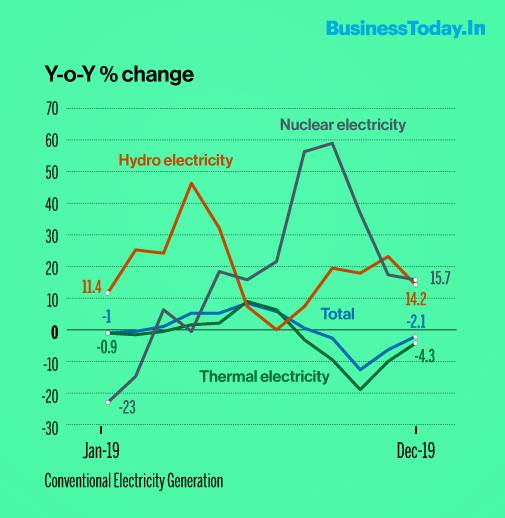 Also read: Wall leakages, cutlery, plants and more; all that a home insurance may cover