This swanky semi-high speed 16-coach train is set to replace the existing Shatabdi Express, running since 1988, for inter-city travel, and will cut the journey time by 15 per cent.

In a big boost to Prime Minister Narendra Modi's Make in India campaign, Indian Railways finally rolled out the new Train 18 on Monday. Railway Board Chairman Ashwani Lohani flagged off the train at the Integral Coach Factory (ICF) in Chennai. This swanky semi-high speed 16-coach train is set to replace the existing Shatabdi Express, which is running since 1988, for inter-city travel. The train will also cut the journey time by 15 per cent as compared to the 30-year-old Shatabdi Express. Loaded with several state-of-the-art features, the Train 18 will run at a maximum speed of 160 kmph. The train has 16 coaches -- two of which are executive-class.

Priced at over Rs 100 crore per rake, this hi-tech train will give a major boost to the Indian Railways' system and will put it on par with the international railway systems. Each coach of Train 18 is expected to cost around Rs 6 crore, which is 40 per cent less than the cost of such trains globally.

Notably, more than 80 per cent of Train 18 components have been manufactured in India. The train was designed by the ICF with the help of consultants without any clause of technology transfer.

The train was rolled out after the Research Design and Standards Organisation (RDSO), the technical adviser to the Indian Railways, gave its nod. Train 18 is propelled through electric traction, similar to metro and local trains, and thus the need for a traditional engine will be dispensed. IFC will manufacture six trains in total, two of which will house sleeper coaches, and the project is expected to be completed by 2020.

So what makes Train 18 so special? Here's a look at some of its premium features. 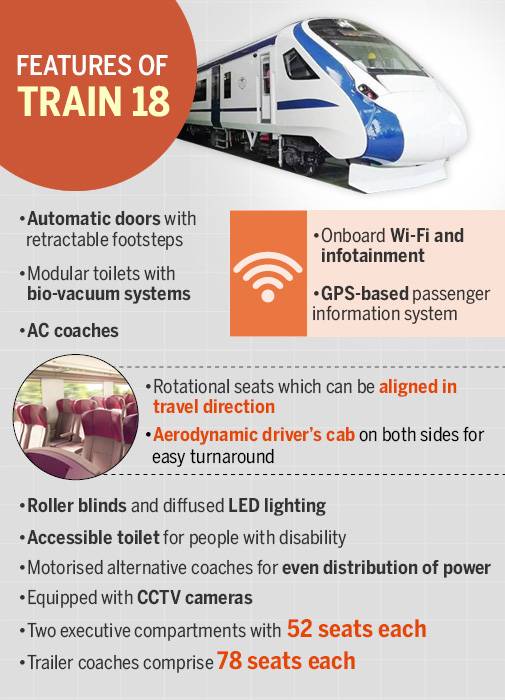 Besides Train 18, the Railways is also working on more advanced Train 20, an aluminium-bodied sleeper class train, which is set to replace the Rajdhani Express trains by 2020. While Train 18 will have a stainless steel body, Train 20 will be made with aluminium.

The government wants to replace old trains with new hi-tech trains. It has already asked all zonal railway general managers to work on increasing the speed of long-distance passenger trains by 5 kmph every year, thus reaching the target of a 25kmph increase in speed by 2022.