Taxing the untaxed I: Why govt should tax agricultural income

The exemption to agricultural incomes - the true extent of which is not known in the absence of official data - is a black hole into which huge amount of incomes of non-agriculturists disappear every year. This has been officially acknowledged several times in the past five decades. The finance ministry officials, lawmakers and even academics working in the area of taxation and agriculture have known it but little has been done to correct the situation and thereby hangs a tale.

First, what already is in public domain and widely known.

Exemption as a tool of tax evasion and money laundering

The last official report to highlight how exemption to agricultural income is being misused was the third Tax Administration Reform Commission (TARC) report of 2014. It was very unequivocal about the malaise: the exemption is being used by non-agriculturists as a "conduit to avoid tax and for laundering funds". The relevant part is reproduced to remove any doubt about the authenticity of this assertion.

In 2002, the Kelkar Committee (Task Force on Direct Tax) had said the same thing: the exemption to agriculture income "distorts both horizontal and vertical equity" and "encourages laundering of non-agricultural income as agricultural income, i.e., it has become a conduit for tax evasion". The relevant part is reproduced below.

Economist Prof Arun Kumar, who studies black money in the Indian economy, says the issue dates back to 1970s. He says two committees in the 1970s - the Raj Committee and the Wanchoo Committee - raised the issue and pointed out that "diversion of income to agriculture was being used to evade tax" by non-agriculturists.

The Comptroller and Auditor General of India (CAG) took note of it and audited the processes the income tax department (ITD) follows for allowing such exemptions. This report (CAG report no. 9 of 2019) was tabled in the Parliament in July 2019. 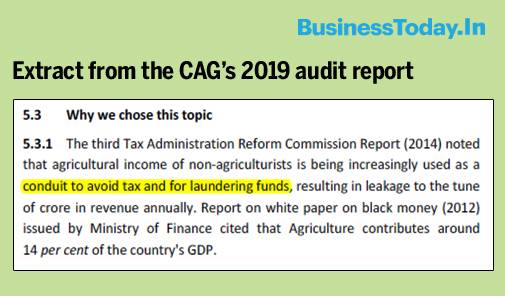 The CAG reviewed 6,778 cases out of 22,195 scrutiny assessments (not the total number of exemption cases) the ITD had carried out between FY15 and FY17 of those who had claimed more than Rs 5 lakh in agricultural income. Thus, 6,778 cases were a sub-set of the ITD's sample for scrutiny.

In those 6,788 cases, the agricultural income of Rs 3,656.25 crore was claimed, of which Rs 2,544.21 crore was allowed. Of the total claims, companies accounted for the most (57% of claims) - as would be clear from the extract reproduced below. The CAG observed that it was "therefore not clear as to how AOs (assessment officers) were ensuring that the exemption was provided only to eligible assessees and that the claims of assessees were genuine".

For illustration, here is a case. In Tamil Nadu, a company sold agricultural lands for a sale consideration of Rs 8.74 crore - of which Rs 5.32 crore was shown in the registered sale deeds and a premium of Rs 3.42 crore which was not disclosed in the sale deed and thereby no stamp duty was paid for it.

The company was allowed an exemption of Rs 7.34 crore towards "profits earned on transfer of agricultural lands". The CAG said the premium (Rs 3.42 crore) had to be treated as 'income from other sources'. Not doing that resulted in inadmissible allowance of exemption of Rs 3.42 crore and caused a revenue loss of Rs 1.11 crore. "The ITD agreed to look into the matter (October 2018)", commented the CAG.

Now, what is agricultural income and if it is exempted from income tax why does it need to be declared?

What does agricultural income and exemptions mean?

These are exempt from income tax.

Further, the CAG report said exemption under the Income Tax Act of 1961 may also be claimed on income from the sale of agriculture land, income earned as compensation received from government for acquiring the agriculture land etc." - as reproduced below.

Why agricultural income needs to be disclosed?

Also Read: Budget 2020: Rural per capita income may rise up to 5%, but FMCG CEOs sceptical

In the intervening period, an interesting twist came.

A retired income tax officer, Vijay Sharma, went to Patna High Court in 2016 after obtaining an RTI reply (in 2015) from the Directorate of Income Tax (Systems) on disclosures of agricultural income between AY (assessment year) 2004-05 and AY 2013-14 - as reproduced below. 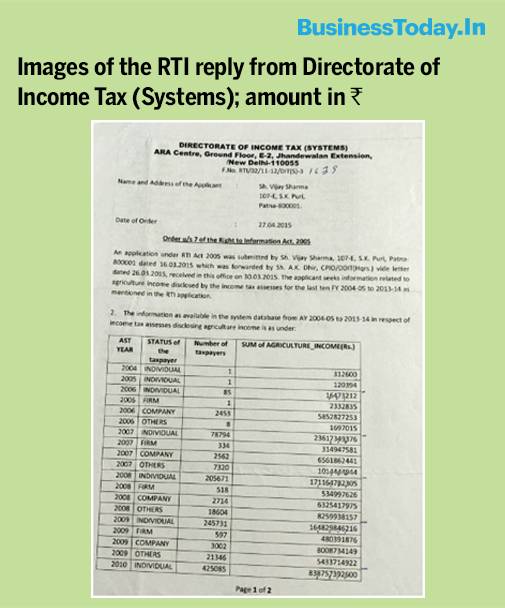 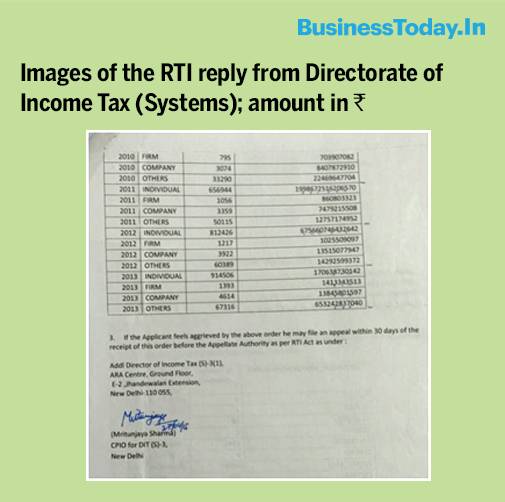 There have been newspaper reports from time to time about how Indians had withdrawn their deposits in foreign banks following the Indian government's attempt to bring back the black money stashed abroad and hardening of attitude towards tax havens and secret bank accounts by governments all over the world post-2008 financial meltdown.

The court dismissed Sharma's petition the same year (in 2016) on the grounds of (a) abnormally high values (particularly for 2011, 2012) of agricultural income appearing in the RTI reply "could be due to inadvertent data entry error" as the tax authorities had claimed in their counter affidavit (b) if found doubtful in nature, the tax authorities "will take proper steps" and (c) such assesses being spread all over India, it is better "left to the individual action of the Income Tax Officers".

What the Directorate of Income Tax (Systems) had disclosed in the TRI reply is tabulated below. The amount is in Rs crore (in the RTI reply it is in Rs). 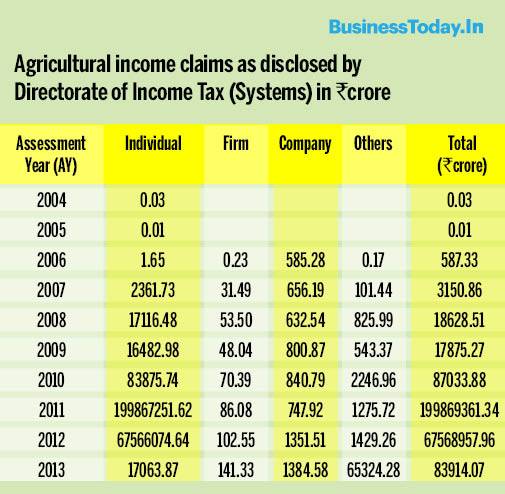 The court order had mentioned that the tax authorities had identified 2,746 cases of agricultural income of above Rs 1 crore between AY 2007-08 AY 2015-16 for verification.

It sought status report from 136 Principal Commissioner of Income Tax (PCsIT) but received responses only from 26 PCsIT. In 327 cases that came before it, data entry errors were noticed in 36. Even in these cases, the CAG found that in case of 26 the review was not complete and in 12 errors identified but not corrected. It refused to comment conclusively on the subject due to non-disclosure of information by the tax authorities.

Extent of the exemption 'black hole' not known

While all these details give a picture of what is going on, none of it provides a clear estimate of the size of agricultural incomes being disclosed to income tax authorities for claiming exemptions.

The Kelkar Committee and the third TARC reports were very scathing in their observations but did not provide any evidence. This is rather strange given the fact that these were the finance ministry projects and had the power to seek all relevant data.

There is no doubt that the tax authorities have all the relevant data - they are the repository of such data as is clear from the RTI reply and CAG audit - but these are not made public or analysed to estimate the extent of tax evasion and money laundering.

Even if the information is provided - as was the case in the RTI reply to their own retired official in 2015 - the tax authorities promptly discredited their own data through a counter-affidavit and stopped responding to his subsequent RTI queries. This attitude raises questions about the real intentions of the tax authorities and governments.

Revenue loss due to exemption on agricultural income

How much tax revenue is really lost due to the exemption to agricultural income?

At least one assessment exists: a study carried out by the National Institute of Public Finance and Policy (NIPFP) - finance ministry's research body - in 2012, which was published in the Economic and Political Weekly. 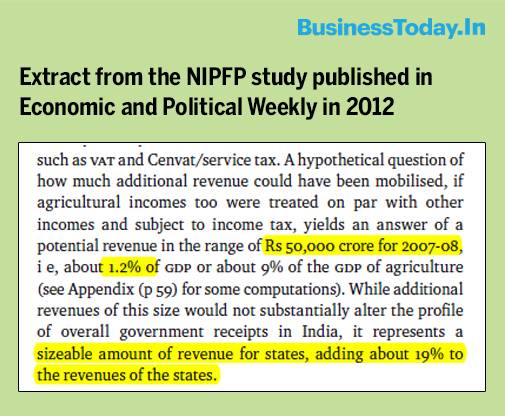 Hence this is different from what the Kelkar Committee and TARC reports were talking about.

The study had also pointed at the growing presence of corporate sector in agriculture and that more than 50 companies reported income of over Rs 100 crore from agriculture in FY10 - totalling Rs 31,313 crore.

Here is a back-of-the-envelope calculation taking the NIPFP's 2012 study as the basis.

At 1.2% of the GDP in FY20, the loss of revenue from agricultural income would amount to Rs 2.45 lakh crore - taking the GDP size for FY20 to Rs 20,442,233 crore at current prices, as per the NSO's first advance estimate released last month.

There are other reasons why this matters.

The Kelkar Committee listed two reasons for taxing agriculture, to which the third TARC report added one more (reason).

Third, a narrow tax base leads to a higher tax rate structure and burdens other tax payers.

Can agricultural income be taxed and how?

This is not as simple as it may sound. It is a politically sensitive issue with few takers even though the reasons for the same may challenge reason.

Nevertheless, the third TARC report of 2014 advocated taxing agricultural income. In one single paragraph, it laid out how this could be done and what are the challenges. For those who may be interested, this paragraph is reproduced below.