Chinese investments in the country's infrastructure sector have come only sparingly but rising tension on the border that claimed lives of 20 Indian soldiers on Monday clouds the prospects of even those projects in the running.

Senior bureaucrats said that the recent border clash has vindicated Home Ministry's security-related concerns involving Chinese companies. The Chinese firms have been trying to take a slice of India's infrastructure pie but intense scrutiny of their proposals has kept them away.

Chinese firms indeed have good bandwidth when it comes to sophisticated infrastructure projects like tunnelling, industrial infrastructure metro and railways, but their reliability has been a major concern.

Not surprisingly, the state-run Chinese railways were keen to take part in India's Rs 1.08 lakh crore high-speed bullet train project between Mumbai and Ahmedabad but the signature project is being executed with the help of Japan.

In what mirrors the relationship between the two nations, MoUs worth $22 billion were signed during Prime Minister Narendra Modi's visit to Shanghai in 2015 but only a fraction of it actually fructified on the ground.

With boycott China chorus growing louder by the day, there is mounting pressure on the government to boot away Chinese investments. Amid heightened tension between the two countries, Chinese firm Shanghai Tunnel Engineering Co Ltd (STEC) has emerged as the lowest bidder for construction of an underground stretch of the Delhi-Meerut rapid transit project. But there is demand from several quarters to not award the contract to the Chinese firm and instead it should be awarded to an Indian company. 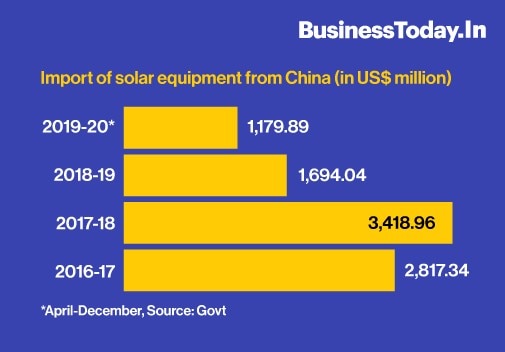 While China has missed on infrastructure investment opportunities in India, it has enjoyed a fairly advantageous position in trade. So much so that some of the sectors like solar power and pharmaceutical sectors are heavily dependent on China for inputs.

Industry experts said that souring relations with China could impact the country's solar sector as most key items are imported from there.

"In solar, all inverters and modules come from China. So, with the ongoing issue there is going to be a more strong pitch for Atma Nirbhar Bharat. As of today, 80-85 per cent solar modules imports and inverters are from China. So, in the short term it will impact," said Sunil Jain, Chief Executive Officer (CEO), Hero Future Energies.

Jain said that even the manufacturing of modules is dependent on import of components from China.

India may look at other countries such as Thailand, Malaysia and Vietnam as a substitute for China but the problem is that these countries do not have the required scale. Furthermore, they are also dependent on China for several key solar power inputs.

With government focus on local manufacturing, India can be self-reliant in solar items but it is expected to take about 12-18 months and during this period local solar power firms would have to grapple with supply challenges.

While there is an anti-China sentiment and the general public wants retaliation for 20 soldiers killed in the bloody violence, a section of investors is worried too.

"Investor community is really concerned about this. Because this will mean that we will lose a lot of money which could have otherwise come especially in tech, logistics, and in the start-up business where Chinese guys are fairly comfortable in taking position," said a Mumbai-based investor.

The Chinese investors such as Alibaba, Fosun Group, Tencent and TR Capital have, however, aggressively infused cash into a clutch of Indian start-ups and unicorns. As per industry estimates, Chinese investors have put in more than $5.5 billion in the new-age firms.

The strained relations between India and China are set to have an impact on trade and investment. The exporters and importers are wary of the recent developments. The sequence of events in the last few months has added to the uncertainty.

Industry veterans said that India is an aggrieved party and there would be definitely impact on trade and investment between the two countries if India takes retaliatory action. They at the same time hope that the inter-dependence between the two nations could keep situations from turning ugly as any further confrontation could result in disruptions in supply chains.

"The border tensions have added to the uncertainty of the trade between the two countries and both exporters and importers are concerned with these developments," said Ajay Sahai, Director General, Federation of Indian Export Organisations (FIEO).