A garnishee order is an order against a third party to recover money to settle a debt or dues. Garnishee order prevents these entities from alienating assets

RSSB chief Gurinder Singh Dhillon, wife Shabnam Dhillon, sons Gurkirat and Gurpreet and daughter-in-law Nayan Tara Dhillon are among the 56 entities from whom Delhi HC has ordered recovery of monies Singh brothers-Malvinder & Shivinder-owe to Daiichi. Money will also be recovered from former Religare chief Sunil Godhwani and brother Sanjay Godhwani, according to the Delhi HC order.

BusinessToday.In had reported on March 12 that Singh brothers can only pay the $500 million order against them to compensate Daiichi, provided the money owed to them by RSSB chief Gurinder Singh Dhillon and his family is recovered. In his submission, Malvinder has maintained that he can pay the arbitration order provided he can recover the money owed to him.

Daiichi has enfored an arbitration order in Singapore that ordered the brothers to pay Daiichi $500 million towards alleged non-disclosure of crucial information during the sale of Ranbaxy Laboratories to Daiichi in 2008.

With this order, the Delhi HC has expanded the scope of people from whom the money owed by Singh brothers to Daiichi can be recovered to honour the arbitration award.

Besides the Dhillon family, the Delhi HC is issuing 'garnishee orders' against several Dhillon and RSSB associates' companies, including Prius Real Estate, Addon Realty, Payne Realtors SGGD Projects, Luminous Holding. A garnishee order is an order against a third party to recover money to settle a debt or dues.

Garnishee order prevents these entities from alienating any assets. The dues will now be paid to Delhi HC instead of Singh brothers and their entities to whom it is owed. 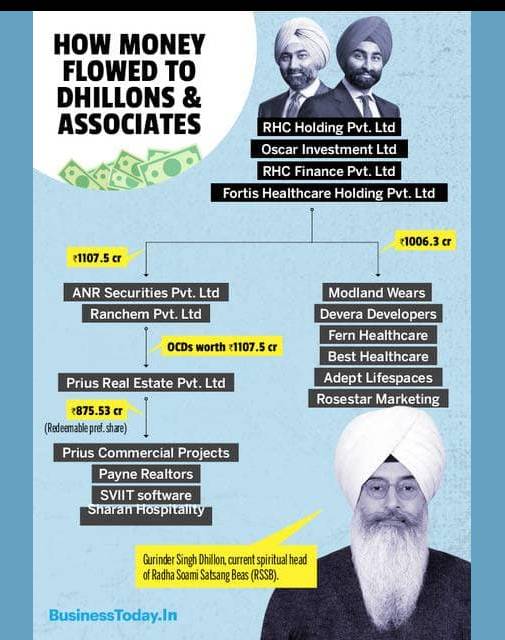 Thereafter, this money was transferred to Prius Real Estate Private Limited controlled by Dhillon family associates and RSSB functionaries through optionally convertible debentures (OCD). The money invested in other Prius group entities called Prius Commercial, Payne Realtors, SVIIT Software and Sharan Hospitality whose preference shares worth Rs 875.53 crore were subscribed to by Prius Real Estate. Both the OCDs and preference shares were to be redeemed between August-November, 2018 at a hefty premium.

Delhi HC had concluded the hearing on May 28. The written order was issued on June 10.