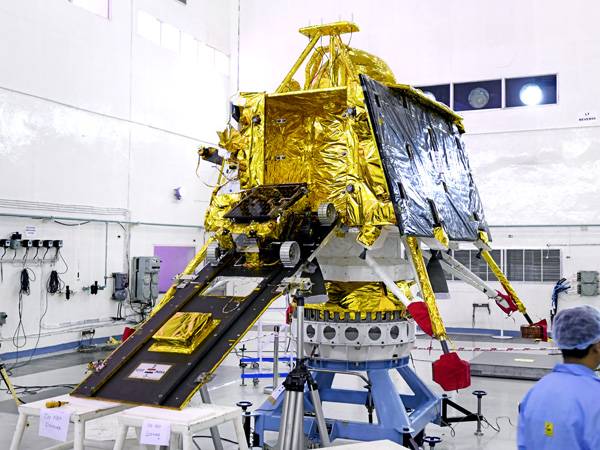 The ISRO's ground station lost contact with lander Vikram as it was merely 2.1 km above the lunar surface, just as it was about to touchdown on to the designated landing site. However, ISRO said that it is not sure whether the lander crash landed or not. The space agency added that it is presently analysing the data available with it to ascertain the reason behind the snag and the findings will be made public on a later date.

"Vikram lander descent was as planned and normal performance was observed up to an altitude of 2.1 km. Subsequently, communication from lander to ground station was lost. The data is being analysed," ISRO chief K Sivan announced from the ISRO mission control to a crowd of distraught scientists.

Prime Minister Narendra Modi, who was present at the ISRO Telemetry, Tracking and Command Network (ISTRAC) in Bengaluru to witness the landing Chandrayaan 2, boosted the morale of the ISRO scientists.

"Life is full of ups and downs. This is no small achievement. The entire nation is proud of you. Hope for the best," PM Modi said.

Notably, even though communication with lander Vikram and rover Pragyan is lost, the Orbiter at a 100km orbit remains functional with eight working science payloads.

Follow all the updates from Chandrayaan 2's landing LIVE on BusinessToday.In:

4:05 am: PM Narendra Modi to address the nation from ISRO Control Centre at 8:00 am today.

2:48 am: "The communication isn't lost. Every single person in India can feel the heartbeat of #chandrayaan2 We can hear it whisper to us that 'If at first you don't succeed, try, try again," Mahindra Group Chairman Anand Mahindra says in an encouraging tweet after ISRO lost contact with lander Vikram.

2:42 am: The Orbiter, which remains in the lunar orbit, is still functional. This module of Chandrayaan 2 has the highest number of science payloads in the entire mission at eight instruments and is expected to remain functional for the next two years.

2:41 am: PM Narendra Modi says India is proud of its scientists.

India is proud of our scientists! They’ve given their best and have always made India proud. These are moments to be courageous, and courageous we will be!

2:30 am: "Life is full of ups and downs. This is no small achievement. The entire nation is proud of you. Hope for the best," PM Narendra Modi tells scientists.

2:17 am: "Vikram lander descent was as planned and normal performance was observed up to an altitude of 2.1 km. Subsequently, communication from lander to ground stations was lost. The data is being analysed," ISRO chief K Sivan announces.

2:11 am: Connection re-established with lander Vikram. Data being processed. Findings will be announced shortly.

2:09 am: Anxiety rises at Chandrayaan 2's mission contral as there is no signal from lander Vikram.

2:05 am: There seems to be a delay in lander Vikram's touchdown on to the lunar surface. ISRO centre is presently awaiting a signal from the lander that it has landed on the Moon.

1:38 am: Lander Vikram begins its final descent. The first phase of landing has been started to reduce the velocity of the lander.

1:34 am: Five more minutes before lander Vikram begins its powered descent to the Moon's South Pole. This final descent will be completed in four phases.

Karnataka: PM Modi at the #ISRO Centre in Bengaluru to watch the soft landing of Vikram lander on South Pole region of moon. 60 students from across the country, who were selected through ISRO's 'Space Quiz' competition will watch the landing along with PM. #Chandrayaan2pic.twitter.com/e166MErF9X

1:21 am: Visuals from ISRO's centre in Bengaluru where the final descent of lander Vikram is being closely watched by scientists.

Bengaluru: Scientists gear up for the soft landing of Vikram lander on the South Pole region of the moon. 60 students from across the country, who were selected through the ISRO's 'Space Quiz' competition to watch the landing along with PM Modi, also present at the ISRO centre. pic.twitter.com/0UXdQwdAqm

1:18 am: Lander Vikram will begin is powered descent to the lunar surface in 20 minutes. Once the descent process begins, the lander will take around 15 minutes to touch the Moon's surface.

1:14 am: The locations for landing site for soft landing on Lunar South Pole has already been sent to the onboard computer of lander Vikram. ISRO also has an alternative landing site prepared if the lander fails to reach the original landing site.

1:07 am: Renowned astrophysicist Neil deGrasse Tyson congratulates India as lander Vikram of Chandrayaan 2 is minutes from making a soft landing at the South Pole of Moon.

Dear India, Welcome to the community of Moon-faring nations — just hours away from the arrival of your Vikram lander & Pragyan rover near the Lunar South Pole.

12:10 am: On Friday, PM Narendra Modi urged all to watch the Chandrayaan 2's landing on to the Lunar South Pole and share their pictures on social media. He even promised to re-tweet some of them.

I urge you all to watch the special moments of Chandrayaan - 2 descending on to the Lunar South Pole! Do share your photos on social media. I will re-tweet some of them too.

12:00 am: ISRO will telecast Chandrayaan 2's landing live on its website, isro.gov.in from its control room at the Satellite Control Centre in Bengaluru. The landing can also be viewed live on ISRO's official YouTube channel from 1:10 am. It will also be broadcasted live on DD National.

11:30 pm: The lander Vikram and rover Pragyan will conduct in-situ experiments on the Moon's surface for a period of 14 days, which is equivalent to 1 lunar day. Meanwhile, the Orbiter which brought them close enough to the Moon, will continue remote-sensing observations from a 100km orbit.

11:15 pm: Chandrayaan 2 is unique in the sense that it will be first lunar mission to land on the South Pole of the Moon. The data collected by lander Vikram and rover Pragyan will be crucial to understand the origin and evolution of the heavenly body. The will also try to find information about the composition of Moon's surface and atmosphere, as well as further investigate the presence of water on Moon that was detected by Chandrayaan 1.

11:00 pm: Visuals from ISRO Monitoring Centre as Chandrayaan 2 get closer to land on the South Pole of the Moon.

The final descent of #Chandrayaan2 to take place on the Lunar South Pole, tonight. #Visuals from ISRO Monitoring Centre in Bengaluru. pic.twitter.com/dZTcjmkg6G

10:45 pm: Prime Minister Narendra Modi has arrived in Bengaluru. He will watch the landing of Chandrayaan 2 from ISRO control centre in Bengaluru.

Karnataka: Prime Minister Narendra Modi arrives at Bengaluru Airport; received by CM BS Yeddiyurappa. He will reach ISRO centre in Bengaluru tonight ahead of landing of #Chandrayaan2 on the moon. pic.twitter.com/Bc9RngfjPl

10:41 pm: The lander Vikram and rover Pragyan will collect data crucial to understanding the origin and evolution of Moon. Meanwhile, the Orbiter will conduct remote-sensing observations from a 100km orbit.

10:40 pm: The countdown is on. Chandrayaan 2 has begun its final descent to the Moon's South Pole