Haarsh was taken into custody after Bharti's arrest. His questioning, which began on Saturday, November 21, ended in the early hours of Sunday 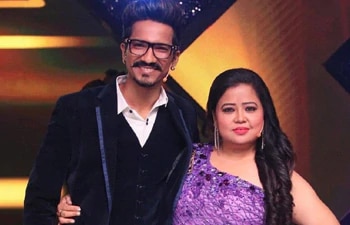 Haarsh was taken into custody after Bharti's arrest. His questioning, which began on Saturday, November 21, ended in the early hours of Sunday.

On Saturday, the NCB team arrested Bharti following the seizure of ganja (cannabis) from her house in suburban Andheri. The agency raided Bharti's residence as part of its probe into alleged drug use in the Hindi film industry.

During the search, NCB officials recovered 86.5 grams of ganja. The agency has also claimed that both Bharti and Haarsh accepted the consumption of ganja. "The quantity of cannabis allegedly seized from Bharti's house is considered as "small quantity" under the Narcotic Drugs and Psychotropic Substances (NDPS) Act , as against "commercial quantity," NCB added.

Haarsh is a screenwriter, producer, and television personality. He has written shows like  Comedy Circus Ke Tansen, Comedy Nights Bachao and Comedy Nights Live. He is currently hosting a dance reality show - India's Best Dancer - with his wife Bharti. Bharti and Haarsh married in 2017.

The NCB has been probing the alleged drug use in Bollywood after the death of actor Sushant Singh Rajput in June on the basis of WhatsApp chats involving drugs.

The central agency had earlier arrested Rajput's girlfriend, actress Rhea Chakraborty, her brother Showik, some employees of the late film star and a few others under various sections of the NDPS Act.

Rhea Chakraborty and several other accused are currently out on bail.