While there have been no formal notification about when, how or if PUBG would be back for the gamers, PUBG Corporation dropped a major hint about its comeback in India

Is PUBG Mobile back in India?
BusinessToday.In

PlayerUnknown's Battlegrounds or PUBG enjoys a fanfare like no other game in India. Its ban seven weeks ago left a gaping void for fans of the popular game. While there have been no formal notification about when, how or if PUBG would be back for the gamers, PUBG Corporation dropped a major hint that indicates that the game might indeed be back in the country.

PUBG Corp took to LinkedIn to post for the role of Corporate Development Division Manager - India, based remotely or in Delhi. For job location details, PUBG Corp said, "TBD (working from home in India or the city where PUBG India will be set up)". When it comes to job description, PUBG Corp stated that the candidate must help in the "setup process (of) PUBG India".

The role would require the candidate to "jointly develop overall M&A and investment strategy for the gaming and related sectors" in the Indian market. The candidate would also have to "monitor pipeline of potential M&A, investment and strategic partnership opportunities" in the gaming sector in India.

"Conducting gaming/entertainment/tech industry research and analysis, company due diligence, building financial models, drafting investment discussion materials and reports, work closely with internal leaders and external advisors" are some of the other key responsibilities. 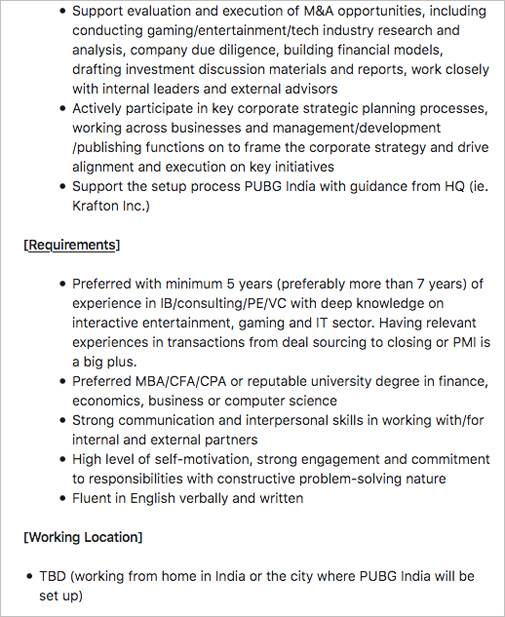 When it comes to eligibility, the role requires minimum 5 years but preferably more than 7 years of experience in IB/consulting/PE/VC along with "deep knowledge" of entertainment and gaming sector.

"Strong communication and interpersonal skills in working with/for internal and external partners; high level of self-motivation, strong engagement and commitment to responsibilities with constructive problem-solving nature; fluent in English verbally and written," are the other requirements.

Speculations are rife that this role would be instrumental in operating PUBG Mobile in India after the company launches its Indian version.

PUBG Mobile was among the 118 Chinese apps banned by the Indian government amid privacy and security concerns. India contributes 24 per cent of the worldwide user of the battle royale game. According to Sensor Tower, PUBG's revenue dropped to $198 million from $221 million after the ban.