Tata Motors is leading the EV space in India with over 70% of the market share and its Nexon EV being the best-selling electric car in the country.

Tata Motors' achievement came on the back of its SUV Nexon which recorded a 95 per cent increase in sales compared to FY21 and sold 124,130 units in FY22. Hyundai’s best-selling SUV in the Indian market, Creta managed to sell 118,092 units, around 6000 units less than Tata Nexon.

However, Tata’s this feat wouldn’t be possible without the Nexon’s electric version, which made a big difference for the company and sold 14,248 units in FY22. This also reveals that the Nexon EV’s sales grew over threefold as it had sold only 4,219 units in FY21. 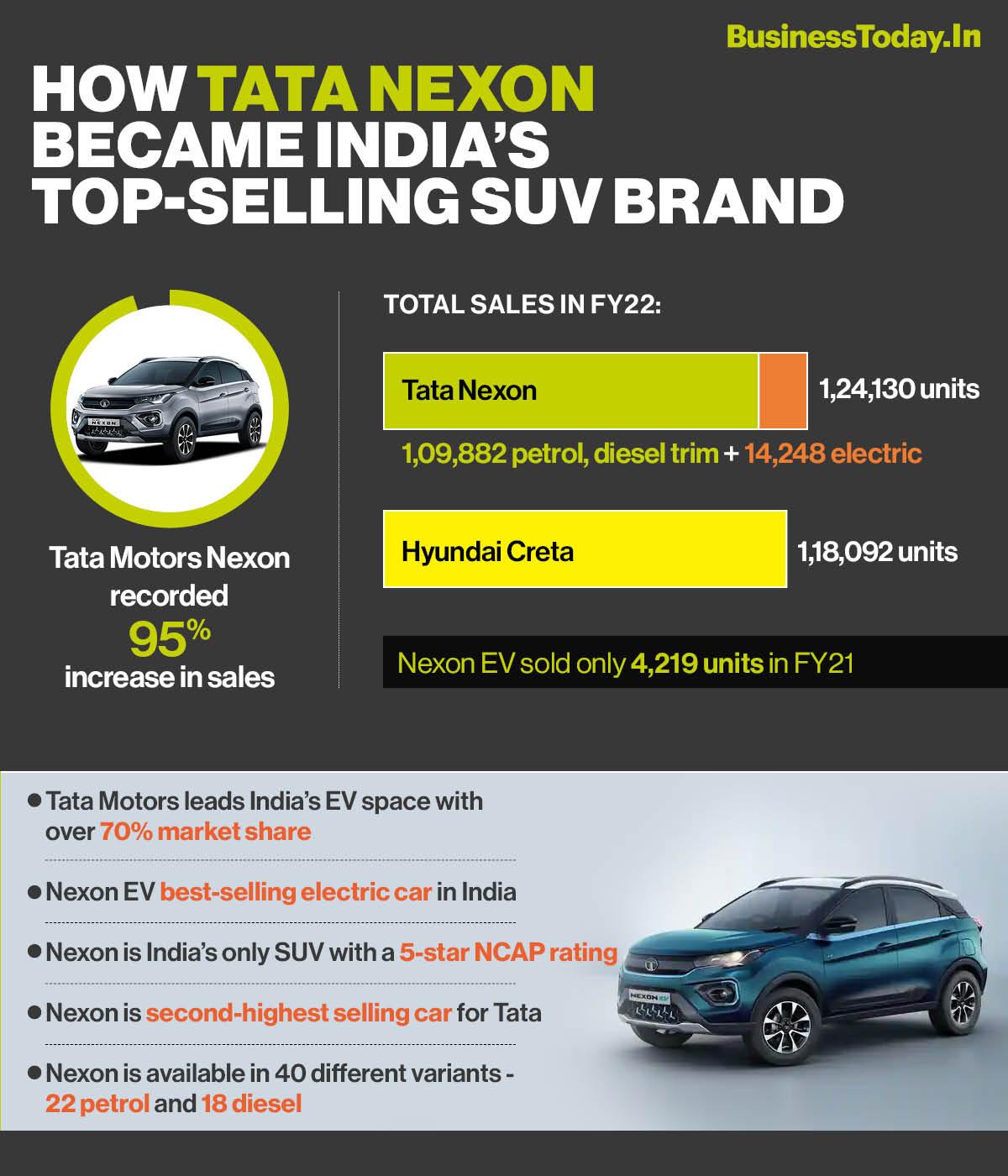 As of now, Tata Motors is also leading the EV space in India with over 70 per cent of the market share and its Nexon EV being the best-selling electric car in the country.

Interestingly, this is also the first time Tata Motors has become the best-selling SUV brand in India. In addition to this, Nexon has also become the second-highest selling car for Tata in its history after its hatchback Indica, which sold 1,35,642 units in FY08.

Launched in 2017, Tata Motors has constantly modernised the Nexon for safety, design, regulations, emissions and segment-defining feature additions. With the introduction of the recently launched Kaziranga Edition, the Nexon is now available in 40 different variants including 22 petrol variants and 18 diesel versions with automatic and manual transmission options.

The Nexon EV, which was launched in early 2020, comes with an IP67-certified 30.2 KWh lithium-ion battery and has 312 kilometres of ARAI certified range. The compact SUV’s electric motor churns out 229 PS and 245 NM of torque and is paired to an automatic transmission system.

Moreover, Nexon is also the only SUV in India with a 5-star NCAP rating. The car’s EV version is priced between Rs 14.79-17.40 lakh (excluding state subsidies).

Tata Motors Nexon EV can be charged from 0 to 80 per cent in 60 minutes using a fast charger and from 20 to 100 per cent in 8 hours using a regular charger. Apart from this, Tata is also offering an 8-year/1.6 lakh km warranty for its EVs.

Tata Motors is also prepped to launch a long-range version of its Nexon EV on Wednesday. The updated version of the SUV is likely to come with a bigger 40 KWh battery pack for more power and a higher range of up to 400 kilometres on a single charge.

In addition to this, Tata Motors had also planned to launch around ten new EVs by 2025 and has showcased two new concept cars — Curvv and Avinya — which are likely to enter production in 2025. Tata has claimed that both these cars will have a range of around 500 kilometres on a single charge.