Cyclone Amphan to make landfall in West Bengal, Odisha on May 20; to wreak large-scale damage

Cyclone Amphan tracking: Cyclone Amphan is likely to make landfall between Digha in West Bengal and Hatia island in Bangladesh, and south of Paradip in Odisha on May 20 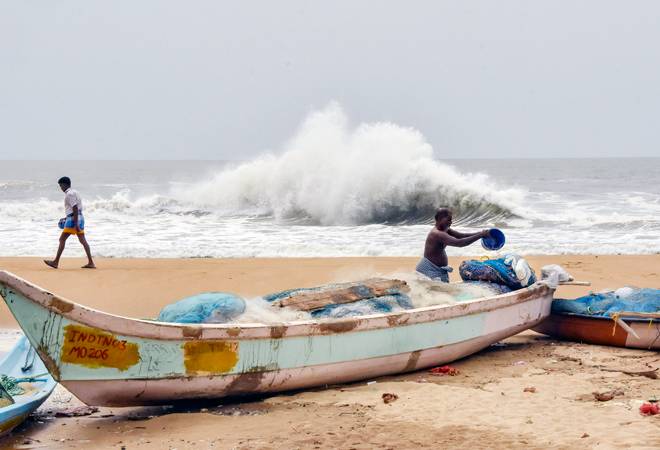 The extremely severe cyclonic storm 'Amphan' is spiraling towards Indian shores. At present, it is moving at a speed of 7 kmph. Cyclone Amphan is likely to make landfall between Digha in West Bengal and Hatia island in Bangladesh, and south of Paradip in Odisha on May 20.

The National Disaster Response Force (NDRF) has deployed 37 teams in the coastal areas of the two states.

Wind speeds along and off the coastal areas of West Bengal will reach 45 to 55 kmph with gusts of 65 kmph from Tuesday afternoon. It will gradually increase to 75 to 85 kmph and 95 kmph from Wednesday morning (May 20) along and off districts of North and South 24 Parganas, East and West Midnapore, Kolkata, Howrah and Hooghly. The cyclone will result in heavy rainfall in many places over the districts of West Bengal.

The Met department has warned of extensive damage in Kolkata, Hooghly, Howrah, South and North 24 Parganas and East Midnapore districts. Met added that rail and road link will get disrupted due to the cyclone. Uprooting of communication and power poles and extensive damage to all types of 'kutcha' houses in Odisha and West Bengal are the other risks.  There is also likelihood of massive harm to standing crops, plantations and orchards, the Met office added.

Meanwhile, on Tuesday, Prime Minister Narendra Modi assured all possible central assistance to the states that will be hit by cyclone Amphan.

PM Modi tweeted saying, "Reviewed the preparedness regarding the situation due to cyclone 'Amphan'. The response measures, as well as evacuation plans, were discussed. I pray for everyone's safety and assure all possible support from the Central Government".

West Bengal Chief Minister Mamata Banerjee said that NDRF and State Disaster Response Force (SDRF) personnel were in a state of readiness to evacuate those who will be hit by the cyclone. Odisha Chief Minister Naveen Patnaik has already set a target of ensuring zero casualties.

Cyclone 'Amphan' is the second super cyclone over the Bay of Bengal after the one that savaged Odisha in 1999, claiming nearly 10,000 lives.

Not compulsory for businesses to pay wages during coronavirus lockdown