Sriram, the owner of sweet-stall named Mysoorpa as "Photon Speed Corona Cure Mysoorpa". He also released an advertisement to direct consumers on the intake of 'Mysoorpa'. Each bite of the sweet must be chewed 13 times inside the mouth, with lips closed, then swallow 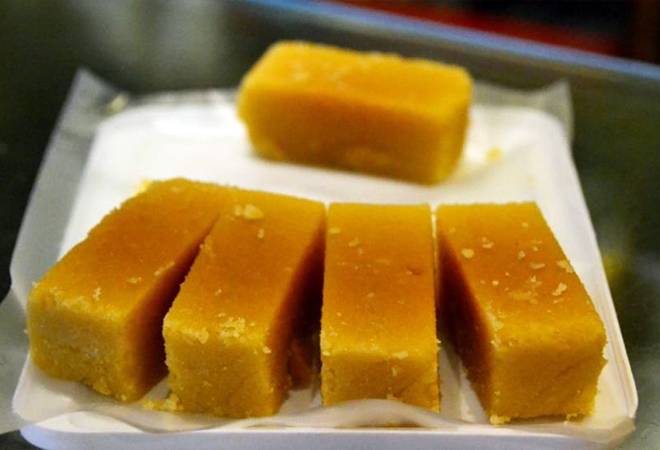 The Food Safety and Standards Authority of India (FSSAI)  has suspended the licence of a sweet-shop owner at Chinniyampalayam area in Coimbatore district after its owner claimed that coronavirus can be cured in just a day by consuming the "herbal Mysoorpa" prepared at his shop.

FSSAI has filed a case against Sriram under Section 53 (the penalty for misleading advertisement) and 61 (punishment for false information) of the Food Safety and Standards Act, 2006, according to a report in the New Indian Express.

FSSAI officer K  Tamil Selvan said they launched an enquiry against the shop owner as he was making false and misleading claims. "When questioned, he was unable to even name the full list of ingredients used in the Mysurpa," Selvan said.

The FSSAI officials also seized 120kg of Mysurpa from the shop, which is estimated to be worth around Rs 1 lakh.

Besides, the officials have collected some samples of the product for laboratory testing.

According to the daily, Sriram, the owner of sweet-stall named Mysurpa as "Photon Speed Corona Cure Mysoorpa". He also released an advertisement to direct consumers on the intake of 'Mysoorpa'. Each bite of the sweet must be chewed 13 times inside the mouth, with lips closed, then swallow. For children, the dose level will be half of the size, the advertisement added. Sriram claimed that the bitter taste of herbs would become sweeter as immunity improves.

Sriram, through the advertisement, advised people to take the dosage of his 'Mysoorpa' for three days-4 pieces in one day. Sriram sold a 50 gramme of Mysurpa for Rs 50, and 1kg was sold at Rs 800, according to the daily. The advertisement further stated that people with no symptoms can also consume the sweet to boost immunity.

Also read: BT Buzz: Did you check your NPS returns yet? Time to review and make adjustments

Coronavirus crisis: Cases in US shoot up by over 60,000 in largest single-day spike