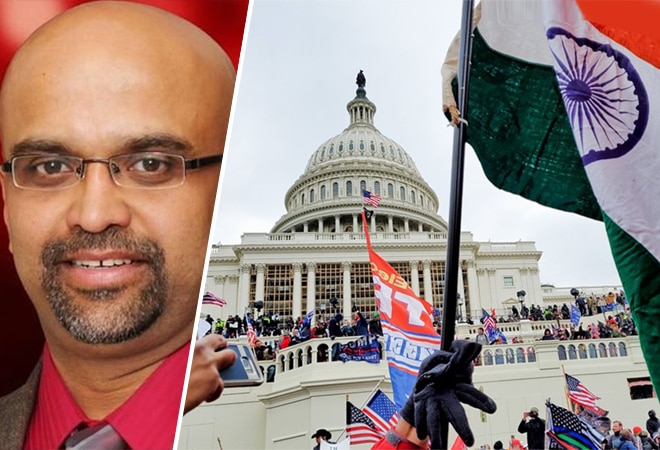 Vicent Xavier has since then stated that his intentions behind waving the Indian flag at the US Capitol protest were to prove that the USA is "not racist as it is portrayed to be" and that the country embraces diversity.

Since Vicent Xavier was identified as the man waving the Indian flag in the viral clip, photos of him with various Indian politicians have surfaced online. This led to a Twitter spat between Congress Member of Parliament (MP) Shashi Tharoor and BJP MP Varun Gandhi. Tharoor criticised Xavier for waving the Tricolour at what he considered to be one of the lowest moments in the history of American democracy. Responding to Tharoor, Varun Gandhi shared an old photo of Tharoor with Vicent Xavier which had been making rounds online.

Xavier explained that he met Shashi Tharoor in 2015 and had interviewed him over lunch in Washington.

"I met him twice after that in Indian American, Malayali events. Tharoor is a very good orator.  I am always jealous of his English skills...I don't know whether I would consider him a great leader...I would want him to take a bigger role and rescue the Congress party in the shape it is in today, instead of getting into such controversies," Xavier told NDTV.

Responding to both the politicians arguing over him, he posted several pictures of flags of other countries which were also present at the US Capitol protest.

"There is nothing to be ashamed of, we are celebrating our diversity. The world has to know that America is not the racist country it is portrayed as. That the Republican party is not white supremacist. If they were racist, they would not allow me to carry the Indian flag. It was actually showing more respect," he told the news channel.

Xavier, a self-proclaimed 'Trump loyalist', is a resident of Virginia but hails from Kerala originally. Xavier was a member of the US President Trump's Export Council.

Xavier has stated that he had gone to the rally as there is always a "lot of patriotic fervour" at Trump rallies. He further added that "some miscreants" broke into the US Capitol on the day of the protest.