Lok Sabha Elections 2019 Results: The fight for Begusarai, also known as the Leningrad of Bihar is one of the most important face-offs in these polls. 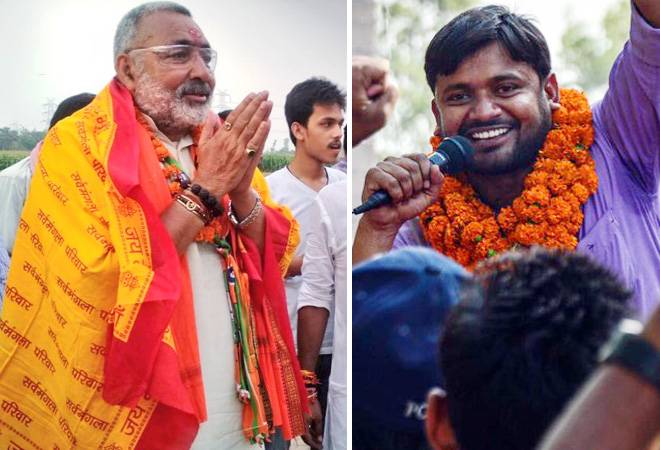 BJP's firebrand leader Giriraj Singh has taken the lead over CPI's Kanhaiya Kumar, a vocal critic of the Narendra Modi-led BJP government, as per early trends. Whatever the outcome, the fight for Begusarai, also known as the Leningrad of Bihar is one of the most important face-offs in the Lok Sabha Elections 2019.

The fight for Begusarai is a classic case of David vs Goliath. On one hand is Giriraj Singh, a well-known face of the largest party in India that is also the richest. On the other hand is Kanhaiya Kumar, a leader borne out of the students' movement in Jawaharlal Nehru University (JNU), who belongs to a party that has little to no influence left in India's political scene. In fact, Kumar raised the amount for campaigning through crowd-funding. According to reports, he had collected over Rs 70 lakh through crowd-funding.

Begusarai that has a BJP MP currently, used to be a Leftist bastion. Begusarai's association with the communists go as back as the 1930s. In 1962, for the first time Chandrashekhar Singh was elected to the Bihar assembly from Teghra, which is an assembly segment of the Lok Sabha constituency. From then on, Teghra has continued to elect a communist MLA. Not for nothing it is known as the Leningrad of Bihar.

Not only Singh, Begusarai was also the home-ground of other influential communist leaders. It is then poetic that one of the most popular faces of the third front in current times is fighting from this Lok Sabha seat.

However, it would have been foolhardy to not take note of Kumar's popularity just because there is overwhelming support for the incumbent Prime Minister. So, taking the offensive, Giriraj Singh had said, "Communists have indulged in a bloodbath in Begusarai for last several decades but now it will not happen anymore. I have been sent by the party to crush the head of any force which tries to convert Begusarai into Pakistan."

Not to be outdone, Kumar said that it would be the voters who would teach a lesson to the ones "insulting Begusarai". The fight that took place in the fourth phase of the election saw a voter turnout of 55%.

There is another candidate in the fray - RJD's Tanveer Hassan. In 2014, Tanveer Hassan was defeated after BJP's Bhola Singh received 39.70 per cent of the votes from 1,778,759 registered voters.

The outcome of this fight, while significant for the BJP, will be a crucial for the third front.