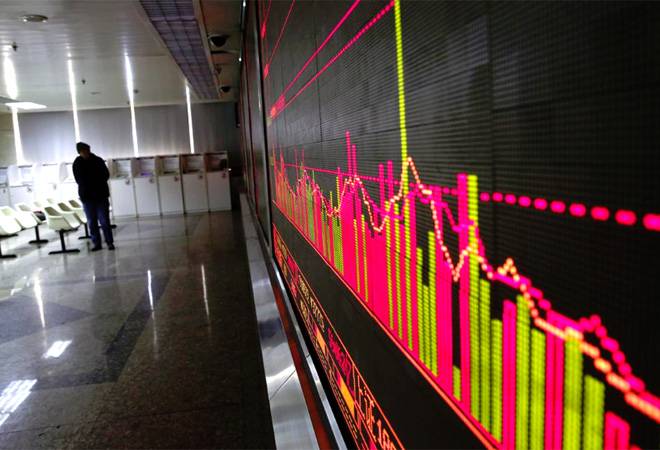 Share Market Update: Except IT and FMCG, all the other sector-based indices ended in the red today.

Share Market Update: Benchmark indices Sensex and Nifty erased early losses and closed marginally lower on Wednesday, tracking overseas trend amid escalating geopolitical tensions between US-Iran. BSE S&P Sensex closed 51 points lower at 40,817 and NSE Nifty50 ended 27 points lower at 12,025. Except IT and FMCG, all the other sector-based indices ended in the red today. Domestic indices followed global key indices that fell into red territory after Iran launched over a dozen ballistic missiles targeting at least two bases where US military and coalition forces' are stationed in Iraq, mere days after the assassination of their top commander General Soleimani ordered by the US. Geopolitical developments in the Middle East would the major driving factor for the Indian equity indices this week and will also have a bearing on crude oil prices and rupee movement, analysts said. On the domestic front, advanced GDP estimates suggesting India's economic growth may drop to an 11-year low of 5 per cent in the current fiscal also kept domestic investors on edge, traders said.

Benchmark indices Sensex and Nifty erased early losses and closed marginally lower on Wednesday, tracking overseas trend amid escalating geopolitical tensions between US-Iran. BSE S&P Sensex closed 51 points lower at 40,817 and NSE Nifty50 ended 27 points lower at 12,025. Except IT and FMCG, all the other sector-based indices ended in the red today.

Cabinet approves disinvestment in govt cos

Erasing early losses, shares of Mastek gained nearly 4% higher today after the company said it has sold partial stake of 8,24,500 shares in Majesco (USA) for cash consideration of USD 6.49 Million, in the open market on NASDAQ on January 7, 2020.

Commenting to gold's trend today, Jateen Trivedi, Senior Research Analyst (Commodity & Currency) from LKP Securities said, "Gold witnessed strong gap up opening on news of Iranian missile attacks on US base military bases in Iran/Iraq to take revenge on US somehow shall keep the buyers of Gold very much interested."

Commenting on Rupee's movement today, Jateen Trivedi, Senior Research Analyst (Commodity & Currency) from LKP Securities said,"Rupee traded in range of 71.87-72.11 a gap down opening on news of Iranian missile attacks on US base military bases in Iran/Iraq to take revenge on US was witnessed but it seemed short lived as rupee started traded stronger after gap down opening. Exporter seemed to participate in around the 72.00 levels. The levels of 72.00-72.25 shall keep acting as a crucial barrier for USDINR pair whereas 71.60-71.40 as supports".

The share price of Navin Fluorine International opened with a gain of 2.27% today and later touched an intraday high of Rs 1083.95, rising 6.08% on BSE today after the company said it has commenced commercial production at Dewas unit post successful mechanical completion and plant trials. The company's cGMP capacity addition at Dewas Plant, Madhya Pradesh, has commenced commercial production with effect from January 6, 2020, the filing added.

Subex shares rose nearly 4% in trade today after the company said it has received a five-year expansion of coverage of their partnership with Jawwal, a mobile network operator in Palestine.

Housing and Urban Development Corporation (HDIL) shares declined 2.3% intraday on Wednesday after the company said that Govt of India has assigned the current charge of the post of Chairman & MD of the company to M Nagaraj, the Director (Corporate Planning), for a period of 3 months with immediate effect or until further orders whichever is earlier, for performing usual routine day-to-day work of non-statutory nature attached to the post.

IndiGo shares opened with a loss of 2.54% today and later fell 3.07% following media reports suggesting that the airline's flight departures and arrivals have been impacted due to bad weather in Delhi, Varanasi, Srinagar and Imphal.

Shares of Bank of Baroda fell 2.65% today after the lender announced that the Capital Raising Committee of the bank approved issuance of Basel III compliant tier II bonds for aggregate total issue size not exceeding Rs 2,000 crore in single or multiple tranches.

Jubilant Life shares rose 7.63% in trade to the intraday high of Rs 572 after the company said it has redeemed its non-convertible debentures along with accrued interest of Rs 745 crore.

Recovering from early losses, shares of Ramco Systems gained 8% in trade today after the company said it has secured a multi-million-dollar Global Payroll and Workforce Management (WFM) deal from a leading Australian University.

With this win, Ramco will be expanding its foothold in the Higher Education vertical which is witnessing good demand for HR & Payroll transformation. Ramco will be partnering with a leading global consulting firm to implement its multi-country Payroll solution while will also offer Workforce Management solution in partnership with an Australian headquartered cloud based WFM provider, thereby providing an integrated Payroll and Workforce Management solution, the filing added.

Shares of Bosch Ltd declined nearly 2% today after the company announced that it has received a notice of strike from the respective Trade Unions at the company's plants situated at Bidadi and Naganathapura, stating that they are participating in the All India General Strike called by Central Trade Union on January 8, 2019.

YES Bank shares traded 4% today after the private sector lender said its board of directors would discuss and consider raising of funds in a meeting to be held on January 10.

YES Bank in a communication to bourses said, "Notice is hereby given that a meeting of the Board of Directors of YES Bank Limited ('the Bank') will be held on Friday, January 10, 2020 at Mumbai, inter alia, to discuss and consider raising of funds by issue of equity shares / depository receipts / convertible bonds / debentures / warrants / any other equity linked securities, through permissible modes, subject to necessary shareholders/ regulatory approvals, as applicable."

Benchmark indices Sensex and Nifty traded in the red and fell 0.75% each on Wednesday amid escalating geopolitical tensions between US-Iran. BSE S&P Sensex fell 300 points lower at 40,575 and NSE Nifty50 traded 93 points lower at 11,960.

L&T, Kotak Bank, HDFC Bank, SBI, Axis Bank, NTPC and Titan were among the top losers in trade today. On the other hand, TCS, Tech Mahindra, UltraTech Cement, Bajaj Auto and Reliance Industries were among the top gainers of Wednesday.

Suzlon Energy shares slipped over 10% today after the company has informed the exchange on defaulting payment of interest (Rs 538.92 crore) as well as repayment of principal amount (Rs 6,717 crore) worth Rs 7,256 crore on term loans from State Bank of India led consortium of 18 banks and Indian Renewable Energy Development Agency.

There are only sellers and no buyers trading the stock.

According to traders, domestic stocks plunged as tensions in the middle-east heightened after Iran launched over a dozen ballistic missiles targeting bases where US military and coalition forces are stationed in Iraq.

The attacks were in revenge for the killing of the commander of Iran's Revolutionary Guards, General Qasem Soleimani on Friday, which was ordered by US President Donald Trump, as per Iranian state TV.

On the domestic front, advanced GDP estimates suggesting India's economic growth may drop to an 11-year low of 5 per cent in the current fiscal also kept domestic investors on edge, traders said.

Commenting on Nifty's movement on Wednesday, Naveen Kulkarni, Head of Research of Reliance Securities said,"Global market situation is tense on escalating tensions in Middle East. Focus over the next few days will be on the macro developments but soon as earnings start, focus should shift to corporate earnings. The Nifty 50 index has good support at 11,850 levels and one can expect a bounce from there. On higher side 12,200 will act as resistance which is the last month close and recent high after the correction."

Except IT, all the other sector-based indices traded in the red, with over 1% fall seen in PSU Banking scrips, followed by 0.80% decline in media and metal stocks.

Benchmark indices Sensex and Nifty recovered from early losses although traded in the red on Wednesday amid escalating geopolitical tensions between US-Iran. BSE S&P Sensex fell 130 points lower at 40,734and NSE Nifty50 traded 57 points lower at 11,995.

Reliance Power shares declined 4.8% in early session today after the company informed the exchanges that the total financial indebtedness as of December 31 including short-term and long-term debt stood at Rs 934 crore. Of this, the amount of default as on till date stood at Rs 685 crore.

Shares of Reliance Communications fell 4.6% as company informed the exchanges that the total financial indebtedness as of December 31 including short-term and long-term debt stood at Rs 32,575 crore. The company also informed in a separate filing that the 16th meeting of Committee of Creditors of Reliance Communications is scheduled to be convened today on January 8, 2020.

Ajanta Pharma shares climbed 1.75% in trade on Wednesday after the pharma company announced that it has received USFDA nod for a drug used in adults to prevent infection with Cytomegalovirus (CMV) that may occur after an organ transplant.

Rupee skids 20 paise to 72.02 per US dollar in opening trade as Mideast tensions flare up after Iran attacks US forces in Iraq

India's nominal gross domestic product (GDP) is expected to grow by 5 per cent in financial year 2019-20 compared to the growth rate of 6.8 per cent last year, according to the first advance estimates released by the Central Statistics Office on Tuesday. The government's estimate, which is in line with the Reserve Bank of India's (RBI's) estimate of 5 per cent, is based on the GDP growth in the first two quarters of the current fiscal and other macro data.

Market slips over 1% in pre-open session

Oil, gold soar after Iran strike on US forces

Gold and oil shot higher after Iran fired rockets at an Iraqi airbase that hosts US military forces, stoking fears of further sharp escalations in a developing conflict.

Oil skyrocketed today, with Brent crude futures shooting back above $70 per dollar to their highest level since mid-September and US brent crude soaring 4.42% to $65.47 a barrel. Rising oil price is likely to impact India's economy negatively as the country imports over 80% oil from the overseas.

Asian shares saw a sharp sell-off in equity market as investors turned cautious amid increased tensions in the Middle East after the news that the Iran hits US airbase at Iraq.

Shares of public sector banks will be in focus today as central traders unions and bank unions have announced a nationwide strike in order to protest against the 'anti-national' and 'anti-people' policies of the government. Services like banking, transport and education would be the most hit as the trade unions, including INTUC, AITUC, HMS, CITU, AIUTUC, TUCC, SEWA, AICCTU, LPF, UTUC along with various sectoral independent federations and associations, hold a nationwide strike against the Modi government's "anti-people" policies.

Reliance Communications, Suzlon Energy, Canara Bank, Thomas Cook, Goa Carbon among others are the top stocks to watch out for Wednesday's trading session

Iran launches missile strike against US in Iraq

Iran has launched over a dozen ballistic missiles targeting at least two bases where US military and coalition forces' are stationed in Iraq, the Pentagon said on Tuesday. These attacks came after the killing of the commander of Iran's powerful Revolutionary Guards, General Qasem Soleimani, in a US drone strike, which was ordered by President Donald Trump, on Friday.

Yesterday, indices Sensex and Nifty closed 0.5% higher on Tuesday, backed by strong global equities after investors calmed in the absence of any further escalation in the Mid-east tensions. BSE S&P Sensex closed 192 points higher at 40,869 and NSE Nifty50 ended 59 points higher at 12,052. Sectorally, all the indices closed in the green, with over 2% rise in realty stocks. Both the key market indices Sensex and Nifty have dropped 2.5% each over the last two sessions, amid globally weak equities.

Crude oil touches $71.75 after Iran attacks US forces in Iraq