Shares of Bajaj Auto fell nearly 3 per cent today after Bank of America Securities (BofA Sec) downgraded the stock to 'underperform' from a 'buy' call. The international brokerage and financial services body cut its target price to Rs 3,450 from Rs 4,200.

In a report, the rating agency said that inflation reduces purchasing power and would weigh on the revival of consumption -- the largest component of GDP which has been backsliding for a while. READ MORE

Shares of Reliance Industries Ltd (RIL) fell over 8 per cent today after the government announced taxes on windfall gains made by crude oil producers. The government imposed an additional cess of Rs 23,250 per barrel on domestic crude production.

The move is aimed to take away windfall gains accruing to producers from high international oil prices. It has also raised export duties on select petroleum products. READ MORE

The rupee depreciated 5 paise to a record low of 79.11 against the US dollar in opening trade on Friday as persistent foreign funds outflows weighed on investor sentiments.

At the interbank foreign exchange, the rupee opened on a weak note at 78.99 against the American dollar, then lost ground to quote at 79.11 -- its all-time low level, registering a fall of 5 paise from the last close.

On Thursday, the rupee fell 3 paise to close at a fresh lifetime low of 79.06 against the US dollar.

10:00 am: Globus Spirits stock rises 4% on agreement with Tilaknagar Industries

Shares of Globus Spirits Ltd rose over 4 per cent amid a weak market today after the company said it would provide various services to distillery assets of Tilaknagar Industries. Globus Spirits stock gained 4.31 per cent to Rs 955.75 against the previous close of Rs 916.30 on BSE. "H1 of 2022 has ended with the benchmark S&P 500 correcting sharply by 21% - the worst half since 1970. This weakness has reflected declines in other markets too. But it is important to appreciate the fact that India  has outperformed with Nifty correcting only around 9%.

With the economy showing signs of gradual recovery despite global headwinds (RBI), the prospects for H2 appear better for markets.

Leading indicators suggest improving prospects for banking, IT, telecom and autos. Stock price movements in the near-term in July will be in anticipation of better-than-expected Q2 results in these segments. Metals stocks are likely to bottom out absorbing the poor Q1 results." 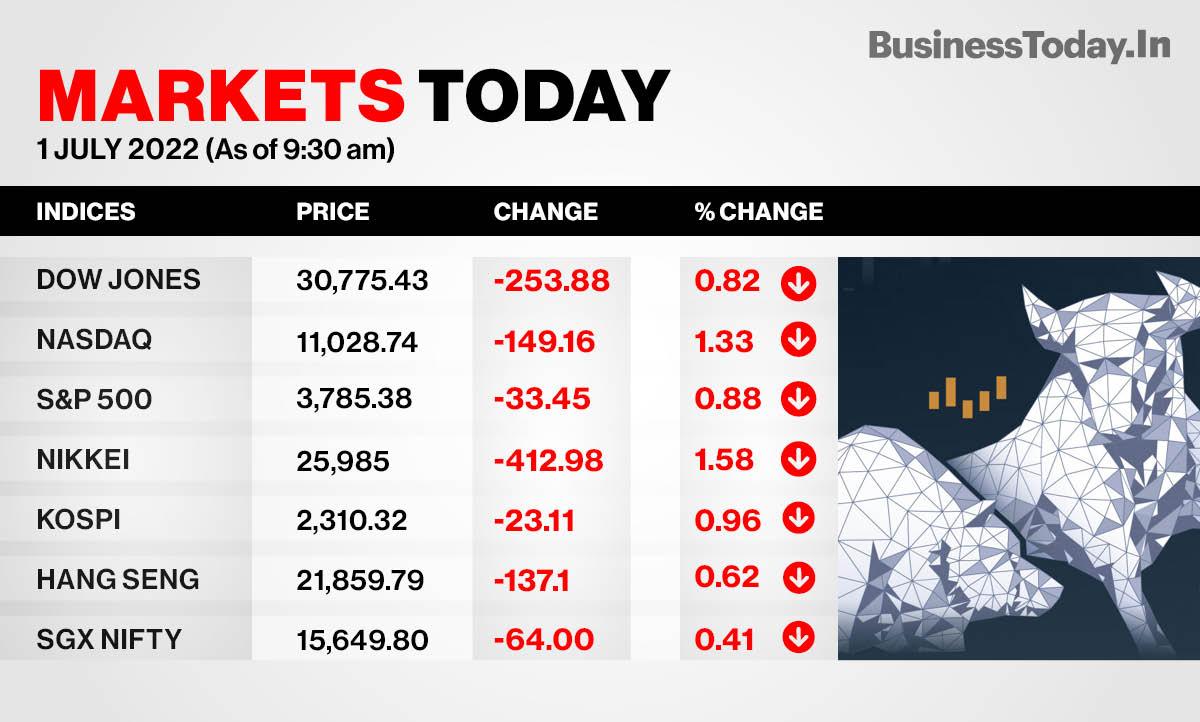 The Indian market is likely to open lower as SGX Nifty fell 31 points to 15,691. The Singapore Stock Exchange is considered to be the first indication of the opening of the Indian market.

Sensex ended 8 points lower at 53,018 and Nifty lost 19 points to 15,780 in volatile trade. Tech Mahindra, Bajaj twins were the top Sensex losers, falling up to 2.09 per cent. Axis Bank, SBI, and Kotak Bank were the top Sensex gainers, rising up to 1.74 per cent. Market breadth was negative with 1,369 stocks ending higher against 1,907 stocks falling on BSE. 144 shares were unchanged. Banking stocks were the top sectoral gainers with BSE bankex ending 236 pts higher.