With the CEO coach's inspirational words, the first day of the even comes to an end, but MindRush does not. Meet us tomorrow (November 28) with some more interesting sessions in business and leadership.

The CEO winners get together to capture the moment.

You want to get ahead of attackers? Be an attacker and make the first move. With these words of wisdom, Mr Charan leaves the stage.

Globally, the mood about India is positive. People come to invest, they admire PM Modi but they want to see more action, says Ram Charan.

No nation ever gets built without leaders and therefore leadership holds the key, says Ram Charan.

An now, for the Best CEO overall in the Large companies category... The award is shared by, Mahindra & Mahindra CMD Anand Mahindra and TCS CEO N Chandrasekaran 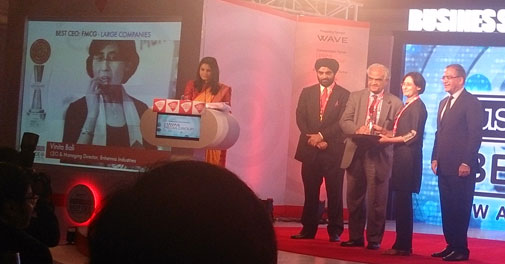 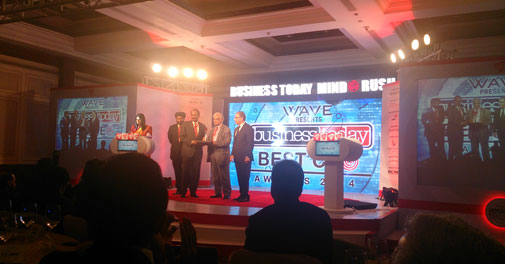 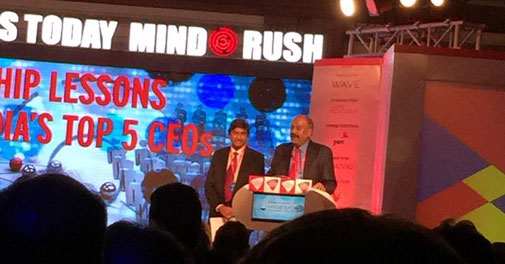 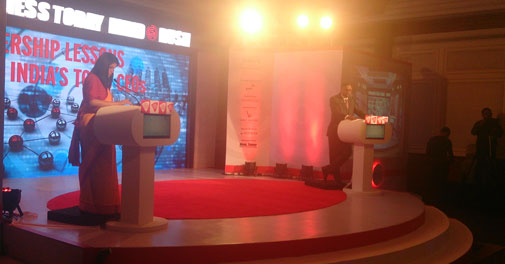 Honouring the best CEOs of India at #MindRush14 https://t.co/LTpmpOolMX

Now, for the most awaited part of the evening... Who is India's Best CEO?

7:56 pm: After providing meaningful insight into the operations of HDFC and banking as a whole, Keki Mistry leaves the stage.

"We have been running our company through a good mix of convention, prudence and dynamism. Our market capitalisation is $30 billion and the CAGR over the last five years has been 20 per cent," says Mistry.

Operational efficiency and profitability through strong loan approval systems and recovery methods was also key for HDFC, adds the executive.

"When HDFC was set up, the biggest challenge was raising the resources," says Mistry.

7:45 pm: After management tips from the pharma sector honcho, Keki Mistry of HDFC speaks on how to maintain growth momentum even when the real estate market is going through a major churn.

Explaining the drug, Saldanha says, "It is developing a therapy for a particular disease. Our efforts are first-in-class."

7:38 pm: The CMD says "the ability to be patient" is key to being an innovative next-generation drug maker.

7:33 pm: Saldanha says pharma sector should focus on innovation and talent development. "The generic growth story for India is good but a lot more needs to be done on the innovation front. Finding partners is a critial issue as cash flow is important. There should also be a culture of innovaton," adds Saldanha.

After touching upon important banking and economy-related issues, Kidwai steps down from the stage and Glenn Saldanha of Glenmark Pharmaceuticals takes over.

Regarding black money, the HSBC India head says it is an issue. "We have to do whatever needs to be done. Maybe GST will be a good check," says Kidwai.

7:30 pm: In this age the banks have to be more meaningful to its customers and therefore will have  come up with new solutions, says Kidwai

7: 26 pm: About the presence of women in the workplace, Kidwai says, "Happy to know that more and more companies and workplaces are following meritocracy and women are getting a fair deal."

7:24 pm: Ecommerce is the future and the digital space is the next challenge and also an opportunity for banks, says Kidwai. 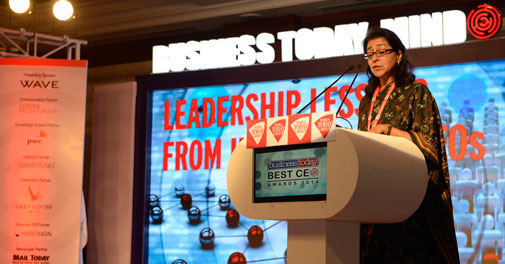 However, hitech and low cost model is the need of the hour.

She says financial incusion is still a challenge for India, but the new banking licence might help.

7:15 PM: Naina Lal Kidwai, chairperson of HSBC India, takes the podium. She speaks about banking in tumultous times in India.

Hear hear! yes i am developing airport outside India and looking for more, says GM Rao of GMR #MindRush14 @BT_India

7:10 pm: We have a global strategy in constructing world-class airports anywhere in the world. "We can design, build and operate airports," says the GMR chairman.

As it is, a south Indian is a foreigner in Delhi and I had to coordinate with 59 departments, says Rao.

"Had I known how challenging it is to build an airport, I wouldn't have taken it up. But after I decided to take it up, I took it as a challenge," Rao says. 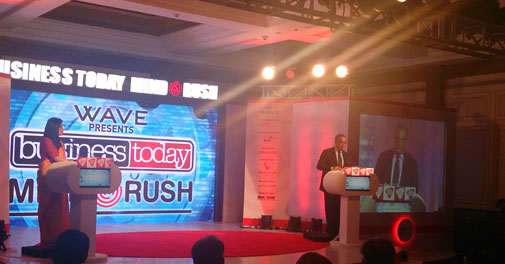 6:56 pm: Next up is Grandhi Mallikarjuna Rao of GMR Group. He speaks on 'How to create and run a world-class airport from a scratch'.

"We've got a strong culture of performance," says Chandrasekeran and leaves the stage.

6:55 pm: Chandra says TCS will have to ensure the culture of performance in the company. 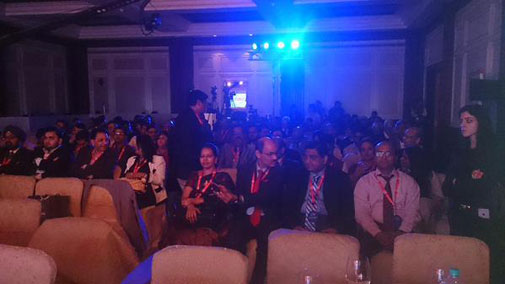 The entire tablet revolution happened amidst the financial crisis, says the TCS CEO.

N Chandrasekaran says, in the last 5-6 years we have seen the Indian economic churn in different forms. "The general principle during good times is that businesses tend to decentralise and grow even at the cost of efficiency, and centralise for efficiency during tough times," he says.

"I think Prime Minister Modi's 'Make in India' campaign is right on the button. It addresses the fundamental distortion of our economy, in which 50% of our workforce in agriculture only contributes 14% of GDP," says Purie.

He not only has the vision but has a track record as a doer.

Purie says the reason he is hopeful (about the economy) is because India has a talented leader in charge who works hard, will not tolerate corruption and most importantly has the right vision.

6:40pm: The Indian stock market is on fire with more foreign money coming in than any emerging market, says Purie. 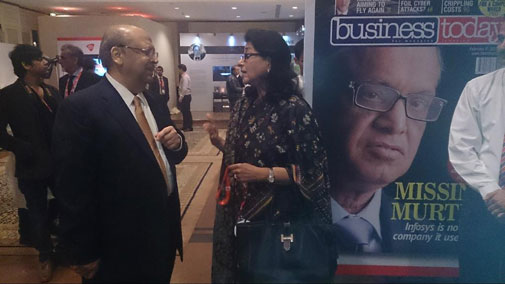 Mr Purie says the economy is at a tipping point. "The policies being set by the new government under the leadership of Prime Minister Narendra Modi, have ushered in far greater confidence in the Indian economy," he says. 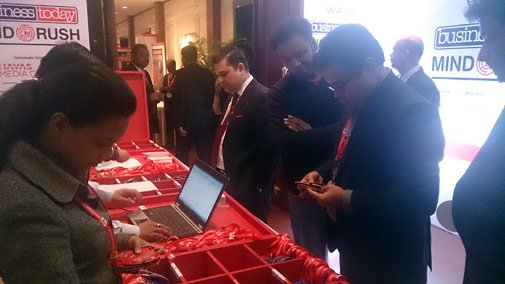 6:17 pm: N Chandrasekaran of Tata Consultancy Services (TCS) also arrives for the event. The CEO will give management classes on 'Doing Business During a Global Churn'.

6:08 pm: Glenn Saldanha, CMD of Glenmark Pharmaceuticals, has also arrived. Later on he will be speaking on 'Creating a new generation, research-focused drug maker'.

5:56 pm: Vinita Bali of Britannia Industries arrives for the event.

Getting ready to celebrate the Best CEOs of India at #MindRush14 @BT_India https://t.co/HUkw7DwCXB

5:50 pm: Naina Lal Kidwai, HSBC India head, arrives. She is scheduled to give management lessons on 'How to do banking in tumultuous times'.

5:49 pm: India Today Group Chairman and Editor-in-Chief Aroon Purie will give the welcome address at the event in a short while.

Ahead of Business Today's Annual Best CEO Awards this evening, guess who the winners are. @BT_India #mindrush14 pic.twitter.com/zPVZn5PF9h

What's in store? - Management lessons from some of the corporate executives followed by the Best CEOs 2014 awards ceremony.

All set for an evening of recognising India's best CEO's at @BT_India #mindrush14 pic.twitter.com/TWmaT8egvP

Welcome to live updates from The Oberoi, New Delhi, where Business Today is hosting Mind Rush 2014, an event that brings bring global thought leadership closer to the home-grown achievers. Get ready for the two-day event bringing together the best minds & practitioners in business.