News
OPINION
Columns
How commodities will perform in the fortnight ahead

The committee also noted that the recent global economic and financial developments have been hampering the economy of the United States which prompted them to leave the borrowing rates unchanged.

Naveen Mathur
On a fortnightly basis, global equity markets traded on a mixed as markets discounted the dovish move by the US Federal Reserve who cut its projection for the number of 2016 rate hikes from four to two. The committee also noted that the recent global economic and financial developments have been hampering the economy of the United States which prompted them to leave the borrowing rates unchanged. 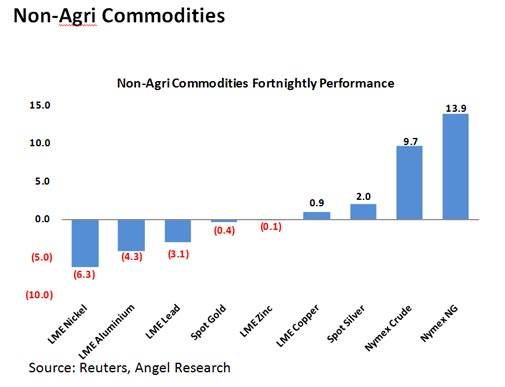 Last fortnight, LME Copper prices gained 0.9 percent as ICSG forecast a global refined copper deficit of 56,000 tonnes this year. Further, World mined production is now expected to grow by just 1.5 percent in 2016, compared with projections of 5.1 percent and 4.2 percent in April and October 2015 respectively. Also, U.S. monetary officials flagged fewer rate hikes this year because of a fragile global economy, knocking the dollar and boosting the value of commodities.

However, sharp gains were restricted as Premier Li Keqiang at the recent annual meeting announced a 6.5 percent to 7 percent expansion goal, down from an objective of about 7 percent last year. Moreover, Output in Peru surged 40 percent in January from a year earlier as Freeport's Cerro Verde operation boosted volumes and mines built by Minera Chinalco and Hudbay Minerals Inc. completed ramp-ups. MCX copper prices fell by 0.5 percent in the last fifteen days.

In the past fortnight, WTI oil prices rose by 9.8 percent while MCX crude oil prices rose by 10.10 percent. Optimism that major producers will strike an output freeze deal next month amid rising crude exports and gasoline demand in the United States. OPEC kingpin Saudi Arabia and non-OPEC producers led by Russia will meet on April 17 in the Qatar capital Doha, aiming for the first global supply deal in 15 years. Technical pressure and worries that U.S. crude stockpiles were still growing amid falling output and refinery maintenance are factors capping the oil prices.

Recent inflows in the SPDR gold trust is an indication of rising investment demand in gold. Besides, the prospects of reduced rate hikes forecast by the US Federal Reserve are all push factors for gold prices to rise higher in the coming fortnight.

Crude oil prices will rise on the prospects that OPEC and Non OPEC producers will freeze on a cut in output in order to prop up prices. However, rising crude inventories in the US is a cause of concern.

We expect base metal prices to trade lower as investors will be cautious ahead of US GDP data due on 25th March. Further, markets will be cautiously watching employment numbers from the US. However, sharp downside will be restricted as China's Commerce Minister recently said foreign trade was likely to show a big rebound in March. 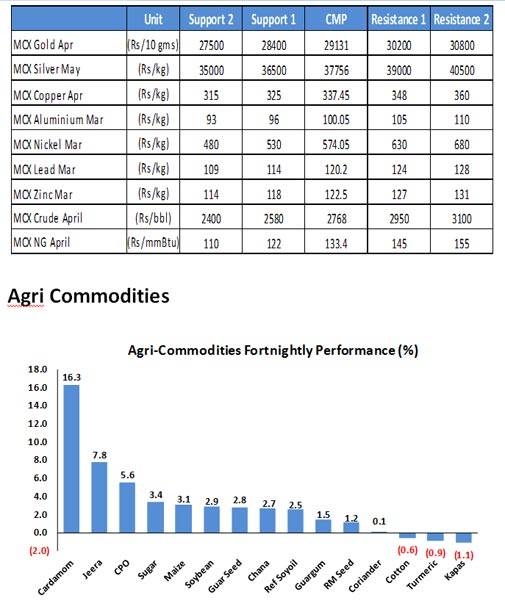 During the first half of March, the rainfall situation in the country has improved as surplus rainfall recorded in North, west and Central region. The deficient, scanty and no-rain regions are confined to the South Peninsula, East Coast and the North-Eastern States. However, rainfall during February was limited to eastern and far northern states.  Meanwhile, dry weather across Punjab, Haryana, Uttar Pradesh, and Rajasthan aided wheat and rapeseed maturation.

During last fortnight, Chana futures improved due to increase in spot demand for new season crop. The most active NCDEX Chana for April delivery closed higher by 2.7 % to close at Rs. 4,336 per quintal.  However, the prices were little down in last few trading session market assess the damage caused by recent rains in chana growing regions. During the first week of March, rains, accompanied by strong winds and hailstorm, across North and Northwest India have flattened wheat, chickpea, mustard and other crops. India has imported 5.79 lt of Chana until December in the current financial year. In December, country imported over 2 lt of chana which is a record.

Soybean futures traded higher on reports of good demand for edible oil before the start of festival season. Improve in global edible oil prices too help soybean to gain. Soybean price for April delivery on NCDEX closed higher by 2.9% to settle at Rs. 3,777 per quintal.  Similarly, CBOT Soybean ended higher during the last fortnight due to strengthening currency in top exporter Brazil and strong demand for U.S. supplies. There are reports of lower yield for next crop in the US and Brazil too supporting prices at higher levels.

Mustard prices have improved over the last fortnight due to fear of crop damage as unseasonal rains over mustard growing regions.  Moreover, lifting of stock limit for oil and oilseed in Rajasthan also supported prices at higher level. Mustard prices have been under pressure during last week due to higher arrivals from the new season crop coupled with higher imports of edible oil.

Ref. Soyoil prices have improved during last fortnight tracking the international edible oil market.  Ref. Soy oil on NCDEX for Apr'16 delivery, gain 2.5 per cent to close at 625.20 per 10 kg. In CBOT, the soyoil prices for the most active May'16 contract jumped about 8.7 per cent during the fortnight to close at 33.65 cents per pound due to higher demand from the US as palm oil prices have increased to highest levels.

The CPO prices on MCX for March delivery traded on positive note. March delivery contract at MCX close 5.6 per cent higher at Rs. 512.8 per 10 kg in last fortnight. The prices have jumped due to  increase in international prices on fear of significant drop in production due to dry climatic conditions in Malaysia and Indonesia.

Among softs, cotton and kapas traded little lower during the last fortnight, as textile and export demand is steady. Moreover, cotton procurement by government agencies stopped during March due to higher prices in February. Meanwhile, ICE cotton futures traded on mixed note to settle higher by 0.09 per cent due to reports of good exports data by USDA. However, higher acreage forecasted for the US and uncertainties in Chinese cotton auction.

Sugar futures traded higher during last fortnight due on report of good exports from the country. Indian millers have so far, contracted about 13.88 lakh tonnes of sugar for exports during the current sugar year which started in 1st Oct., against 2 lt in the corresponding period last year. As per ISMA, sugar production is likely to be about 25.50 mt, a fall by 9% compared to last year production. Mar'16 delivery closed higher by 3.4 per cent to close at Rs 3,328 per quintal. Similarly, ICE raw sugar Mar'16 jumped by 7.7 per cent during last fortnight amid growing concerns over supplies in the world's top producers. Thai crop affected due to insufficient moisture while slow fading of the El Nio pattern expected to affect crop potential for next season in India and other Asian countries. Moreover, strengthening of Brazilian currency encouraged producers to hold back their stocks due to lower profits.

Among spices, Cardamom and jeera traded on positive note due to good seasonal as well as export demand. Cardamom season is about to end and the last picking is going on in Kerala while new season crop for jeera is arriving at Gujarat markets. Turmeric prices have declined due to improvement of arrivals in the spot market and reports of adequate stocks with the stockists. Similarly, the coriander prices have also slipped from its higher levels during last fortnight on lower demand and good arrivals in Rajasthan and Gujarat markets.

We expect chana prices to trade sideways to lower on heavy supplies during peak season. However, news on crop damage in Maharashtra and Madhya Pradesh due to recent unseasonal rains and hailstorm may support prices.

We expect cotton prices to trade sideways to lower on muted demand in the domestic market.  Reports of higher carryover stocks too weigh on prices.

Among spices, we expect Jeera futures to trade mixed due to reports of crop damage and limited export demand.  Turmeric may trade sideways on higher arrivals expected as peak season approaching.  Cardamom may trade higher on good export demand.