Rebooting Economy VII: Where are the green shoots in Indian economy?

Contrary to government claims, not a single indicator is encouraging; rather the numbers are so bad that government has stopped releasing industrial output data after April and those that are available for May and June are rather depressing

The official data (Index of Industrial Production or IIP in short) on manufacturing, electricity and industrial output (general index) is available until April 2020
Prasanna Mohanty

There is no official data on job and income losses due to the lockdown because no government agency is tracking it. A few private initiatives have tried but their assessment varies so widely that one would have to be very careful in reaching any conclusions.

Their assessments are important nevertheless because they provide some indication about the gravity of the problems.

Here are a few such findings.

The Azim Premji University's first round of survey during April 13-May 20, 2020, says the job loss caused by the lockdown was 66% and the income loss 64%.

The percentage of job loss works out to be 276.2 million in number, assuming the total workforce at 465.1 million in 2017-18. (For more read 'Coronavirus Lockdown XX: 276 million unemployed, economy in doldrums; time to recalibrate India's response')

It further said 47% of households didn't have enough money to even buy a week's worth of essentials. The sample size of this survey was 5,000 households. When its survey resumes in August, it will provide some assessment about how the unlocking is impacting people and economy.

Business information company Centre for Monitoring Indian Economy (CMIE) survey carries out regular household surveys over the past few years, tracking, among others, the state of employment. Its surveys show the job loss ranged from 122 million (30% job loss) in April (lockdown started on March 25) to 101 million (25% job loss) in May and 57 million (14% job loss) in June 2020 - compared to the average employment of 404 million in 2019-20.

It did not talk about income loss; its sample size is not known but more of it later.

Why do the two private surveys vary so much?

Here is a word of caution from PC Mohanan, former chairman of the National Statistical Commission.

He says: "This lockdown is an unusual situation which the conventional metrics may not really explain. For example, if an enterprise is shut for April the employees continue on the roll, the system will not treat them as unemployed even if they did not work or get paid for the month. So, one has to be careful in interpreting current data coming out from some agencies."

His observations are limited to regular wage/salaried workers (almost entirely in organised sector) since the state of job loss is very different for unorganised workers - self-employed and casual workers who view employment differently.

Self-employed workers are temporarily out of work but as soon as the economy opens up they will be back in business. Casual workers virtually live on a day-to-day basis and their employment and income are directly linked to the opening up of economic activities.

Mohanan's word of caution would also explain why income loss may be disproportionate to job loss, as another private study found with the help of CMIE.

Using the CMIE's services, a few scholars from the Chicago University and University of Pennsylvania assessed income loss during April 18-30. Their findings show 84% of Indian households reported loss of income since the lockdown. About 66% households reported having enough resources to survive for more than a week before facing distress.

Their paper, 'How are Indian households coping under the COVID-19 lockdown? 8 Key findings', also pointed out that while the income decline was reported by more than 90% of households in the middle-income groups; this was 85% in the lowest income group and 66% in the top income group.

It explained the differences in income decline: "The disproportionate impact on households in the middle of the income distribution may partly be due to the fact that these households are most likely to be dependent on sources of income which are hit due to the lockdown. The households in the highest quintile are more likely to have stable salaried jobs, with the ability to work from home and continue to earn a living."

As for the lowest income group, it said: "Households in the lowest quintile may be more heavily concentrated in occupations that have continued despite the lockdown (e.g. agriculture, food vendors) or have benefited from the targeted transfer programmes. In contrast, the remaining households appear to be exposed to substantial job losses that have not been buffered by additional transfers."

The study disclosed that they put two questions for their study (i) fall in household incomes and (ii) how long a household can continue without outside help in the CMIE's consumer pyramids household survey (CPHS) that covered 5,779 households.

They also disclosed that while the CMIE's CPHS usually surveyed about 175,000 households every four months the sample size had shrunk to 45% "through the lockdown".

The International Labour Organisation (ILO) used a different approach to assess the job and income losses (not surveys like the previous two studies).

It relied on the PLFS of 2017-18 for data and looked at those employed in non-essential industries, assuming that they were the ones unable to work and at risk of job loss.

On June 16, Prime Minister Narendra Modi said, "green shoots are now visible in the economy". He cited the case of power and fertiliser consumptions and Kharif sowing to buttress his point.

Green shoots in the economy are relevant for recovery from losses in jobs and incomes.

Some of these are quite misleading and irrelevant. Here is how.

Firstly, the procurement of food grains and sowing (fertiliser sale) happens every year in May and June, after the Rabi harvesting is over and preparations begin for the Kharif crop with the monsoon hitting some parts on June 1 (Kerala). Comparing such data with those of April, as the finance ministry did, is meaningless and misleading because such activities never happen in April. These data should have been compared with the previous years' corresponding data.

Secondly, the Railways resumed its freight and passenger services (special trains to take migrants home) during May and June after the lockdown on March 25. So, comparing it with April, when both services were suspended, is misleading. It should have compared these data with the corresponding data of previous years.

Thirdly, the pick-up in three finance-related indicators - corporate bonds, mutual fund assets and forex reserves - in May and June merely indicates resumption of some activities stopped on March 25 and the COVID-19 scare spread. This comparison too is misleading.

Besides, pick up in forex reserves is mainly due to the fall in crude prices and lower import of petroleum products due to demand and consumption crash.

Fourthly, here is a reality check on "lower contraction" in manufacturing output, electricity consumption that the finance ministry claimed and much more.

Reality check on green shoots in the economy

The official data (Index of Industrial Production or IIP in short) on manufacturing, electricity and industrial output (general index) is available until April 2020. The following graph maps their growth numbers since January 2020.

Contrary to the claims, the RBI database shows a sharp decline and no data is available for May and June. That is because on July 11 it was disclosed that the government has decided not to do so "due to inadequate data collection". (Read 'India suspends release of industrial output data for lockdown period')

Notice how growth rates were touching the zero line in all of these cases in January 2020. If the finance ministry saw green shoots in the May and June numbers, why did it stop the data? Obviously, there is plenty to hide.

The RBI's database provides credit outflow data up to May 2020. The following graph captures growth in credit to non-food sector as well as its various components like the industry as a whole, MSMEs (part of industry), services and personal loans.

There is no evidence of green shoots but indication of a very slow resumption of economic activities. As for growth in consumption of petroleum products, it has been on a long-term decline and hence, it would be prudent to look at data for a longer duration. The following graphs map growth from FY17.

Notice how for most months, the growth is negative and close to zero. For addressing rural job loss (there is no programme to address urban job loss), the government is relying on the rural job guarantee scheme, MGNREGS, long condemned as a "living monument of UPA's failures". An additional allocation of Rs 40,000 crore was made to take the total allocation for FY21 to about Rs 1 lakh crore to ensure more people got jobs. Millions of migrants went back to villages due to the loss of jobs and shelter during the lockdown.

But if that was supposed to provide additional work, it is not happening on the ground.

The unmet demand for work is huge. It is far greater in states like Uttar Pradesh, Bihar, Madhya Pradesh and Rajasthan, that saw higher influx of migrants. The graph below uses data for the period April 1- July 13, 2020. 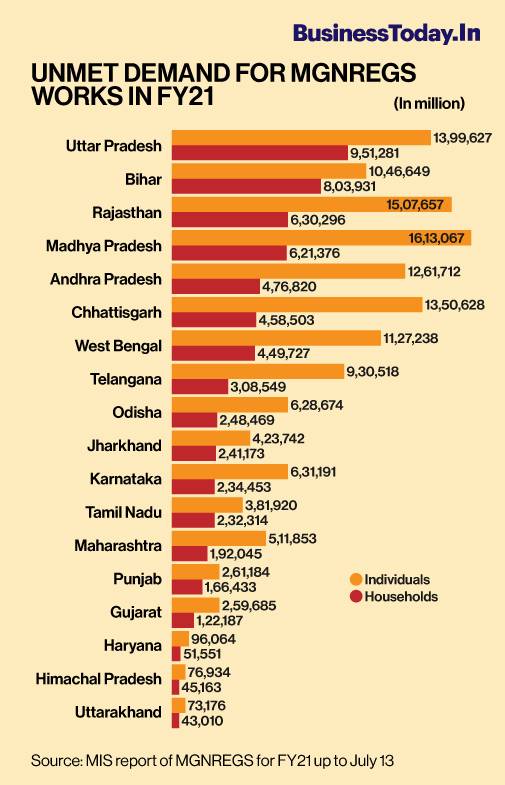 The huge unmet demand (both households and individuals) is primarily because the long neglect of MGNREGS makes it difficult for the administration to suddenly ramp up the works.

That the above graph presents only a part of the picture is evident from the fact that the number of households and individuals getting work is far below their numbers in previous years - as the following graph shows. Given the additional influx due to job loss, the demand from households and individuals should have been closer to the previous years than the case in FY21 so far.

The average days of work for households remains below 50 days (the previous five fiscals' average works out to be 48), even though the entitlement is for 100 days. During droughts and such exigencies, the law already provides to raise the number of days of work to 150 days.

In all, the ground realities don't present a very encouraging picture.

But that is to be expected given the fits and starts with which the social and economic activities are picking up. Several states continue to be completely shut till July 31 (Maharashtra, Tamil Nadu, and West Bengal), many are shutting down for short durations (UP shuts down for every weekend) or imposing complete lockdowns in specific cities and localities (Pune, Bangalore, Chennai, Guwahati, Hyderabad, etc. are shut).

The COVID-19 cases are growing dramatically, crossing 25,000 a day last week and touching over 30,000 (a day) this week. The total cases have crossed 10 lakh in a matter of weeks.

These are not signs of a quick economic recovery.

Given the grim predictions by many that the daily number of cases could cross the 1 lakh mark in a few months' time, it would be a long and painful haul for the people and the economy.