Innovation Is the Key: Vijay Govindarajan

Indian business has a unique opportunity to be a global leader in frugal innovations while solving the problems of every Indian, says the professor at Tuck School of Business. Dartmouth. 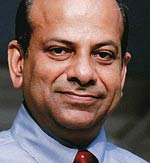 Vijay Govindarajan, professor at Tuck School of Business, Dartmouth
India's economic history can be divided into three eras. The pre-1990s era was the License Raj and the resulting Hindu rate of growth. The past two decades marked the second era, when Indian companies grew at attractive rates as the economy opened up. The next 20 years will be marked by innovation and globalisation.

Thus far, by and large, Indian companies have excelled in low-cost manufacture of products needed for the western consumer. To the extent they focused on the Indian consumer, it is typically at the top of the economic pyramid. The time has come for Indian companies to double their innovative efforts to solving the problems at the middle and bottom of the pyramid. The poor should not be viewed as a liability and burden on society but as consumers, entrepreneurs, producers, and - yes - partners.

On July 15 this year, the Tata Group, the maker of the Nano car, announced the launch of an ultra-low-cost, flat-pack house designed for the rural poor. The basic model will be available as a 20-square-metre pre-fabricated kit designed for onsite installation at the price of 500 euros ($700). A larger model will also be available at 700 euros ($980). There are also plans for a house that comes with a solar panel on the roof. The pilot house is being tested in 30 locations spread across India, with detailed feedback expected at the end of the year from the village Panchayats.

A month before the Tata announcement, a self-organized team from Mahindra & Mahindra won the corporate award for the $300 House Open Design Challenge (see www.300house.com). Working in their spare time, the M&M team designed a $300 house for the rural poor. The team, encouraged by the senior management, is now working on a pilot of its design.

We need thousands of such experiments to solve India's most pressing problems - be it housing, health, education, energy, or transport. These problems can be solved only with breakthrough innovations. Such innovations can be taken around the globe. After all, housing is a global problem. So are energy and healthcare. This is the essence of reverse innovation, one in which India can take the lead.


Companies like the Tatas, Mahindra, Birla, Reliance, Kirloskar and TVS must think big. They must embrace 10X improvements in the next five years - in products, processes, and people. Mahatma Gandhi had a big idea - civil disobedience. It moved an entire nation. Where are the big dreamers in India now?

Any nation that cannot look after its own people is a failed state. Indian business has a unique opportunity to be a global leader in frugal innovations while solving the problems of every Indian.

(The writer is Professor at Tuck School of Business, Dartmouth)