'Government must look beyond vehicle ownership and find real solutions' 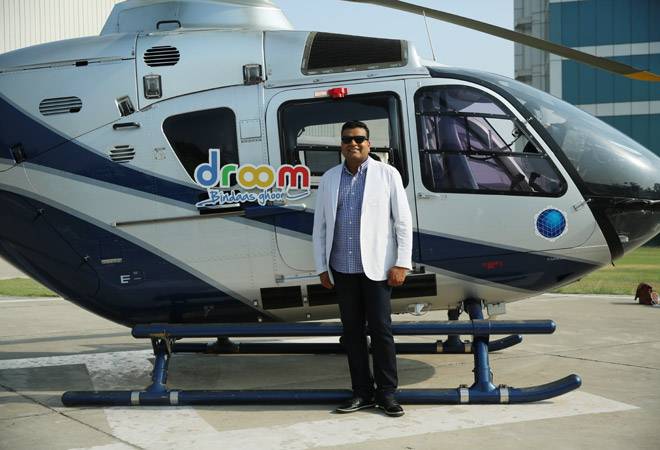 Q. It's been 3 years since you started. How has Droom evolved over these years?

When we started Droom, everyone thought there is already Quikr, OLX, CarWale, CarDekho, CarTrade, Zigwheel and Gaadi.com , then why would India need an eighth company in the same vertical?!

"What's wrong with Sandeep Aggarwal? He created ShopClues, which was such a unique concept. Why he is doing something in this crowded space?"  These are just some of the doubts people voiced quite openly. This is how they perceived Droom three years back.

But in three years we have clearly shown that online classifieds is a separate category altogether. They can operate in 150 categories of used items like dog wanted, accountant wanted, lawyer wanted, car for sale, house for sale, or looking for a match for a girl.

Discovery platforms are all about rich content, videos, ratings and reviews etc. However, we created a new category called end-to-end transactions in a marketplace setting for automobiles, which was unheard of in this country.

Some of our products have become the de-facto industry standards like Orange Book Value is now considered to be the only benchmark for used vehicle pricing in India. We have got 10 million plus monthly visitors, which may not be the case with many well-funded e-commerce websites in India.

Q. Tell us more about Droom Credit. Have you partnered with lenders?

Droom Credit was launched a few months back. It is India's first marketplace to offer auto loans for used automobiles. Before Droom credit, getting an auto loan for a pre-owned vehicle was full of nightmares because of many reasons. It used to take forever and involved lots of paperwork, high rejection rates, very unattractive credit terms and sometimes interest rates were as high as 18-24%.

We've partnered with 15 different lenders. Some of them are well known names in banks, fintech companies. These companies use our algorithmic credit risk engine to decide on whether to give loans to prospective customers or not, basis some intelligent analysis. In contrast to a traditional banking system, Droom Credit's credit risk engine considers 17-18 different factors which you must keep in mind as a lender to decide whether to give a loan or not. It's very effective and we are working with well-known banks and NBFCs to enable greater access to credit for our consumers.

Q. How many dealers do you have onboard?

We have 200,000 dealers in 500 cities across India on our platform and these include dealers of two-wheelers, four-wheelers and other services. A majority of them are dealers, but a few thousand of them would be providers of services such as car care, road side assistance, warranty, insurance and so on.

Q. There is one new feature that I saw on the website which is RTO assistance. How will it help customers?

We get the ownership title on your RC transferred seamlessly. So, when you buy a vehicle, one of the big headaches that you want to be relieved of is the trouble of RC Transfer. There is a Form 29, which gets filled, then you go to the RTO and then after a few weeks a new RC comes in your name. This is a service that we provide now. We have aggregated a lot of RC transfer agents in various cities and we are adding more.

We are building on this category. We aim to have a pan-India reach by the end of this calendar year.

Q. How big is the used car market in India and how much of it is online?

Let me give you a couple of data points. Firstly, the automobiles' category includes everything from two-wheelers, four-wheelers, trucks and commercial vehicles to new and used vehicles, auto loans, insurance and warranty. So, the entire automobile industry and ancillary services account for $180 billion annually, making India the 3rd largest market in the world after China and USA. Out of that $180 billion, roughly $30 billion is services. So, $150 billion will be new and used including two-wheelers, four-wheelers, recreational and commercial vehicles.

Q. You have listed private jet, luxury yachts. Are there buyers for these things?

Yes. We have listed these luxury cars like Lamborghini, yacht and plane on our website. While we do not see many buyers for this category, we have seen a lot of requests for rentals, as people can rent them on an hourly basis. During the wedding season and during elections, we see an increase in demand. A lot of people take limos during weddings. Yacht are often rented for corporate events in Mumbai.

Q. Do two-wheelers constitute a major chunk of your annual GMV?

We have actually exceeded that. We are currently running a run rate of 650 million.

Q. Which are the cities driving Droom's growth in India?

Q. Since India is considered to be a 'low trust' market, how do you plan to change the status quo when it comes to used vehicles?

We are solving the trust deficit in the country in a non-standard category called used vehicles, in a country which is a low trust market. We are trying to do this with Droom and its service delivery. If you think about it, a buyer has four pain points when they buy a pre-owned vehicle. These are:

If you can satisfy someone on these four parameters, then most Indians know it is better to buy a used vehicle because they will avoid suffering from a steep depreciation curve in the first two years, as in the case of new vehicles.

But these four aspects aren't that easy to address so quickly. You should build a lot of tools around them. We have a seller rating and review system like in case of brands like Uber, as well as the transaction history. We have an app called Eco, which is extremely comprehensive and scientific way of inspecting a vehicle.

We have OBV or the Orange Book Value that provides the fair value of any used vehicle. We have also created have Droom History to help find out if the documents of a vehicle are genuine or not. This is how we have created a trust mechanism where the sellers have access to the historical performance, ratings and reviews given by the actual buyers and can also evaluate the fair price of any used vehicles, within seconds.

Q. What is the percentage of individual to individual sales on your platform?

We are now a 36-month old company. For the first 13 months, we focussed on dealer to consumer transactions so that has been the bulk of our business. But every year, without any effort, the consumer to consumer business is also picking up. We are enabled from Day 1 for B2C, C2C, C2B and B2B, where B is the dealer. Right now, C2C is roughly 7 per cent of our business. We expect this to be 12-15 per cent by the end of the calendar year 2018.

So, it has 7 per cent without us putting much efforts into the C2C vertical. But I must say, now we have a marketing and business development team for C2C as well so we are expecting the share to go up in the times to come.

Q. You have only luxury cars in car rental category. Is there any specific reason you don't have budget cars?

We don't want to be in the normal car rental. If you want a self-driven car, you have Zoomcar. We are doing rentals for only such vehicles which are typically not affordable but they have a seasonal demand.

Q. You founded Droom 3 years ago, and you co-founded ShopClues 3 years before Droom. Is there anything else you are planning to get into?

As an entrepreneur, I love transforming an idea into an actual business, and raising money for that, creating a team, creating products and services. Everything from the initial stage adoption to going through mass market adoption is very exciting. I love the process. And perhaps we aren't launching a new company as yet, but we are always into something new - that's what entrepreneurship is all about.

The role of today's entrepreneur goes way beyond just launching a successful product. Every day is a manifestation of innovation in his company. At Droom, we have built not only a marketplace, but also built a host of ecosystem services tools such as Orange Book Value as a pricing tool; Droom History which curates historical data about an automobile; Droom Credit, which is India's first marketplace to get loans for used automobiles; and Discovery.

Q. How has the GST affected sales?

GST has caused a lot of confusion. We had problems in the month of October. In September, there was still a lot of momentum as the government had also relaxed it for a few months so everyone gets time to streamline their taxes.

The government has reviewed the GST for restaurants. After almost two dozen meetings of the GST Council, I am disappointed that the government is not doing something about the automobile category. I think they need to lower the GST taxes. This country does not have public transportation and the automobile industry gets beaten down because of the pollution.
Only 4 per cent of Indian households have a car and only 24 per cent of households have two-wheelers. India is the 67th country in terms of per capita vehicle availability. But it is easy for us to blame vehicles for pollution rather than identifying and eliminating the true source.

The government must look beyond vehicle ownership and find real solutions to the problem so that people have the freedom of transportation. It needs to keep the tax structure for vehicles very simple and accessible for common people. The Dealers Association of India has been representing this pain point to the GST Council.

"It's no more one size fits all"