Mahindra XUV300 has been launched as yet another offering in the compact SUV segment by the Indian automaker.

Mahindra XUV300 launch: Mahindra has launched its third compact SUV offering XUV300 for a starting price of Rs 7.90 lakh for petrol and Rs 8.49 lakh for diesel version. The much-anticipated Mahindra XUV300 is being projected by the company as a front-runner for the compact SUV segment. The XUV 300 is built on the X-100 platform, the same platform that was used in the popular SsangYong Tivoli. The XUV300 could be a game changer for the auto major, which has been struggling to make a mark in the SUV segment. The price of the SUV also puts the XUV300 at direct competition with the bestselling SUVs in the segment, including the Maruti Suzuki Vitara Brezza, Tata Nexon, and Ford EcoSport. Initial booking numbers suggest a huge excitement for the XUV300. The bookings for Mahindra XUV300 started on January 9. The company had received around 4,000 advanced bookings by February 11. In its pre-booking offer, Mahindra has asked its customers to drive home XUV300 after paying only Rs 20,000.

Hoping to conquer the SUV segment with the all-new "Cheetah", a name given to the XUV300, Mahindra and Mahindra Chairman Anand Mahindra, sharing a picture of  the XUV300 launch event, tweeted: "When you start typing a tweet, this prompt appears: 'What's happening?'  Well, this is what's happening this morning... A new launch...The XUV 3OO. Our new Cheetah..."

When you start typing a tweet, this prompt appears: 'What's happening?' Well this is what's happening this morning... A new launch..The XUV 3OO. Our new Cheetah... pic.twitter.com/cfjpq9tkBR

Every time we do a car launch I wonder how we can top this... And then our team goes one level higher... pic.twitter.com/NrcfB7i2S8 Mahindra XUV300 comes with a host of other features including 7 airbags, sunroof, and more.

M&M's  XUV300 will be offered with two engine options - a 1.2-litre, turbo-petrol motor and the same 1.5-litre, turbo-diesel motor. The compact SUV comes with a host of other features -- 7 airbags, sunroof, LED projectors headlamp and LED tail lamps, and 17-inch alloy wheels. The design of Mahindra XUV300 takes inspiration from the cheetah. It is equipped with segment-first features like dual-zone climate control, front parking sensors, steering modes (that alter steering weight) and heated wing mirrors. The compact SUV will be offered in four variants -- W4, W6, W8 and W8(0). Carrying forward the characteristics of XUV500, the grille of Mahindra XUV300 has a more angular frame and has a cheetah-inspired design.

Carrying forward the characteristics of XUV500, the grille of XUV300 has a more angular frame and has a cheetah-inspired design. The XUV300's headlamps integrate with the fog lamps. XUV 300 also comes with diamond cut alloy wheels, and a roof-mounted spoiler. M&M's XUV300 will come with a reverse camera and parking sensors, ABS, EBD, ESP and more. 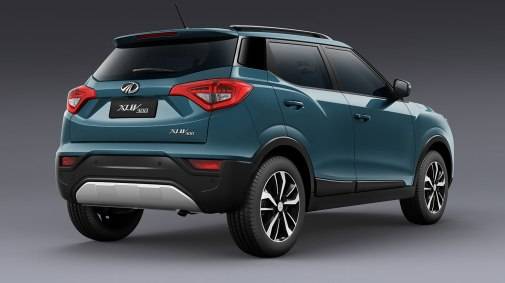 Mahindra XUV300 gets LED projector headlamps up front and LED taillamp cluster at the back.