It may have lost the crown to stablemate Dzire for the calendar year 2018, but a steep decline in sales for the last three months of fiscal 2019 (January-March period) has seen the compact sedan lose the advantage to long-time bestseller Maruti Alto.

With an overall tally of 259,401 units in fiscal 2019, Alto managed a 0.33 per cent growth over fiscal 2018 that proved just about enough for it to retain its crown for the 15th consecutive time in FY19. A 4.4 per cent growth in the last quarter as against an over 16 per cent decline in sales of the Dzire helped its cause. Dzire's tally of 253,859 units, a 5.72 per cent growth over the previous year, however, means it is closer than ever to Alto and the latter's dominance at the top may not endure beyond fiscal 2019.

There were no new entrants in the top 10 bestseller list in fiscal 2019 with Maruti accounting for all the top five positions and had seven cars in the top 10 list. With three cars, Hyundai was the only other manufacturer on the list. 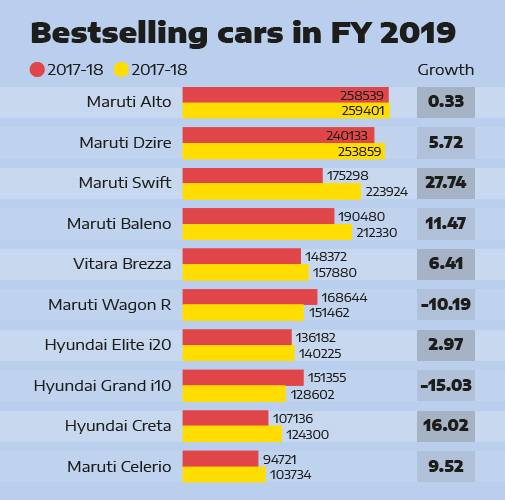 The biggest gainer during the year was the Maruti Swift, which received a full lifecycle facelift in February 2018 that helped it grow by nearly 28 per cent during the year and overtake Baleno as the third largest selling car.

Hyundai's Grand i10 witnessed the biggest sales decline of 15 per cent as the launch of the new Santro last October impacted its sales in the second half of the year. It also dropped one position on the list to number eight ceding ground to its bigger sibling Elite i20, which registered a 3 per cent growth. The only other car on the list to register a decline in sales was the Maruti Wagon R, largely due to a drop in sales during the months preceding its relaunch in January this year.

Seven of the ten cars were hatchbacks, while Dzire was the only compact sedan and the Brezza and Creta were the two SUVs. With average sales of under 8000 units per month in the first six months of its launch, the new Santro is unlikely to break into the top 10 list in fiscal 2020 but the chances of Hyundai's maiden compact SUV Venue are bright. It is expected to be launched in mid-May this year.

Outside the top 10, the biggest mover was Honda's Amaze that had received a full lifecycle facelift last year. The car registered a nearly fourfold jump in sales during the year at 85,061 units.

Hyundai to train 10,000 sales consultants on its new technology