"In the last 65 years, the investment had been less in Railways due to which the infrastructure increased by 30 per cent while freight and passenger traffic increased by 1500 per cent," the railway minister said. 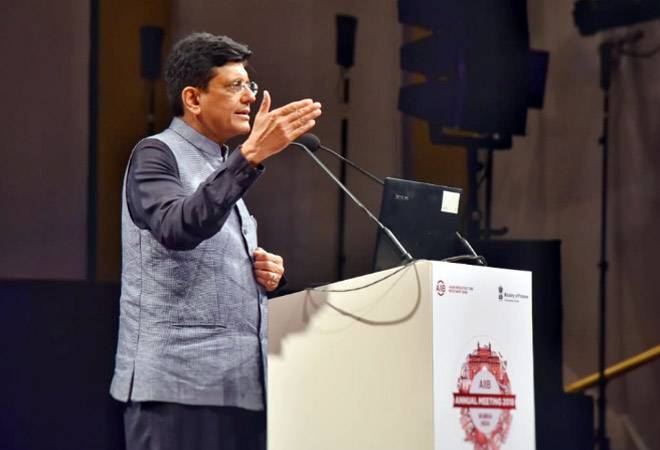 Union Railways Minister Piyush Goyal Saturday said the government was eyeing investment of Rs 50 lakh crore in railways by the year 2030 to make it the best in the world.

The minister also said that the rail infrastructure in the country increased by mere 30 per cent in the last 65 years due to the lack of adequate investment.

"The government envisages investment of Rs 50 lakh crore by the year 2030 in Railways to make it the world's best railway which will include safety of passengers, expansion of network, and increase in freight share," Goyal said while commenting on the Union Budget which was presented in Parliament on Friday.

"In the last 65 years, the investment had been less in Railways due to which the infrastructure increased by 30 per cent while freight and passenger traffic increased by 1500 per cent," the minister said, adding that these factors resulted in passengers facing several problems.

He was speaking to reporters on the sidelines of launching of a membership drive for the BJP here.

Goyal announced that the entire Konkan Railway Corporation (KRCL) route from Mumbai to Mangalore via Goa would be electrified in the next one and half years.

Electrification work has been undertaken by the Ministry of Railways at the cost of Rs 11,000 crore, which has been sanctioned.

"Running the entire route on electricity will save the environment and increase speed. Besides, trains will run on clean fuel," he said.

The minister also said that different measures are being initiated to increase the capacity of the KRCL without going for doubling of the tracks.

Goyal said the proposals are also being worked to have extra links to the KRCL lines.

The minister further said that during the last five years, the Modi-led government has launched nine new trains on the KRCL route from different destinations including Mumbai.

After launching of the railway with a vista dom coach on the KRCL route, Goyal said the ministry has ordered 100 vista doms coaches.

"I am of the view that each train on Goa route should have vista dom coaches so that passengers can enjoy the beauty of nature," he said.

Goyal said his ministry will have capital investment of Rs 1.60 lakh crore for the current year which is against mere Rs 45,000 crore invested during 2013-14.

He also said the mining issue in Goa will have to be resolved within the ambit of law in the wake of the last year's supreme court verdict which halted mining operations in the coastal state.

"We are committed to solving the mining issue. The chief minister had held several meetings with our leadership in Delhi. He had also met the prime minister several times on this issue," Goyal told reporters in the presence of the chief minister.

"It is a very difficult issue which has to be resolved within the framework of the law and yet recognising the special situation in Goa," he said.

Goyal further said the legal department of Goa and the Law ministry in Delhi are working together to find a solution keeping in mind the SC verdict that all natural resources of this country should be auctioned.

"This (order to auction) was in the wake of the massive coal scam that the Congress and the UPA were indulged in when they had allotted a large number of mines to select parties. But, Goa has a very peculiar situation where mining has been going on for several years. These are not new mines.

Has Union Budget 2019 laid the foundation for New India?