Google has announced the rollout of the first-ever Beta version of Android 12 for Pixel and other devices. Here is what the new Android OS promises to bring to its users. 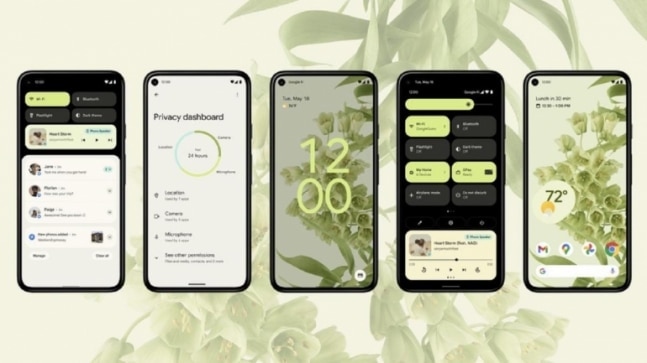 Google IO 2021 has started and Google has already announced a string of updates for several of its services. The most anticipated of these were the updates on the next version of Google Android. At the first note of the IO event, Google has now given us a hint at what to expect from Android 12 with the release of its first-ever Beta version.

Announcing the first beta of Android 12, Google hinted at some of the features that will be available on Android smartphones in future OS updates. These will include more personalisation options for the users, simplified interactions, improved accessibility features and more privacy features.

Android 12 Beta will be available on Pixel and other devices including those from OnePlus and Xiaomi starting today. Here are the changes that we can expect on the same -

Google says that Android 12 includes "the biggest design change in Android's history." This was made possible as the company rethought the entire experience, "from the colours to the shapes, light and motion."

With Android 12, users will be able to completely personalize their phones with a custom colour palette and redesigned widgets. Using colour extraction, the system will automatically determine dominant colours on the user's set wallpaper and suggest the colour palette accordingly.

These colours will then be applied to the entire OS, including the notification shade, the lock screen, the volume controls, new widgets and more.

Google is bringing these design changes through a collaboration between its software, hardware and Material Design teams. The project unifies its software and hardware ecosystems under a single design language called Material You.

Google has worked on the motion and animations on the Android 12 to bring about a more fluid experience to its users. These changes will be experienced across tap, swipe and scroll, like when users dismiss their notifications on the lock screen, the clock will appear larger to indicate that they are all caught up.

On Android 12, Google has also reimagined important spaces on a phone, like notification shade, quick settings and the power button to help users get things done easily.

The notification shade, for instance, is more intuitive and playful, with a crisp, at-a-glance view of app notifications. Similarly, Quick Settings will let users control practically the entire operating system with a swipe and a tap. These settings will now also include Google Pay and Home Controls.

Android 12 will also have the ability to summon Google Assistant with a long-press on the power button.

Android 12 will also make devices faster and more responsive with better power efficiency. Google says that users will be able to use their Android 12 devices for longer without a charge than was possible in the previous Android smartphones.

Google achieved this by some under-the-hood improvements including reducing the CPU time needed for core system services by up to 22 per cent and reducing the use of big cores by the system server by up to 15 per cent.

Android 12 includes new features to give users more transparency around which apps are accessing their data, and more controls over this data collection. A new Privacy Dashboard, for instance, will offer a single view into permissions settings as well as what data is being accessed, how often and by which apps. Users will also be able to easily revoke app permissions from the dashboard.

A new indicator to the top right of the status bar will tell users when apps are accessing their microphone or camera. Two new toggles in Quick Settings will also help remove app access to these sensors for the entire system.

Also read: | Google IO: LaMDA is the perfect example of how Google is cracking natural conversations but it is just a start