The new design gives a separate space to stories that are yet to viewed and that have been viewed. 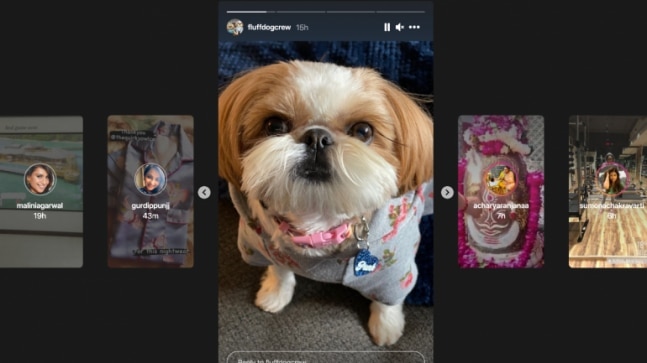 Instagram has finally rolled out the new design for Stories on the web. The photo-sharing app has been rumored to be working on the new layout for quite some time aIn the new design, the stories appear in a carousel and not like a single tile.

The new design gives a separate space to stories that are yet to viewed and that have been viewed. You can tap on the previous image and the image that is yet to be viewed. In the previous design, the previous story and the next story did not appear on the same screen. The picture appeared in a single tile. But the new layout looks good and it is also easier to navigate through stories. The new layout displays up to five Stories at once on the web version of the app.

The new layout is being rolled out to Windows and Mac users. The carousel of stories has started appearing for us. You would also find pause/ play and volume mute buttons on the Story that is being played. You can pause the story using the button to take a screenshot or share it with any of your contacts. This pause and feature play is not available in the mobile version of the app. This has only been rolled out for web users. Apart from that, you can also reply directly to the Stories from your computer just like you do from your smartphone. You can also view your stories without turning on the sound.

Talking about the feature, a spokesperson from Instagram had informed Engadget that the feature is being tested and it has begun appearing to a "small group" of Instagram users. However, it seems like the feature has been rolled out to a larger audience.

On a related now, Google is now working feature that would show short videos from TikTok, Instagram, and display it on the search results.

As per a TechCrunch report, Google has confirmed working on a feature like this. The spokesperson had told the publication that Google is testing the feature on mobiles now. The feature is in its early stages on the Google app and the website on mobiles. This means that the video carousel would not appear on your search results as of now but as Google rolls out the feature it would surface top video content from TikTok and Instagram.
Now, Google already has Google Stories but the report states that the "Short Videos" carousel is entirely different.
The report reveals that once you click on the videos in the short video carousel, you will be taken to the web version of Instagram or TikTok. It will not open the apps of the social media platforms, even if you have them installed in your devices. The feature was spotted by one of the Twitter users, who also shared a screenshot of the feature. Twitter user Saad AK, was among the few people, who got a glimpse of the feature. He mentioned that he looked for the word "Biryani" and video results from YouTube also appeared on Google Search. However, he mentioned that the video results do not appear for every search.