LG Wing is scheduled to launch on September 14 but it might release into the home market initially. 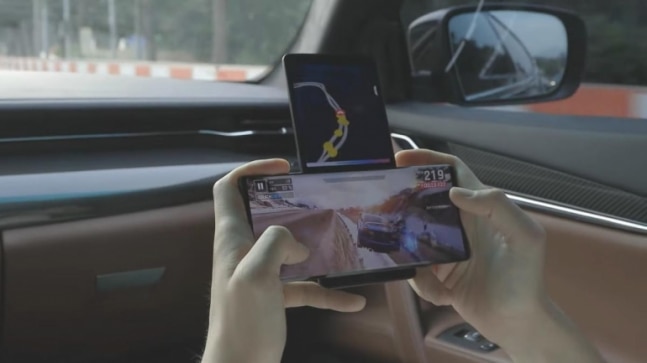 LG has confirmed its first product under the Explorer Project is going to be Wing (or The Wing). It is the same ambitious device that has leaked in videos so far, doing all sorts of stunts with its dual screens. The LG Wing is coming out on September 14 in Korea but that seems too far when you look at what the rumour mill has to offer. A new video has leaked that does perhaps the complete coverage of the LG Wing and offers a peek at the abilities of those two screens that form the device's T-shape.

The video comes straight from the LG land, South Korea where the Wing is expected to be available initially. The video shows LG Wing rotate in various angles, thanks to the hinge between the two screens. The details of this hinge or whatever accessory LG has used are likely to be detailed at the launch event. What we have for now is hands-on footage of the LG Wing.

The first thing that you will notice is how tall the LG Wing is. It has been at the back of my mind that LG Wing is going to be a compact device but maybe LG is not going ultra-portable. The LG Wing has a slim footprint too, despite having two screens. I think this is something that LG should definitely brag about because otherwise, any device built on the foldable display or dual display concept has a relatively higher thickness (for example, the Samsung Galaxy Fold).

The interface of the smartphone is optimised to adapt to dual displays. It is not something that Google provided. LG has gone ahead to tweak its software for that, much like how other OEMs have to allow their foldable devices to function properly. Right now the details about this interface are very scarce. I am not sure what all apps have actually considered LG Wing's swivel mechanism to optimise their apps to fit the displays. A lot of developers had prepared for the foldable displays, so I am hoping LG was able to convince them for the Wing, as well.

The T-shaped displays have been seen supporting some nifty functionalities in previous videos. While the primary display runs navigation, the second one shows tools such as the music player or call options. Another instance was when the primary display was engaged in gaming, the secondary one was assisting with navigation. Of course, it would require a good amount of power to run two displays and their functionalities. For that, LG Wing might have a Snapdragon 765G processor, per some reports.

LG Wing is going to be the odd one out in a pool of foldable devices and I am quite excited for it. I am not sure what plans LG has for the Wing but really hope it arrives in India. The rumours have also said the LG Wing would cost about $1,000 (roughly Rs 74,000), which is a huge price for a device that runs a midrange processor but you will be paying for the novelty that LG Wing will have to offer.