Google CEO Sundar Pichai thanks co-founders for having confidence in him; says he was excited on being part of Alphabet 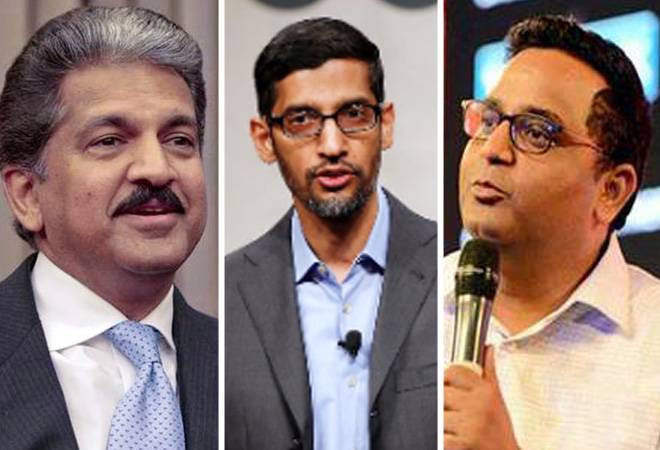 Sundar Pichai was appointed the chief executive of Google in 2015.

Mahindra and Mahindra Chairman Anand Mahindra and Paytm founder Vijay Shekhar Sharma congratulated Google CEO Sundar Pichai for his elevation as the head of the tech firm's parent company, Alphabet Inc. Mahindra quipped if India could monetise export of  CEOs, it would help the country's financials. "India's most robust export product is probably the 'Global CEO.' It's now a universal perception that Indian executives are leadership material. If only there was some way of monetising these 'exports,' India would have a perpetual balance of payments surplus!" he tweeted. 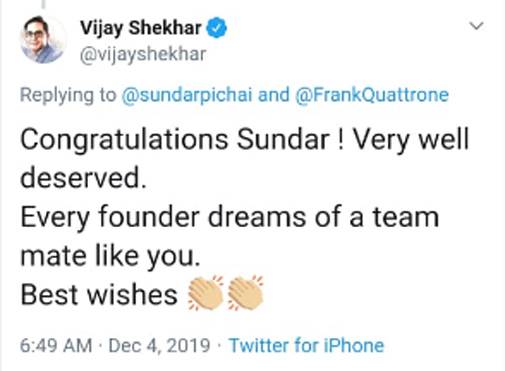 Famous cricket commentator Harsha Bhogle said he was delighted and proud to hear the announcement. "So @sundarpichai is now head of #Alphabet in addition to #Google. What a career. Delighted and proud. What peak is there now to climb!" he tweeted.

So @sundarpichai is now head of #Alphabet in addition to #Google. What a career. Delighted and proud. What peak is there now to climb!

From the garage to today, thank you for your leadership and vision these last 21 years Larry and Sergey. And congrats @SundarPichai! https://t.co/YqvbLQfpvbpic.twitter.com/jeCb4qpLUg

After he was named CEO of Alphabet Inc, Google CEO Sundar Pichai thanked co-founders for having confidence in him. Pichai said he was excited on being part of Alphabet.

Earlier, Google announced that Page and Brin were stepping down as CEO and president, respectively, of Alphabet. It announced to promote Pichai for the bigger role, a job that makes him one of the the most powerful corporate leaders in the tech world.

"I'm excited about the Alphabet's long term focus on tackling big challenges through technology. Thanks to Larry & Sergey, we have a timeless mission, enduring values and a culture of collaboration & exploration - a strong foundation we'll continue to build on," Sundar Pichai tweeted.

The 47-year-old was appointed the chief executive of Google in 2015. He has been with the company for the past 15 years. His rise to fame in Google happened during the development of its Chrome browser.

Sundar Pichai is assuming the leadership role Alphabet at a time when Google is facing mounting scrutiny over its size, data privacy practices and potential impact on society.

The two Google co-founders in a public letter said with Alphabet now well-established, and Google and 'Other Bets' operating effectively as independent companies, it's the natural time to simplify the company's management structure.

"We've never been ones to hold on to management roles when we think there's a better way to run the company," they said. "And Alphabet and Google no longer need two CEOs and a President. Going forward, Sundar will be the CEO of both Google and Alphabet. He will be the executive responsible and accountable for leading Google, and managing Alphabet's investment in our portfolio of Other Bets," said Page and Brin.

The co-founders will continue to serve on Alphabet's board of directors. Pichai was born in Madurai, Tamil Nadu. He is an alumnus of Wharton Business School, Stanford University, and Indian Institute of Technology, Kharagpur.