Flipkart is offering an end-to-end Gujarati experience using a judicious mix of translation and transliteration of over 5.4 million words on the platform to bring a natural language experience 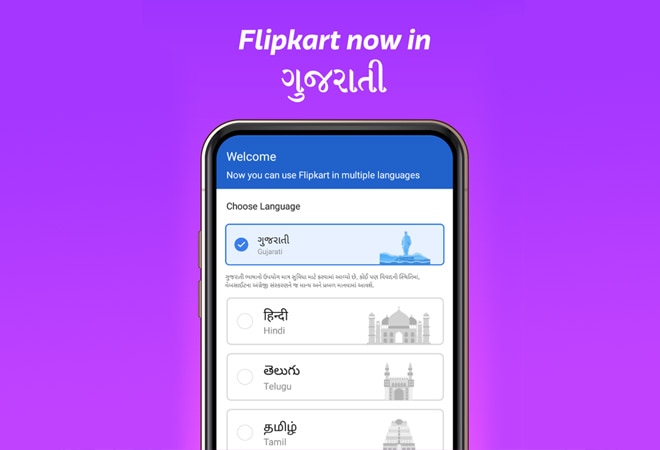 In line with its aim of leveraging locally developed language solutions to help bring the next 200 million customers on board, Flipkart has added Gujrati language support to its app. For this, over 5.4 million words have been translated to enable Gujarati language experience. Over the last 1.5 years, the Flipkart app is now available in eight Indian languages, including Hindi, Tamil, Telugu, Kannada, Marathi, Bengali and Odia.

Gujarati is closely linked to the previously introduced Hindi language support as both the languages are derived from Devanagari script and have several similarities. This led to a faster scale up of the language based on the learnings from Hindi and helped in bringing a natural experience.

Flipkart is offering an end-to-end Gujarati experience using a judicious mix of translation and transliteration of over 5.4 million words on the platform to bring a natural language experience. This includes transliteration of terms such as EMI, delivery, filter, cart and OTP instead of simply translating them to enable better resonance with the native experience, helping users get acquainted with e-commerce terminologies.

"We're excited to introduce Gujarati on our platform. As a homegrown e-commerce marketplace, Flipkart is committed to bring state-of-the-art solutions to democratise commerce in India using locally developed technology & innovations and reach millions of underserved customers across the country. In a little over 1.5 years, Flipkart has expanded its vernacular universe to eight languages covering 80% of the official languages spoken across the country. With Gujarati, we are further doubling down on our efforts in bringing a natural language experience to millions of our users and creating a shared value for millions of our customers, sellers, artisans and ecosystem partners across the country," says Rajneesh Kumar, Chief Corporate Affairs Officer at Flipkart.

"As a country with thousands of languages spoken across the country, it is interesting to witness the digital world increasingly adopting Indian languages, thereby making it easier for more people to become digital natives. The introduction of Gujarati language support on the Flipkart app is a great initiative and will support millions of Gujarati speaking citizens from the state and across the country in having a frictionless e-commerce experience. This will also create an even bigger market for MSMEs & local businesses. This also ties in to our Prime Minister's clarion call of 'Vocal for Local' and will play a pivotal role in bringing millions of citizens on the digital world map," says M K Das, Additional Chief Secretary to Chief Minister, Industries & Mines,  Government of Gujarat.

According to 'KPMG-Google Indian Languages - Defining India's Internet' report, Indian language internet users are expected to account for nearly 75% of India's internet user base by 2021. This growing base of language users, primarily from smaller towns, makes it extremely important to enable e-commerce in regional languages to offer a more personalised experience. Additionally, Flipkart usage trends states that over 95% of the customers who opted for a vernacular language experience continued with the same.