Smartphone sales down globally: Sales of iPhones continued to decline year over year, although at a lesser rate compared with Q1 of 2019. 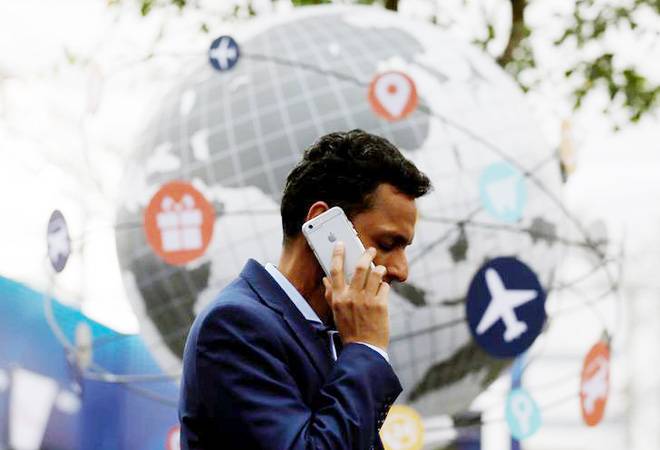 Global sales of smartphones to end-users declined 1.7 per cent in the Q2 of 2019, totalling 368 million units, according to Gartner. India sold 35.7 million smartphones, achieving a 9.7 per cent market share in the quarter. Sales in India showed a 2.3 per cent decline year over year, however, mainly due to slowing consumer upgrades from feature phones to smartphones.

The top five smartphone vendors worldwide include Samsung, Huawei, Apple, Xiaomi and Oppo. Of these, Huawei and Samsung exhibited the strongest annual increases in sales in Q2 at 16.5 per cent and 3.8 per cent, respectively. As a result, both grew market share in the quarter, which led them to account for more than a third of total smartphone sales globally.

Samsung smartphone sales grew after six consecutive quarterly declines. Samsung sold over 75 million smartphones in the second quarter of 2019 and grew its share by 1.1 percentage points year over year. "Strong demand for Samsung's new Galaxy A series smartphones and the revamp of its entire entry-level and mid-range smartphone range helped this positive performance," adds Gupta. "Demand for Samsung's flagship Galaxy S10 started to weaken during the quarter, however, indicating that achieving growth in 2019 as a whole will be a challenge." 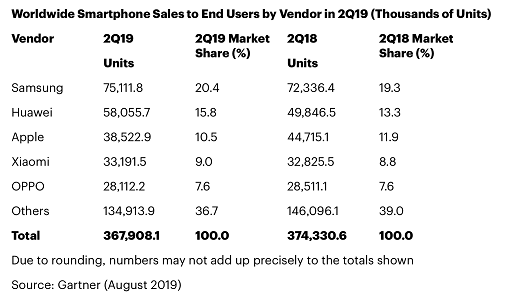 The Huawei ban announcement led to a sharp decline in its smartphone sales during the period. However, sales did improve slightly on the ban's deferment. While its smartphone sales total was weaker globally, strong promotion and brand positioning helped Huawei sell a record number of smartphones in Greater China in the quarter, growing 31 per cent in the region.

Sales of iPhones continued to decline year over year, although at a lesser rate compared with Q1 of 2019. Apple sold just over 38 million iPhones in the second quarter, a 13.8 per cent decline year over year. "Too few incremental benefits are preventing existing iPhone users from replacing their smartphones. Apple has reached an inflection point marked by shifting its business toward services, which represented 21 per cent of the vendor's total revenue in the first quarter of 2019" avers Gupta.

Gartner says global smartphone sales will remain weak for the rest of the year too. Worldwide sales of smartphones to end-users will total 1.5 billion units in 2019, a 2.5 per cent decline year over year. However, Gartner analysts expect smartphone sales to grow again in 2020, driven by the broader availability of 5G models and the promotion of 5G service packages across the world by communications service providers (CSPs). Analysts also expect the first 5G Apple iPhone to launch in 2020, which should entice iPhone users to upgrade.

Also read: Xiaomi Redmi K30 is out of the bag, to support 5G connectivity