News
TECHNOLOGY
News
WhatsApp launches Communities: What is it and how does it work?

WhatsApp launches Communities: What is it and how does it work?

WhatsApp Communities helps put similar interest groups together wherein users can create a Community on WhatsApp by adding groups that can be clubbed under a similar theme.

WhatsApp has announced that it is going to roll out Communities on its platform. WhatsApp Communities is essentially a feature that will group together similar interest groups - thus, it is a collection of groups.

Users can create a Community on WhatsApp by adding groups that can be clubbed under a similar theme.

These creators then become community admins who can manage the groups within the Communities and send messages to all groups at the same time.

This allows individual conversations within any group to continue while announcements that pertain to all groups can keep coming in. All the chats and messages within Communities will support end-to-end encryption as it applies across the platform.

WhatsApp has said that it is not going to add a feature that will allow these communities to be searched or discovered unlike what happens on other apps.

The platform is also reducing the ability to forward messages from the current limit of five messages to just one. This will help clamp down on the spread of misinformation within the Community groups.

Additionally, WhatsApp is also going to ban individual Community members, admins, and also disband a Community if it is flagged for being illegal, violent, or propagating hateful activities.

The company is also introducing improvements to how individual groups work whether they are a part of a community or otherwise. 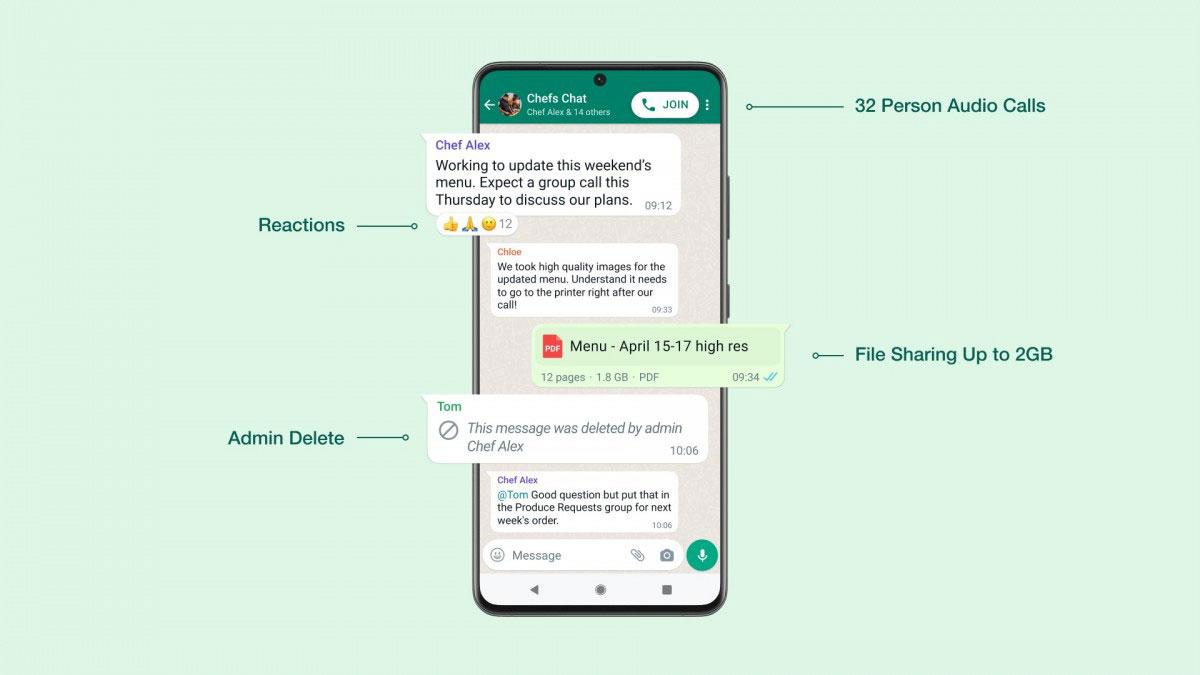 Group chats are going to get emoji reactions for messages and soon group chat participants will be able to react to a message without sending separate emoji messages.

Admins will also be able to delete messages within a group and they will also disappear from other users’ devices as well.

Besides this, file sharing on the platform has been upgraded to support files up to 2GB in size and one-tap voice calling will support 32 members going forward.

All these new features will be rolled out gradually over the next few weeks starting with a bunch of select users first and then to all others.

Also Read: WhatsApp Pay will now be available to 100 million users in India

Also Read: WhatsApp is rolling out a new ETA feature for beta users