Oppo is gearing up to launch the Find X3 series soon and it might include the Reno 5 5G with the new name of Find X3 Lite. 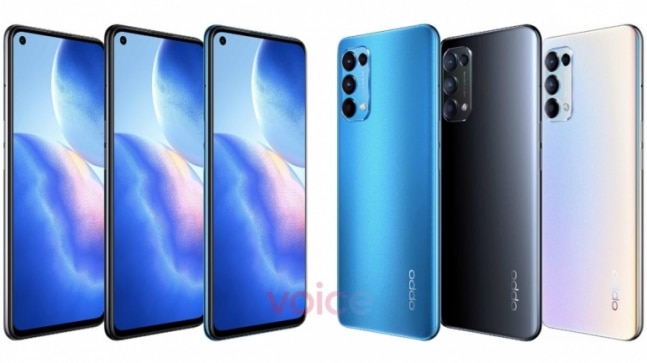 Oppo is readying its next flagship series, the Find X3 for launch in a few weeks. This is going to be another significant step in Oppo's smartphone journey, which is why the company is following what it has so far. In addition to the two smartphones in the series, the Find X3 and Find X3 Pro, Oppo is also expected to launch the Find X3 Lite. But unsurprisingly, this smartphone may not be new. According to Evan Blass, the Oppo Find X3 Lite is nothing but a rebranded Reno 5 5G smartphone that was launched in China last month.

It makes sense on Oppo's part. Oppo is going to launch the Reno 5 series in global markets with a multitude of variations. This means there are the 4G variants of the series, as well as the rebranding. Oppo has confirmed launching the Reno 5 Pro 5G in India as the first 5G smartphone in the Reno series. But it is not clear if the Reno 5 5G will debut as well. I am assuming it will, only because the Reno 4 series launched with both vanilla and 'Pro' versions in India last year. But going by what Blass has said, the Reno 5 5G will not launch with its true identity and take the name of the Find X3 Lite.

The Oppo Find X3 Lite might launch in early March but it is unlikely to go on sale towards the beginning of April, according to Blass. He also said there is a Find X3 Neo in the series but its specifications are not clear at the moment.

Oppo has packed the Reno 5 5G with a 6.43-inch 1080p OLED display with up to 90Hz refresh rate. There is a punch-hole on the top left of the phone housing a 32MP selfie camera. The smartphone is powered by an octa-core Qualcomm Snapdragon 765G processor, bringing 5G support to the device. There is up to 12GB of RAM and 256GB of storage. The fingerprint sensor is embedded under the display. The smartphone runs Android 11-based ColorOS 11.

For photography, the Oppo Reno 5 Pro comes with a 64MP main camera with F1.7 aperture and 6P lens, an 8MP ultrawide camera, a 2MP macro camera, and a 2MP black-and-white camera for depth-sensing. The cameras support 4K video recording but when UltraSteady mode is on, the resolution is capped at 1080p. The smartphone has a 4300mAh battery under the hood, along with 65W fast charging support. There is a USB-C port on the bottom for charging and data transfer.