Redmi Note 10 as good as iPhone 12 Pro? Xiaomi makes big claims ahead of its launch

Xiaomi has announced that the Redmi Note 10 series will launch in India on March 4 and has been aggressively promoting the upcoming smartphones. 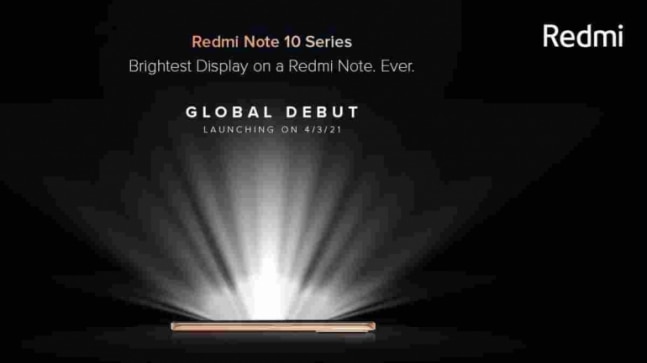 Xiaomi India MD Manu Kumar Jain on Friday tweeted that the Redmi Note 10 series’ display will be as bright as the Apple iPhone 12 Pro.

"Not just bright, but the brightest display EVER on a #RedmiNote! As bright as _ _ 12 Pro! Any guesses? #RedmiNote10 series is launching in 4/3/21!" Jain tweeted. The Redmi Note 10 series and Xiaomi deserves all the credit for democratising smartphones in India. The company has brought several high-end features to more affordable categories and that's one of the reasons behind the success of the Note series.

Even then, to believe that Xiaomi can come up with a display on the Note 10 series which is as good as the iPhones, is tough. A lot of users took to Twitter to guess what Jain may mean. Some of them guessed that the Note 10 series can come with a brightness of 800 nits or the peak brightness might be 1200 nits which would be the highest on a Note series smartphone.

Last year's Apple iPhone 12 Pro had 800 nits of typical brightness and 1200 nits of peak brightness. Apple has always been known for making gorgeous displays and iPhones features some of the best in the market.

Given that last year's Redmi Note 9 Pro had a peak brightness of 450 nits, to match Apple's numbers would be a huge upgrade from Xiaomi. The smartphone maker might also need an AMOLED display to achieve that level of brightness. However, it has hinted in the past that the Note 10 series can come with a LCD display.

Xiaomi had put out a poll last week where it had asked the fans to choose between an LCD display with 120Hz refresh rate and an AMOLED display. As the latter got more votes, the tweet was deleted. It will be interesting to see what Xiaomi can achieve with the Note 10 series and how close can it come to the iPhone 12 Pro in terms of display quality.

Most features of the smartphone series are still under wraps but the official listing has spilled few beans. Both the Redmi Note 10 smartphones will feature a hole-punch display with really thin bezels, at least on the sides. The listing also confirms that the smartphones will come with certification for high resolution audio. There's also a mention of better haptic and Corning Gorilla Glass layer on the front.

The smartphone is confirmed to pack a bigger battery than the Redmi Note 9 series. This hints at the possibility of a 6000mAh battery with fast charging support. Apart from the confirmed features, the Redmi Note 10 series might be powered by Qualcomm Snapdragon 732G SoC. The phone is tipped to come in two models: 4GB+64GB and 6GB+64GB storage variants.