To make the Air 20% thinner, Apple shrunk just about every layer: the front glass, the touch sensor, the display, the battery and the back. 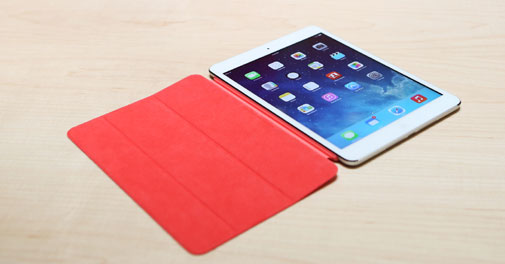 When Apple came out with a smaller iPad last year, the original version suddenly seemed heavy and bulky. The iPad Mini fit more easily in pockets and bags, and it felt more comfortable in my hands. It was also cheaper than the full-size version.

The release of the new iPad Air, along with a price increase for a new Mini model, narrows those distinctions.

At just 1 pound, the Air is 28 per cent lighter than last fall's full-size model and just a quarter pound heavier than the new Mini coming out in a few weeks. The size of the screen is the same as last year, at 9.7 inches diagonally, but Apple managed to shave the iPad's frame so that the tablet is narrower by nearly three-quarters of an inch when held vertically. Overall volume is reduced by 24 per cent. The starting price remains at $499.

Apple says it has been working on this engineering feat on the side for years, even as it released bulkier models. To make the Air 20 per cent thinner, Apple shrunk just about every layer: the front glass, the touch sensor, the display, the battery and the aluminum back. Apple says it kept the device durable without unnecessary materials.

It's not until you hold the old and the new side by side that you feel and appreciate the difference.

In the week I've had with the Air, I've managed to stuff it partially into the pocket of my autumn jacket, whereas the old one wouldn't fit at all. I carried it in a backpack on a five-mile run home from work and forgot it was even there after less than a mile. I curled up with it in bed to watch this week's episode of "Revenge" instead of getting up for work.

Besides making the Air smaller and lighter, Apple packed it with more power:

- The Air shares the A7 processing chip found in the new iPhone 5S. Apple says it's twice as fast as last fall's model. The Air also comes with a companion M7 processor, which improves battery life for motion-related sensor data. The A7 processor uses a 64-bit system similar to desktops, which is mumbo-jumbo for saying that it handles large amounts of data more efficiently. This makes the Air great for games and other data-intensive apps once they are adapted to take advantage of the new chip. Only a few are right now.

- Two Wi-Fi antennas work to deliver up to twice the speed. I downloaded the pilot episode of the "Pretty Little Liars" spinoff "Ravenswood" in less than 20 minutes. It took last fall's model 39 minutes to do the same.

- The Air adds a microphone on the back, while keeping the one on top. When recording video in a noisy room, I get better sound from the subjects and less ambient noise. There's a second stereo grill, too, for better sound balance when held vertically, though sound still comes from one side in horizontal mode.

- Cellular versions, offered for $130 more, work with a greater number of 4G LTE frequency bands. There's now a universal model, rather than two different ones before. That means you can switch U.S. carriers and use it around the world more easily.

There is a 24 per cent reduction in battery capacity to get the iPad slimmer, but Apple says it's able to keep battery life the same at about 10 hours for Wi-Fi Web surfing. That's because the A7 is more efficient at using power. In my tests, I actually got more out of the Air: 14 hours of iTunes video, compared with 12 hours on last fall's model.

I was disappointed, though, that the Air doesn't go even further. I would have wanted to see a fingerprint sensor for unlocking the device, similar to what's in the iPhone 5S. The Air also doesn't have the 5S's improved rear camera or the various 5S camera features that take advantage of the speedy A7 chip. That includes the ability to shoot slow-motion video and take up to 10 photos per second.

I didn't get to spend as much time with the new Mini, but I can say this: The new display is gorgeous. Text appears the way it would on paper, not dull and fuzzy as can be the case on lower-resolution screens. The new Mini sports four times the number of pixels as last year's Mini and shares many of the Air's improvements, including the A7 and M7 processors, the dual Wi-Fi antennas and the two microphones. The Mini's size remains at 7.9 inches.

You do pay more for an iPad than most of its rivals, but you get better app selection, ease of use and, with the new Air, an elegant design.