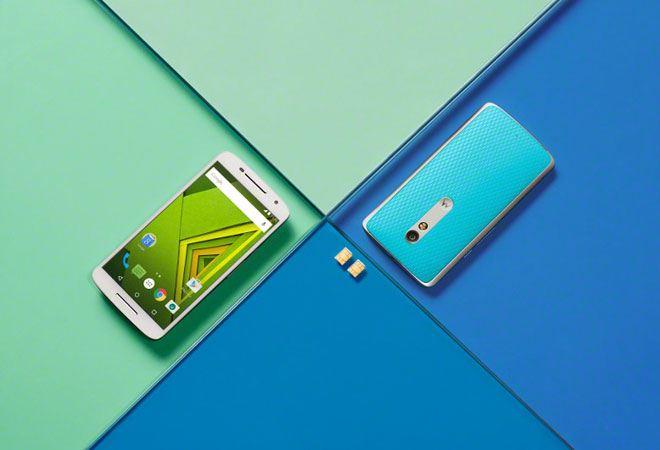 Last year, Motorola re-entered the Indian market with a different strategy altogether. It priced its smartphones aggressively and overlooking offline retail, it tied up with Flipkart for its online-only strategy. But feeling the heat from the Chinese players, Motorola has now launched the Moto X Play in India for Rs 18,499. With the sturdy hardware, improved camera and stock Android UI, is the Moto X Play the best smartphone under Rs 20,000?

Design:
Continuing with the Moto X design language, the Moto X Play has a slightly curved rear with a dimple with the Motorola logo in the middle. The front is dominated with a 5.5-inch 1080p display and speaker cut-outs above and below the display. There is a metallic looking plastic running around the edges with two buttons on the right - power and volume rocker.

The smartphone has a removable textured back, yet the combine SIM slot and memory card slot sits on the top edge. The battery is non-removable.

Motorola has made the Moto X Play a water-resistant, and not waterproof, smartphone. This means, it will survive water drops or a splash but not if dropped in the toilet. Overall, the Moto X Play looks simple and elegant.

You have a neat stock Andorid UI that is easy to navigate. During the five days of testing, I did experience a lag of a second while switching between the multiple apps. But the smartphone didn't freeze even once.

Downloading apps and browsing over the web is smooth. There wasn't any lag while playing games such as Temple Run and Asphalt racing. However, the device did heat up a bit while auto-updating the apps. On Quadrant Standard benchmark, the Moto X Play scored 23,669.

You also get a few handy apps as part of the smartphone - Moto Assist, Moto Migrate and Moto Voice. Notification icons appear on the locked screen too. My review unit had an internal memory of 25.45GB, of which 21.71 GB was user accessible. The Moto X Play also supports expandable memory card of up to 128GB. The voice clarity and the loudspeaker clarity on the Moto X Play was great.

Camera:
Motorola seemed to have worked on the camera bit by adding a 21MP camera to this smartphone. And it's not just the megapixel count but the software, too, has simple tweaks that help in capturing good images.

A camera app launches quickly and tap on the screen captures the image fast enough. Touch to focus doesn't work here as Motorola has opted for 'touch to capture'. Other than the HDR mode, there is a control focus and exposure mode, too, for capturing creative shots. The latter is easy to use and master by just moving the finger around the circle to adjust the setting. Dragging the circle over the screen can be used for focusing on a subject.  There is a 5MP front-facing camera for capturing selfies.

The images captured using the Moto X Play are impressive as it offers bright rich colours. Low-light imaging isn't Moto X Play's forte though and images have lot of noise. The device does not support 4k video capture even though the feature is becoming a norm.

Monster Battery:
Motorola has added a huge 3630mAh battery to the Moto X Play, which the company claims can go over 30 hours on a single charge. Surprisingly, the battery lives up to the company's claims as the new smartphone lasted me over a day and a half on full charge over WiFi, with continuous push email, Whatsapp, Facebook, Twitter, web browsing and a few minutes of camera usage.

BAG IT OR JUNK IT:
Fills in the gap between the Moto G and the yet to be launched Moto X Style. Slightly overpriced in comparison to the competition but the Moto X Play is a good performer with a great camera and lasting battery life.