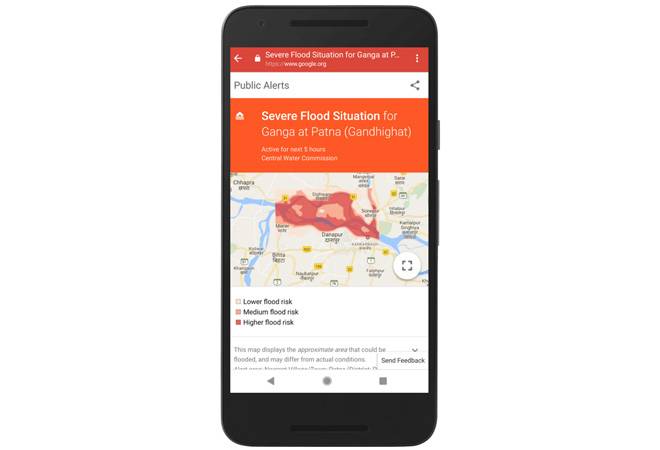 Google Maps isn't just your usual mapping service. It already offers satellite imagery, aerial photography, street maps, real-time traffic conditions and route planning. The mapping service has now improved its SOS alerts and will soon roll out crisis forecast visualisation in several Indian cities starting Patna and then expand it to the Ganges and Brahmaputra regions. With the help of the updated crisis alert system, Google maps can warn and direct users to move out of the city safely and quickly.

The new update in Google Maps can be of great help in India which regularly suffers due to the floods and is home to over 20 percent of global flood-related fatalities. With the help of the Maps, you'll be able to get flood forecasts and see the areas where flooding is likely to occur, in addition to its severity.

The SOS feature was initially announced two years ago and was used to display crisis information, news bits, related social media posts and emergency numbers. Users will be now be shown detailed visualisations about hurricanes, earthquakes, and floods and also the information related to the crisis, helping them to plan the evacuation process. The navigation warning features will come to the Google Maps in the next few months on both iOS and Android platforms.

"In the days leading up to a hurricane, you'll see a crisis notification card on Google Maps that automatically appears if you're near the impacted area," Hannah Stulberg, Product Manager of Google Maps, explains. "This card will direct you to a hurricane forecast cone, which shows the prediction of the storm's trajectory along with information about what time it's likely to hit certain areas, so you can use this information to plan how to react."

Google Maps will also display crisis card for earthquakes, floods etc. Following the earthquake, the Maps will display the shake-map showcasing the epicentre, magnitude and affected surrounding. Hurricane forecast and earthquake shakemaps will start rolling out in the coming weeks on Android, iOS, desktop, and mobile web. Later this summer, users will see a prominent alert if their route is affected by crisis activity.