You broadband, subsidiary of Vodafone Idea launches new broadband and combo plans: All you need to know

You broadband has introduced new combo or bundled plans that come with a free Vi postpaid connection in Surat as of now. It has also introduced high-speed broadband plans with up to 350 Mbps speeds in Pune circle. 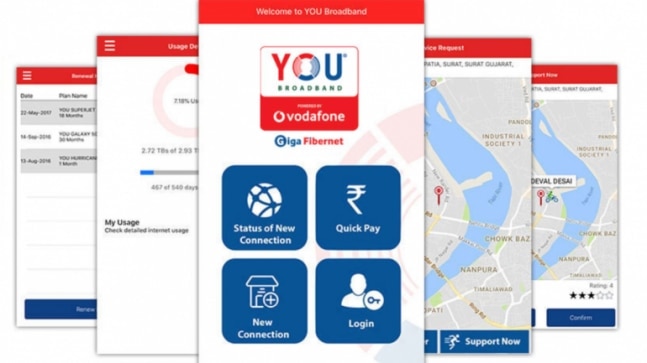 Vodafone Idea (Vi), earlier this week announced You broadband new plans that give unlimited internet with wired broadband connections and one Vi postpaid connection. An online report stated that the bundled plans come with a free Vi postpaid connection with unlimited data, unlimited voice, 100 SMSes per day and Amazon Prime subscription at no extra cost. According to the report, the ISP is bundling Vi's Rs 649 postpaid plan with these new YOU Broadband plans.

As of now, the bundled broadband plans are available only in Surat. However, You broadband is already giving broadband services in 22 circles with varying speeds and data. To check the plans available in your circle, you can visit the You broadband website https://youbroadband.in/ select circles under 'New Connection' section with your city, area and building society name. The company also plans to expand the bundled plans -- broadband as well as postpaid to the 22 cities where it has its presence. The combo or the bundled plans from You offer 10 Mbps, 100 Mbps and 200 Mbps speeds, with the prices starting at Rs 1500, Telecom Talk reported.

The 10 Mbps plan has only one subscription priced at Rs 1800 with 360 days validity.

ALSO READ: | Looking for broadband plans under Rs 1000? Consider these offers from Airtel, BSNL and Jio
ALSO READ: | iPhone 12 Mini with Rs 12,000 discount or iPhone 11: Old is gold in this case
ALSO READ: | FAU-G review: An incomplete, lacklustre game that is no PUBG rival