Under the IBC, loan defaulting companies are auctioned and successful bidder, called resolution applicant, takeover such firms after paying off an amount they had bid 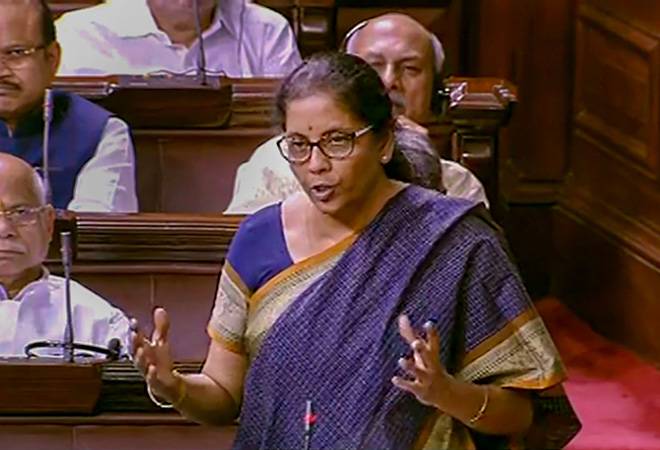 Extending indemnity to successful bidders of loan defaulting companies, Finance Minister Nirmala Sitharaman on Monday said the government will not launch any criminal proceedings against those who buy out a bankrupt company and no tax claim will be raised against them after implementation of a resolution plan.

Replying to the debate on a bill to amend the three-year-old Insolvency and Bankruptcy Code (IBC) in the Rajya Sabha, she said the government will implement in phases insolvency regulations for individuals including those who give personal guarantees for loans taken by defaulting companies.

The Insolvency and Bankruptcy Code (Amendment) Bill, 2019 makes it "binding on the government" that it will "not raise any further claim after resolution plan is approved," she said in her reply after which the House passed the legislation by a voice vote.

Under the IBC, loan defaulting companies are auctioned and successful bidder, called resolution applicant, takeover such firms after paying off an amount they had bid.

However, Sitharaman -- who is also the Corporate Affairs Minister -- said criminal matters will continue to be pursued against individuals of the loan defaulting companies.

The IBC, she said, gives that comfort for all new bidders and they "need not now be scared" over taxmen coming after them for the faults of the earlier promoters.

"Once the resolution plan is accepted, the earlier promoter will be dealt with as individual for their criminality but not the new bidder who is trying to restore the company," she said.

On individual insolvency, Sitharaman said the rules and regulations in respect of personal guarantors to corporate debtors are ready.

"We would be operationalising them soon," she said. "Two other categories, proprietors and partnership firms, which also come under the realm... and other individuals will be done in a phased manner but we are making provisions for all of them."

On Congress leader Jairam Ramesh's query regarding successful bidder not paying to take over the defaulting firm, she said: "The regulation introduced on January 24, 2019, requires performance security before approval by the adjudicating authority."

UK-based Liberty House was the highest bidder in several corporate insolvency cases including auto component maker Amtek Auto and Bhushan Power & Steel Ltd. It, however, did not furnish the required bank guarantee after getting the approval of the respective Committee of Creditors and NCLT, delaying the resolution plan.

In some cases, the resolution professional has sought permission to invite fresh bids and exclusion of the timeframe from the previously mandated 270-day resolution period.

Sitharaman said the IBC has an over-riding effect on other legislation.

The Amendments to the three-year-old Insolvency and Bankruptcy Code (IBC), provide clarity about preference to secured lenders over operational creditors and give lenders explicitly authority over distribution of proceeds of an auction of loan defaulting companies.

It gives committee of creditors of a loan defaulting company explicit authority over the distribution of proceeds in the resolution process and fixes firm timeline of 330 days for resolving cases referred to the IBC.

"The amendments were always brought in as a response to what was developing outside of Parliament where industries, creditors, courts, all of them were using the IBC to give solutions but there were greater, newer challenges which were coming up," she said.

She referred to the Essar Steel insolvency case where the lenders and operational creditors have been treated at par by the bankruptcy court for distribution of auction proceeds.

The National Company Law Appellate Tribunal (NCLAT) had recently ruled in the Essar Steel Ltd's case that the Committee of Creditors (CoC) had no role in the distribution of claims, and brought lenders (financial creditors) and vendors (operational creditors) on a par.

The government is amending IBC as "such very serious interpretative problems were coming," she said referring to the Essar Steel insolvency case.

The interpretation of the IBC by bankruptcy courts in treating secured creditors such as banks lending money to the company and operational creditors like suppliers at par "defeated the purpose and also the spirit of the Act," she said.

The amendment now equates distribution of amounts under a resolution plan with the manner it's allowed in case of liquidation, maintaining the hierarchy of lenders. The change will be retrospective, making it applicable for ongoing cases.

The minister said a total of 6,079 cases were disposed of even before admission in IBC, redressing Rs 2.84 lakh crore. As of June 30, 2,157 cases were admitted under Corporate Insolvency Resolution Process (CIRP), of which 117 have been resolved, realising Rs 1.24 lakh crore.

On hair cut being taken by lenders in insolvency cases, she said financial creditors have got 43 per cent of their claim but 108 per cent of the liquidation value.