Budget 2019: Coinciding with years of policy paralysis, EPU was the highest in 2011-12. It has secularly declined from July 2012 onwards, though with irregular episodes of elevated uncertainty in between Budget 2019: Economic policy uncertainty in India moved in tandem with global uncertainty until 2014, but started diverging since early-2015.

Union Budget 2019: Economic Policy Uncertainty (EPU) - when measured using EPU index in India - has reduced significantly over the last decade. Coinciding with years of policy paralysis, EPU was the highest in 2011-12. It has secularly declined from July 2012 onwards, though with irregular episodes of elevated uncertainty in between.

EPU also correlates strongly with the macroeconomic environment, business conditions and other economic variables that affect investment. An uptick in EPU increases the systematic risk, thereby the cost of capital in the economy. As a result, higher EPU lowers investment, especially because of the irreversibility of investment.

A globally recognised attempt at quantifying economic policy uncertainty is the one by Baker et al. (2016), who developed the index for various countries including India. It is created by quantifying newspaper coverage of policy-related economic uncertainty.

According to the Economic Survey, India's index of uncertainty peaked for few months in 2011 and 2012, reflecting the policy paralysis during that period. The economy witnessed twin deficits and high inflation during the same period.

The index was also high in the second half of 2013 when 'taper tantrum' happened, leading to volatile capital flows and depreciation of rupee against US dollar. The peak post the implementation of goods and services tax (GST) was not that sharp, primarily due to the fact that discussions around GST policy had kicked off much before the law eventually got implemented in July 2017. The EPU index shows that movements in India were almost similar to that of the US until 2015; however, the two series have diverged since then. Economic policy uncertainty in India has consistently been lower than that of US since then. The divergence has increased sharply since mid-2018, probably due to rising trade tensions of US with China, the Survey said. The low economic policy uncertainty index for India in last one year points towards resilience of the economy even in times of global trade uncertainty. 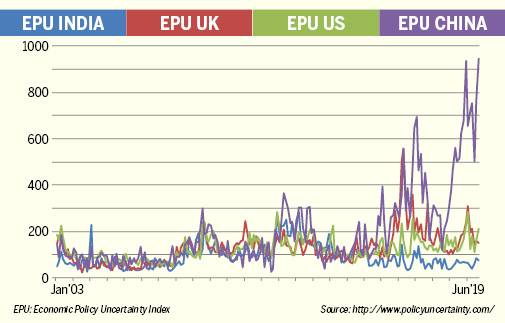 ALSO READ:CEA Subramanian makes a case for a radical drop in the cost of capital

Budget 2019: How to calculate income tax

Railways Budget 2019: Tough task ahead of balancing revenue and expenditure