Leakage happened around 2:30 am at LG Chem's polymers unit at RR Venkatapuram near Naiduthota, Gopalapatnam; gas is used in production of plastic 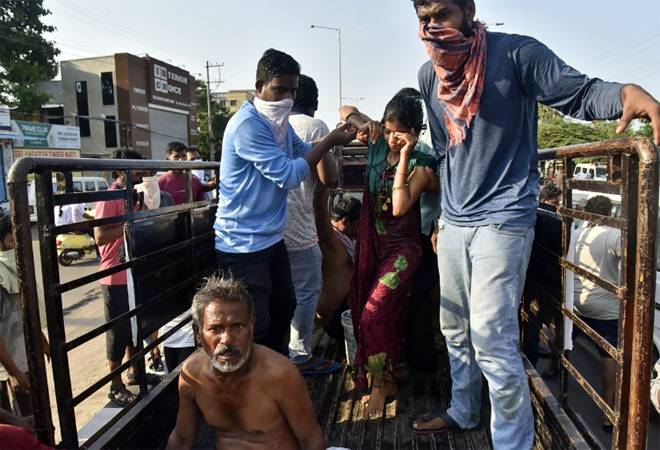 Several leaders and prominent people have expressed grief over the horrific gas leak incident at a polymer plant in Vizag, Vishakhapatnam. Total 11 persons are dead and 200 hospitalised after they suffered rashes and burning sensation in their eyes. Many people were even seen lying unconscious on road in the area.

Following the incident, PM Modi held talks with Ministry of Home Affairs and National Disaster Management Authority officials regarding the situation in Vishakhapatnam, which he said was being monitored closely. "I pray for everyone's safety and well-being in Vishakhapatnam," he tweeted. Home Minister Amit Shah said the incident was "disturbing", adding that the government was monitoring the situation constantly.

Congress leader Rahul Gandhi also expressed shock over the incident. "I urge our Congress workers & leaders in the area to provide all necessary support & assistance to those affected. My condolences to the families of those who have perished. I pray that those hospitalised make a speedy recovery," he tweeted.

President Ram Nath Kovind said he was "saddened by the news of gas leak in a plant near Vishakhapatnam". The Vice-President Venkaiah Naidu said he had spoken to Union Petroleum Minister Dharmendra Pradhan and Minister of State for Home Affairs G Kishan Reddy, who assured him that all kinds of assistance was being ensured to people.

State CM YS Jagan Mohan Reddy will soon meet victims at King George Hospital and other hospitals where the affected people are being treated. The Chief Minister's Office earlier said he was closely monitoring the situation and had instructed the district machinery to take immediate steps and provide all help.

Several Telugu film industry celebrities including Mahesh Babu and Chiranjeevi also expressed disbelief over the incident. "Heartwrenching to hear the news of Vizag gas leak, more so during these challenging times...," tweeted Babu.

Megastar Chiranjeevi requested authorities to take utmost care while opening industries post the lockdown. Actor Allu Arjun said the Vizag incident was "heart breaking"."I am deeply saddened by this horrific accident. Condolences to families who have lost their lives and hoping for a speedy recovery for the rest," he tweeted.

The leak impacted villages within a five-km radius. The leakage happened around 2:30 am at LG's Polymers unit at RR Venkatapuram near Naiduthota, Gopalapatnam. The gas is used in production of plastic. The factory is run by LG Chem.

The styrene gas can have serious effects on health and cause upper respiratory tract problems and irritation in eyes and skin. Exposure to styrene, also known as ethenylbenzene can also affect the central nervous system (CNS), causing headache, fatigue, weakness, and depression.