Ayodhya verdict: The Uttar Pradesh government has created temporary jails in every district while internet services may be banned in some places to check spread of rumours through social media 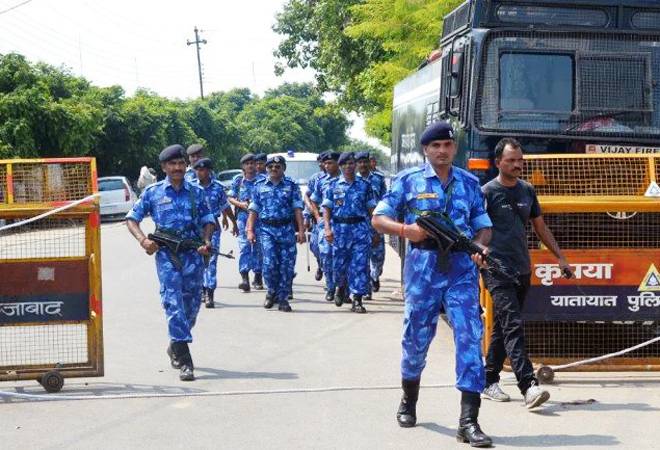 Ayodhya verdict: Elaborate arrangements have been drawn up in communally sensitive city of Ayodhya where the land dispute site is located

Authorities have taken detailed security measures ahead of the Supreme Court's (SC) landmark verdict on the Ayodhya case on Saturday. Elaborate arrangements have been drawn up in communally sensitive city of Ayodhya where the land dispute site is located. Delhi too has been converted into a fortress ahead of the SC's ruling on Ran Janmabhoomi-Babri Masjid title suit. Security across other cities too has been beefed as a precautionary measure to maintain law and order.

Authorities also said that social media posts will be monitored to ensure that no attempt is made to vitiate the atmosphere by spreading fake or inflammatory content and necessary arrangements have been made to ensure safety and security of religious places.

Uttar Pradesh- Chief Justice of India Ranjan Gogoi on Friday morning held an hour-long meeting with Uttar Pradesh Chief Secretary Rajendra Kumar Tiwari and Director General of Police Om Prakash Singh who apprised him about the security arrangements made to maintain law and order in the state.

The Uttar Pradesh government has created temporary jails in every district while internet services may be banned in some places to check spread of rumours through social media.

The state government also announced closure of all educational and training institutes till Monday after the Supreme Court website posted around 9 pm that the five-judge Constitution bench headed by Chief Justice Gogoi will pronounce its verdict in the case at 10.30 am on Saturday, a non-working day for courts.

Late Friday night, Prime Minister Modi said the Supreme Court verdict on Ayodhya will not be a matter of victory or loss for anyone.

Multi-layered security arrangements have been put in place in the temple town of Ayodhya, which has been turned into a fortress with deployment of 60 companies (90-125 personnel each) of the PAC and paramilitary forces. Drones and CCTV cameras were also being used to monitor the situation.

Be it the area near the Ramjanmabhoomi police station, "karyashala" of Ram Janmabhoomi Nyas or other parts of the town, policemen were diligently checking all vehicles.

Uttar Pradesh Chief Minister Yogi Adityanath reviewed the law and order situation in each district and appealed for peace.

Meanwhile, UP Additional Director General of Police (Law and Order) PV Ramasastry told PTI that adequate forces have been provided to Ayodhya and all sensitive districts of the state in good measure.

"Stress has been laid on confidence-building measures," he said, adding that police had undertaken patrolling and different sections of society, be it the dharma gurus, traders or academics had been contacted. "The basic aim of the outreach is to instil a feeling of security," he said.

ADG (Prosecution) Ashutosh Pandey said barricading had been strengthened at the place of the makeshift temple.

The entire town had been divided into 31 sectors and 35 sub-sectors, he said, adding that in case there was a surge of visitors, a "holding area" had been carved on the outskirts of the town so that people could be sent in batches for the darshan of Lord Ram.

Pandey said there was no ban on devotees coming to Ayodhya. Uttar Pradesh CM Adityanath had earlier said two helicopters would be on standby in Lucknow and Ayodhya as part of the security arrangements.

Adityanath also warned that strict action would be taken against anyone trying to disturb law and order.

The Centre had rushed around 4,000 paramilitary personnel to Uttar Pradesh while the Railway police cancelled leave of its force and stepped up vigil at 78 major stations and on trains as part of its security preparedness.

Delhi-  Delhi Police has beefed up security across the national capital and stepped up patrolling in sensitive areas in the city, officials said, adding social media platforms will also be monitored, police said.

Delhi Police will also initiate strict legal action against those found indulging in any activity which may adversely affect the peace and tranquillity of the society, a senior police officer said here.

Social media posts and WhatsApp messages that incite communal hatred or violence would draw severe punishment, including a jail term, for offenders, the Gautam Buddh Nagar administration said on Friday.

The offenders would not only be arrested but action against them would be taken under the Gangsters Act and the National Security Act (NSA), District Magistrate B N Singh said in an official statement.